NORTH PARK BLUES--Blues Specters, a San Diego based blues band playing a variety of blues standards with a focus on Chicago-style blues, will perform November 30, at the Lafayette Hotel, 2223 El Cajon Blvd., from 6 to 8 pm

Escondido's own Steve Fritzenkotter wails on the Slide Guitar, and Blayne Marleaux, who has played Lead Guitar for more decades than he wants to remember, lays down the riffs only a highly accomplished blues player can deliver.

Saxophonist Alex Peterson is a local horn-playing-blues legend. Southern California blues veterans Bassist Doug Hartwig and Drummer Glen Maiden provide the hip shaking backbone that gets those wild women off their bar stools and onto the dance floor! This group brings the energy, the crowds and the power of blues to rock the house!

11 BILLION MILES AWAY AND STILL TICKING


GUEST BLOG--NASA's Voyager 1 spacecraft has entered a new region at the far reaches of our solar system that scientists feel is the final area the spacecraft has to cross before reaching interstellar space.

The Voyager team infers this region is still inside our solar bubble because the direction of the magnetic field lines has not changed. The direction of these magnetic field lines is predicted to change when Voyager breaks through to interstellar space. The new results were described at the American Geophysical Union meeting in San Francisco on Monday.

"Although Voyager 1 still is inside the sun's environment, we now can taste what it's like on the outside because the particles are zipping in and out on this magnetic highway," said Edward Stone, Voyager project scientist based at the California Institute of Technology, Pasadena. "We believe this is the last leg of our journey to interstellar space. Our best guess is it's likely just a few months to a couple years away. The new region isn't what we expected, but we've come to expect the unexpected from Voyager."

Since December 2004, when Voyager 1 crossed a point in space called the termination shock, the spacecraft has been exploring the heliosphere's outer layer, called the heliosheath. In this region, the stream of charged particles from the sun, known as the solar wind, abruptly slowed down from supersonic speeds and became turbulent. Voyager 1's environment was consistent for about five and a half years. The spacecraft then detected that the outward speed of the solar wind slowed to zero.

The intensity of the magnetic field also began to increase at that time.

Voyager data from two onboard instruments that measure charged particles showed the spacecraft first entered this magnetic highway region on July 28, 2012. The region ebbed away and flowed toward Voyager 1 several times. The spacecraft entered the region again Aug. 25 and the environment has been stable since.

"If we were judging by the charged particle data alone, I would have thought we were outside the heliosphere," said Stamatios Krimigis, principal investigator of the low-energy charged particle instrument, based at the Johns Hopkins Applied Physics Laboratory, Laurel, Md. "But we need to look at what all the instruments are telling us and only time will tell whether our interpretations about this frontier are correct."

"We are in a magnetic region unlike any we've been in before -- about 10 times more intense than before the termination shock -- but the magnetic field data show no indication we're in interstellar space," said Leonard Burlaga, a Voyager magnetometer team member based at NASA's Goddard Space Flight Center in Greenbelt, Md. "The magnetic field data turned out to be the key to pinpointing when we crossed the termination shock. And we expect these data will tell us when we first reach interstellar space."

Voyager 1 and 2 were launched 16 days apart in 1977. At least one of the spacecraft has visited Jupiter, Saturn, Uranus and Neptune. Voyager 1 is the most distant human-made object, about 11 billion miles (18 billion kilometers) away from the sun. The signal from Voyager 1 takes approximately 17 hours to travel to Earth. Voyager 2, the longest continuously operated spacecraft, is about 9 billion miles (15 billion kilometers) away from our sun. While Voyager 2 has seen changes similar to those seen by Voyager 1, the changes are much more gradual. Scientists do not think Voyager 2 has reached the magnetic highway.

The Voyager spacecraft were built and continue to be operated by NASA's Jet Propulsion Laboratory, in Pasadena, Calif. Caltech manages JPL for NASA. The Voyager missions are a part of NASA's Heliophysics System Observatory, sponsored by the Heliophysics Division of the Science Mission Directorate at NASA Headquarters in Washington.

For more information about the Voyager spacecraft, visit: http://www.nasa.gov/voyager and http://voyager.jpl.nasa.gov .
0 comments

SEEING IS BELIEVING--Green flashes are real (not illusory) phenomena seen at sunrise and sunset, when some part of the Sun suddenly changes color (at sunset, from red or orange to green or blue). The word “flash” refers to the sudden appearance and brief duration of this green color, which usually lasts only a second or two at moderate latitudes. 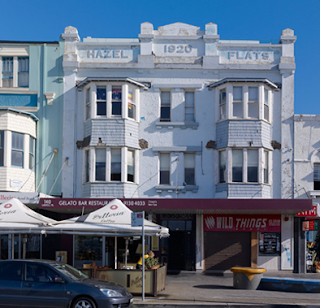 EXCELLENCE IN READAPTIVE—Often the temptation—especially among young architects—is to take an older building and remuddle it into modernism by destroying its vintage character.  Not so with Australia’s MPR Design Group, who achieved two main goals with a 2010 project in the City of Bondi.  First, they maintained a great looking retail façade and two, created a dramatic and wholly contemporary rooftop penthouse for the next millennium.  Pictures tell the
rest.

ARCHIVE / WHAT’S UP ON MARS? HAS MANKIND FOUND LIFE ON ANOTHER PLANET?

BIG NEWS LOOMING—NASA scientists involved with Mars Curiosity Rover have indicated something is up.  They won’t tell us fearing it may be a false alarm.  NASA.gov usually does a good job of updating its webpage with new Curiosity rover shots.  But for the past few weeks it has stopped posting new images.  The site has paused on the following photo, near five scoops of soil.

What was in the scoops?
The neighborhood hasn’t been this excited about scoops since Baskin-Robbins ice cream store shut down.

Did they find something here that could prove life exists on other planets?  Or, did they find a piece of other failed missions?

Whatever it is NASA is mum but has promised to communicate sometime after the first of December.

They have said the new finding has the potential to rewrite the history books.

If so, what amazing good fortune to be alive at such a time.

Here’s what NASA.gov Curiosity image gallery has paused on:

Five Bites Into Mars
NASA's Mars rover Curiosity used a mechanism on its robotic arm to dig up five scoopfuls of material from a patch of dusty sand called "Rocknest," producing the five bite-mark pits visible in this image from the rover's left Navigation Camera (Navcam). Each of the pits is about 2 inches (5 centimeters) wide.

93rd Martian day, or sol (Nov. 9, 2012). This image was taken later that same sol. A sample from that fifth scoop was analyzed over the next two sols by Curiosity's Sample Analysis at Mars (SAM) suite of instruments inside the rover. A second sample from the same scoopful of material was delivered to SAM for analysis on Sol 96 (Nov. 12). No further scooping of soil samples is planned at Rocknest.

The first Rocknest scoop was collected during Sol 61 (Oct. 7). Fine sand and dust from that scoopful and two subsequent ones were used for scrubbing the inside surfaces of chambers in the sample-handling mechanism on the arm. Samples from scoops three, four and five were analyzed by the Chemistry and Mineralogy instrument inside the rover. 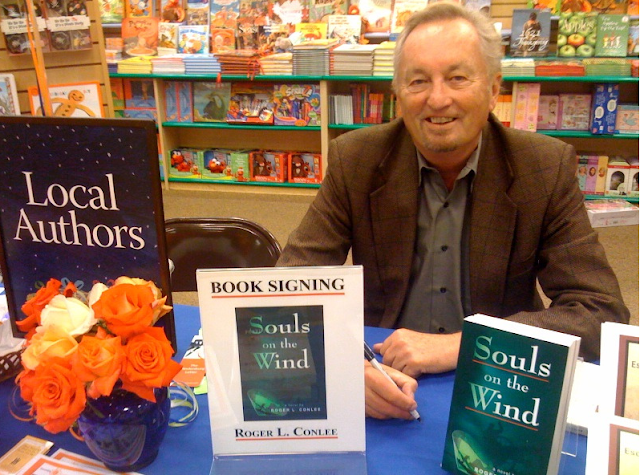 SUNDAY REVIEW EXCERPT---“Fog and Darkness” takes readers through the final year of World War II by depicting the dramatic events in the lives of two Americans, one a journalist and one a young Marine Corps officer. Time and again in great danger, these two men experience the war in highly contrasting ways, but their lives intersect at crucial points and they come together to forge a close bond of friendship. Although a work of fiction, the novel describes this epic conflict’s major events with Conlee’s trademark historical accuracy.


FROM FOG AND DARKNESS:
“…Operation Stalemate finally ended, after three more bitter days and nights. Some well-placed aerial napalm, 75-millimeter hammer blows from the tanks, and a gallant charge by what was left of the Seventh Marines plus some GIs from the 81st, brought the death storm to an end.

One ragged, emaciated scarecrow emerged from a cave with his arms up, bowed from the waist, and immediately flew into bloody pieces from bursts of machine-gun fire. Normally, Kenny would have jumped in and said, “No, don’t do that,” but he was just too tired to give a damn. He later learned that this had been the last of more than 10,300 Japanese to die on Peleliu, where the predicted three-day battle had taken forty-five days. 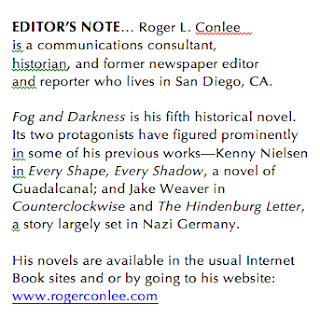 An unearthly silence fell over the island. Someone raised a tattered American flag on the top of Bloody Nose Ridge but no one cheered. The surviving Marines were too far around the bend for that. Some were so far beyond exhaustion they didn’t even look up and notice. Kenny hung his head and began to weep.

Later, his only surviving second louie reported with the roster tally. Able Company was down to forty-two men. Sixty percent casualties! Kenny felt like a failure. More tears formed. “Thanks,” he said, putting the report down. “Now get out of here.” Didn’t want his men to see him crying.

He shambled to an aid station and got his arm stitched up. “Another fucking Purple Heart,” he murmured. “Nah, I’m not even gonna put in for it.” He saw a dead Marine being covered up and asked, “How did this poor guy get it?”

A corpsman shook his head sadly and said, “He wasn’t hit all that bad, but he bled to death over a period of eight or nine hours, just because we didn’t have any more goddamn blood or antihemorrhagic to give him. We ran out of everything.”

ARCHIVE / ONE OF A KIND SHOPS IN NORTH PARK

LOCAL ORIGINALS—By Holden DeMayo.  I’ve lived in North Park, an urban neighborhood in San Diego that was founded in the early 1900s, since I attended Roosevelt Jr. High in the mid 1950s.  Makes me a veteran local.  And, I’ve seen the businesses come and go.

Fortunately for North Park the good guys stick around.

North Park is located north and west of Balboa Park, this community of 150,000 is home to many one of a kind small business.  Here are examples of classic originals (non-chain) located in historic North Park.  Those highlighted in red have been open in North Park for generations.  The folks on this list I’ve spent money with and they’ve never steered me wrong.

Note: This list is not affiliated with the North Park Community Assn. or North Park Main Street, but for a big NP Main Street promotional listing go to the following site:
https://mail.google.com/mail/u/0/?tab=wm#inbox/13b2f9bed9594c64