GUEST BLOG / By Joe Biden, former U.S. Vice President—Late last month, we all saw something I never thought possible even in my wildest imagination: An American President standing on the world stage taking the word of a Russian leader over that of America's own intelligence community. Think about that. This President believed Vladimir Putin's preposterous denials and rejected the overwhelming evidence presented by America's intelligence leaders who have taken a sworn duty to protect our nation. In short, he took Putin's word over America's.

It was a performance that was shocking, shameful, and beneath the office of the President.

Folks, flattering dictators does not advance American interests. It makes us less safe.

Attacking the values that make our democracy strong — including strong institutions, the rule of law, a free press, and fair elections — does not help us lead abroad.

When our president had the chance to confront our number one adversary — who continues to attack our democracy and our allies — he instead chose to embrace him.

He blamed America rather than Russian aggression for the deterioration of our bilateral relations. Trashed his own Department of Justice. And put Vladimir Putin's word above that of our own intelligence community — whose very leaders he appointed.

If we ever needed a demonstration of why elections matter, we saw it last Monday in Helsinki. Our values, our leadership in the world, and our national security were all put at risk.

Readers of PillartoPost.org, we don't just have the opportunity — we have the urgent responsibility as citizens to make a dramatic change in this country's leadership this year.

Every day from now until November 6 and beyond, I'm doing everything that I can to support true American leadership up and down the ballot. And right now, I'm asking you to join me.

We have to make it clear that we believe in democracy over dictatorship, that we support our allies and not those who seek to weaken us, and that we will defend our freedom when it is attacked.

The very best way to do that right now? Participate in the democratic process in the most fundamental way. Educate yourself about the leaders running for office who represent our shared vision for the future.

Emilio Gutiérrez's release is a victory for press freedom

Gutiérrez's release from a detention facility in El Paso, Texas, will allow him to embark on a Knight-Wallace journalism fellowship at the University of Michigan as he continues to press his case for asylum in the United States. 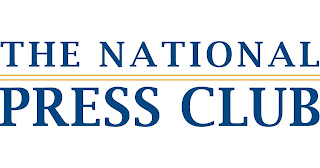 The legal battle to secure his release galvanized 19 professional-journalism organizations and human-rights groups on behalf of the Mexican reporter, who sought asylum in the United States after his work made him the target of death threats in his home country. He and his son, Oscar, (pictured, above) had been held in detention since Dec. 7, 2017.

"While we deeply regret the long detention of a reporter who violated no laws of this country, we are thrilled that, ultimately, common sense and American values have prevailed in this case," said Kathy Kiely, press freedom fellow for the Press Club's non-profit Journalism Institute, which organized the Gutierrezes' defense.

"We want to thank our partners in this effort, especially those whose persistent work or key interventions kept Emilio's hopes alive during these long months," Kiely added: "Reporters Without Borders, the Committee to Protect Journalists, the Reporters' Committee for Freedom of the Press, U.S. Rep. Beto O'Rourke, D-Texas, Bishop Mark Seitz of El Paso, Lynette Clemetson of the Knight-Wallace Fellowships, Penny Venetis of the Rutgers University Law School and the many, many other lawyers who volunteered their time to assist Eduardo Beckett, Emilio's indefatigable legal advocate in El Paso."

In June, when acting ICE Director Thomas Homan spoke at an event at the Club, NPC President Andrea Edney made a personal appeal on Gutiérrez's behalf.

"Though it has been far too long an ordeal, especially for Emilio," said Edney, "we are ecstatic and relieved to welcome him back into the ranks of a free press, and to send the message that truth-tellers are still protected in the country that enshrines free speech in its Bill of Rights."

The legal settlement came six days before the government was due to appear at a hearing before federal Judge David Guaderrama to argue for their continued detention. Lawyers representing Gutiérrez had argued that the detention was ordered, in part, in retaliation for the reporter's criticism of U.S. immigration policies. In ordering the hearing, Judge Guaderrama said there was sufficient evidence to suggest the case be reviewed.

The judge cited an ICE official's admonition that Gutiérrez's press allies should "tone it down," delivered to Press Club Executive Director Bill McCarren while McCarren was in El Paso last December to plead for their release. Guarderrama expressed his concerns about a potential violation of free speech rights of the Gutierrezes'.

Gutiérrez now will head to Ann Arbor, Michigan, for the prestigious Knight-Wallace Fellowship, which funds one academic year for a select group of accomplished journalists from around the world, allowing them to pursue individual research and collaborative skill building at the University of Michigan.

"This settlement represents a significant show of support for press freedom," said fellowship director Lynette Clemetson, who met with Gutiérrez at the El Paso detention facility to invite him to join the 2018-19 class as a special Press Freedom Fellow. "It is important that Americans demonstrate in very tangible ways our commitment to the vital role of journalism in democratic societies. There is a full community of support in Ann Arbor, eager to welcome Emilio, to restore his wellbeing, and to help him resume the journalism work that means so much to him."

Gutiérrez fled Mexico in 2008 after being threatened multiple times over his reporting of official corruption. He entered the United States legally, through an official port of entry in New Mexico, requesting asylum for himself and his then-15-year-old son, Oscar. Initially, immigration authorities separated and confined father and son, but in 2009, U.S. officials determined that Gutiérrez had a "credible fear" of returning to his home country and paroled them. While awaiting adjudication of their asylum case, they lived in Las Cruces, New Mexico, eventually making a living by operating a food truck.

In July, 2017, however, an El Paso immigration judge denied their asylum claim. He questioned Gutiérrez's journalism credentials and argued that the Mexican government could protect the reporter. In a friend-of-the-court brief that helped win a review of that decision, the Press Club and other journalism groups presented more than 100 of Gutiérrez's newspaper clippings, unearthed by Mexico State University Professor Molly Molloy, as well as many reports by expert groups outlining the dangers facing journalists in Mexico.

The brief was drafted, pro bono, by First Amendment lawyers Chuck Tobin and Steve Zansberg of the Ballard Spahr firm and Mark Flores of Littler Mendelson. All three lawyers are former journalists; Tobin is a member of the National Press Club.

While his case was on appeal, Gutiérrez was invited to the Club to accept the John Aubuchon Press Freedom award on behalf of journalists in Mexico, now the most dangerous country in the western hemisphere for reporters, according to Reporters Without Borders.

Weeks after his speech at the Club, during a routine check-in, immigration officials handcuffed Gutiérrez and his son and announced they were deporting them, despite a pending appeal in his asylum case. An 11th-hour phone call from the Board of Immigration Appeals stopped the deportation, but ICE detained the two men and refused to let them go, even after the BIA ordered a review of the asylum denial.