THANK YOU, NPR—Adding wow to the common egg is what NPR’s “The Salt” column is all about as it reports on Michael and Donna Turner Ruhlman’s egg-citing new book.

Michael is the 2012 James Beard Foundation Award winning chef.
The book is more eggy than edgy is simply called: “Egg, A Culinary Exploration of the World’s Most Versatile Ingredient.”

Chef Ruhlman points out “...We don't treat our eggs very well.” He adds, “take scrambled eggs. It's one of the most overcooked dishes in America...we kill our eggs with heat."

For NPR’s article, complete with two recipes from the book click the following: 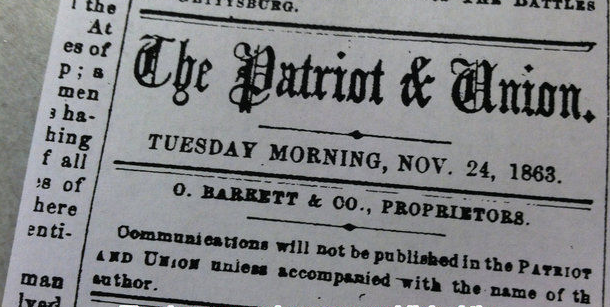 NEWSPAPER APOLOGIZES: NEVER TOO LATE TO GET IT RIGHT.

Editor's note: In 1863, The ancestor newspaper of today's Patriot & Union devoted all of one paragraph to Lincoln's Gettysburg Address: "We pass over the silly remarks of the President. For the credit of the nation we are willing that the veil of oblivion shall be dropped over them, and that they shall be no more repeated or thought of."

Seven score and ten years ago, the forefathers of this media institution brought forth to its audience a judgment so flawed, so tainted by hubris, so lacking in the perspective history would bring, that it cannot remain unaddressed in our archives.

We write today in reconsideration of “The Gettysburg Address,” delivered by then-President Abraham Lincoln in the midst of the greatest conflict seen on American soil. Our predecessors, perhaps under the influence of partisanship, or of strong drink, as was common in the profession at the time, called President Lincoln’s words “silly remarks,” deserving “a veil of oblivion,” apparently believing it an indifferent and altogether ordinary message, unremarkable in eloquence and uninspiring in its brevity.

In the fullness of time, we have come to a different conclusion. No mere utterance, then or now, could do justice to the soaring heights of language Mr. Lincoln reached that day. By today’s words alone, we cannot exalt, we cannot hallow, we cannot venerate this sacred text, for a grateful nation long ago came to view those words with reverence, without guidance from this chagrined member of the mainstream media.

The world will little note nor long remember our emendation of this institution’s record – but we must do as conscience demands:

In the editorial about President Abraham Lincoln’s speech delivered Nov. 19, 1863, in Gettysburg, the Patriot & Union failed to recognize its momentous importance, timeless eloquence, and lasting significance. The Patriot-News regrets the error.
Below is an excerpt of the opinion piece that was published in the Patriot & Union on  November 24, 1863:

A Voice from the Dead
We have read the oration of Mr. Everett. We have read the little speeches of President Lincoln, as reported for and published in his party press, and  we have read the remarks of the Hon. Secretary of State, Wm. H. Seward, all delivered on the occasion of dedicating the National Cemetery, a plot of ground set apart for the burial of the dead who fell at Gettysburg in the memorable strife which occurred there between the forces of the Federal Government and the troops of the Confederacy of seceded States.

To say of Mr. Everett's oration that it rose to the height which the occasion demanded, or to say of the President's remarks that they fell below our expectations, would be alike false.

Mr. Everett failed as an orator, because the occasion was a mockery, and he knew it, and the President succeeded, because he acted naturally, without sense and without constraint, in a panorama which was gotten up more for his benefit and the benefit of his party than for the glory of the nation and the honor of the dead.

We can readily conceive that the thousands who went there went as mourners, to view the burial place of their dead, to consecrate, so far as human agency could, the ground in which the slain heroes of the nation, standing in relationship to them of fathers, husbands, brothers, or connected by even remoter ties of marriage or consanguinity, were to be interred.

To them the occasion was solemn; with them the motive was honest, earnest and honorable. But how was it with the chief actors in the pageant, who had no dead buried, or to be buried there; from none of whose loins had sprung a solitary hero, living or dead, of this war which was  begotten of their fanaticism and has been ruled by their whims?

They stood there, upon that ground, not with hearts stricken with grief or elated by ideas of true glory, but coldly calculating the political advantages  which might be derived from the solemn ceremonies of the dedication.  We will not include in this category of heartless men the orator of the day;  but evidently he was paralyzed by the knowledge that he was surrounded  by unfeeling, mercenary men, ready to sacrifice their country and the liberties of their countrymen for the base purpose of retaining power... 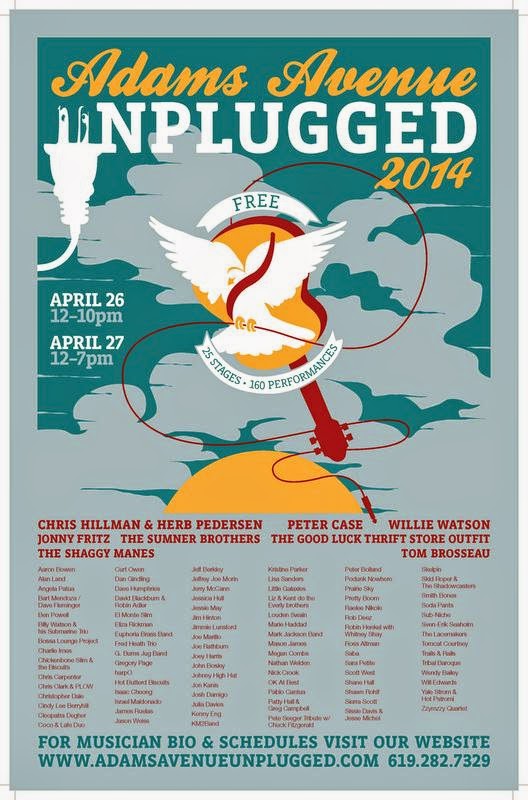 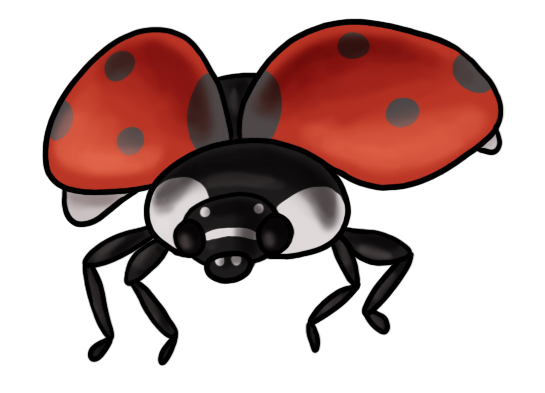 ALL GONE UPDATE: Nursery reports shipment of Ladybugs has been exhausted. No more available for annual giveaway.

Why would you want to attract ladybugs to your garden? Ladybugs are beneficial insects, or good bugs. They eat bad bugs, the pest insects like aphids, thrips and spider mites that feed on your garden plants. A single ladybug can eat over 5,000 aphids in its life. So, they are great workers in your garden helping you to keep out the bad bugs. Encourage ladybugs into your garden by adding plants that they are attracted to.

Here are ten plants that attract Ladybugs and other beneficial insects.

Agastache - has spikes of blue or lavender tubular shaped flowers and aromatic foliage with a lemon-peppermint fragrance. This perennial is a favorite of ladybugs, butterflies, hummingbirds and gardeners alike.

Dill - has feathery green foliage that stands tall in the back of herb gardens. But, don't just plant it there, mix it in with your perennial flowers. It attracts butterflies and ladybugs. Dill has clusters of pretty yellow flowers. Its also great used to season fish dishes or to incorporate in salads.

Lobelia - has brilliant blue or white flowers that are a favorite of hummingbirds. Plant them in container gardens and beds that receive full to partial sun.

Scabiosa - is known as the Pincushion flower. If you look closely at its blooms you will see why. The lavender flowers look like a pincushion with sewing needles. They bloom profusely from early spring through summer. Plant this perennial in a sunny spot for you and the ladybugs to enjoy.

Coneflowers (pictured) - Echinacea, or Coneflowers are a favorite summertime perennial that attract ladybugs, butterflies and hummingbirds. Best known as the Purple Coneflower there are many different varieties available today in all sorts of shades of purple, white, orange, yellow, pink, red and peach. Plant in full sun and enjoy these hardy perennials that don't require much extra water once they are established.

Coreopsis - is another hearty perennial that blooms profusely through the heat of the summer. While ladybugs and butterflies love it, its not a favorite of deer and can be planted in a deer resistant garden. Plant in full sun.

Lavender - there are many different types of lavender and they all attract ladybugs and butterflies. Their spikes of lavender or blue flowers are also prized for their fragrance and used dried in potpourris. Plant them as a hedge in your herb garden, in a mass in a waterwise landscape or in container gardens in full sun.

Milkweed (Asclepias) - is also called Butterfly weed and is known as a butterfly magnet, but they aren't the only beneficial insect that loves Milkweed, ladybugs do too. The beautiful flowers of Milkweed  are either yellow, orange, or red and yellow mixed. Plant them in a sunny spot.

Yarrow - is one of the easiest perennials to grow. Beautiful clusters of flowers in yellow, pink, or white sit atop fern like foliage. Yarrow is beautiful planted in mixed perennial borders and makes an excellent cut flower for drying. Plant in full sun and once it is established it requires little extra water.

Cosmos - has pretty daisy-like flowers that are available in pink, white, red, and yellow. They are easy to grow in beds and containers. Ladybugs are attracted to their delicate fern-like foliage. Plant them in full sun for spring and summer blooms.

TOUR TICKETS STILL AVAILABLE--Walk up tickets for the annual Mission Hills Heritage Home Tour can be purchased at Espresso Mio, 1920 Ft. Stockton Drive (checks and cash only).  The 60 to 90 minute tours leave every 15 minutes.  The tour will cover the Sierra Vista area of West Mission Hills, which includes architectural styles ranging from Spanish Eclectic, Mission Revival to Spanish Revival.

Neighborhood History:
One of San Diego's oldest and best preserved neighborhoods, Mission Hills features historic homes in a variety of styles including Craftsman Bungalows, Prairie Homes, and Spanish and Mission Revival. For over 100 years it has been a thriving residential and commercial community with lush canyons and mature tree-lined streets. Its first home, Villa Orizaba, was built in 1887 and subsequent subdivisions such as the original Mission Hills, Inspiration Heights, Florence Heights and others were developed in the early 20th century. Some of San Diego's finest architects and master builders designed and built homes in the area. The architectural diversity of the neighborhood is one of its finest features today. Mission Hills Heritage works to preserve and protect the character, charm and historic resources of Mission Hills, assuring that development projects harmonize with the established community.

To get involved with Mission Hills Heritage log on to: