COZING UP TO THE RED PLANET

THE OPPOSITION OF MARS—Guest Blog: By NASA’S Dr. Tony Phillips @Science.Gov--By the time you finish reading this story, you'll be about 1,000 km closer to the planet Mars.

Earth and Mars are converging for a close encounter. As March gives way to April, the distance between the two planets is shrinking by about 300 km every minute.  When the convergence ends in mid-April, the gulf between Earth and Mars will have narrowed to only 92 million km (57.1 million miles)--a small number on the vast scale of the solar system. 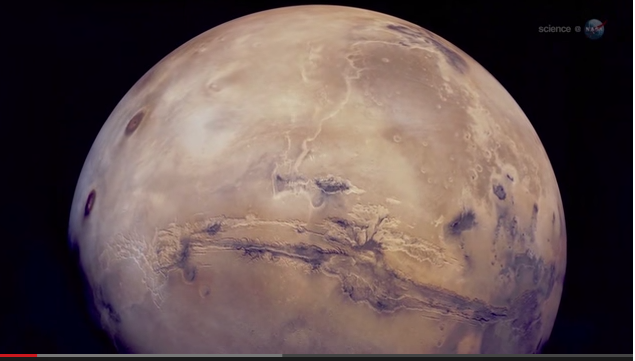 UPDATE:  Remarkably, as Mars arrives closest to Earth, there will be a total lunar eclipse.  The full Moon of April 14-15 will turn as red as the Red Planet itself.

San Diegans will see the lunar eclipse beginning at 10 pm, April 14 with the full eclipse nearing at midnight and the show will end at 3:30 am on April 15.

Astronomers call this event an "opposition of Mars" because from Earth Mars and the Sun are on opposite sides of the sky.  Mars rises in the east at sunset, and soars almost overhead at midnight, shining burnt-orange almost 10 times brighter than a 1st magnitude star.

Oppositions of Mars happen every 26 months. Of a similar encounter in the 19th century, astronomer Percival Lowell wrote that "[Mars] blazes forth against the dark background of space with a splendor that outshines Sirius and rivals the giant Jupiter himself."  In other words, it's really easy to see.  The next opposition will be May, 2016. 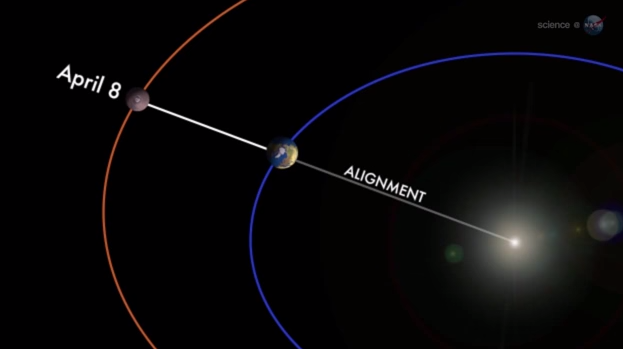 There are two dates of special significance:
April 8th is the date of opposition, when Mars, Earth, and the sun are arranged in a nearly straight line.

On April 14th, Earth and Mars are at their minimum distance: 92 million km, a six month flight for NASA's speediest rockets. You won't have any trouble finding Mars on this night. The full Moon will be gliding by the Red Planet in the constellation Virgo, providing a can't-miss "landmark" in the midnight sky.

Although these dates are special, any clear night in April is a good time to look at Mars.  It will be easy to see with the unaided eye even from brightly-lit cities.  With a modest backyard telescope, you can view the rusty disk of Mars as well as the planet's evaporating north polar cap, which has been tipped toward the sun since Martian summer began in February. Experienced astro-photographers using state-of-the-art digital cameras can tease out even more—for example, dust storms, orographic clouds over Martian volcanoes, and icy fogs in the great Hellas impact basin. The view has been described by some observers as "Hubblesque."

More information:
The distances and velocities cited in this story were calculated by JPL's online HORIZONS ephemeris.  All velocities are correct for March 31, 2014.
Oppositions of Mars happen every 26 months. The racetrack model of planetary orbits explains why.  Earth and Mars are like runners on a track. Earth is on the inside, Mars is on the outside.  Every 26 months, speedy Earth catches up to slower Mars and laps it.  Opposition occurs just as Earth takes the lead.

Because planetary orbits are elliptical, not all oppositions are the same.  In 2003, Mars made its closest approach to Earth in 50,000 years, an apparition that mesmerized sky watchers all over the world.  The 2014 opposition of Mars is a much more "run-of-the-mill" opposition--not historic, but beautiful nonetheless.