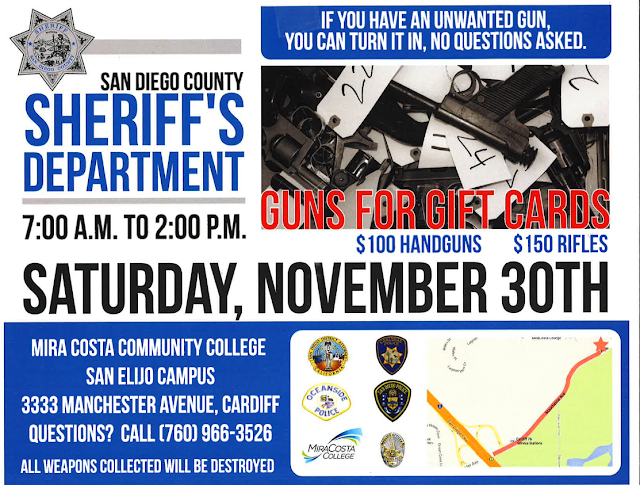 Editor’s note: Beth and Steve Hagman retired nine years ago and moved to Ireland.  But after growing weary of the rain in the Emerald Isle, these former North Parkers have recently taken up residence in the sunny South of France.

A PRIMEUR—Travel By Beth Hagman--“...It’s been a busy week here in France… our first Primeur event, our first French Christmas market, we finally get our little French auto today and we’re driving it 6 hours to visit friends up near Tours tomorrow, sharing Thanksgiving with them. 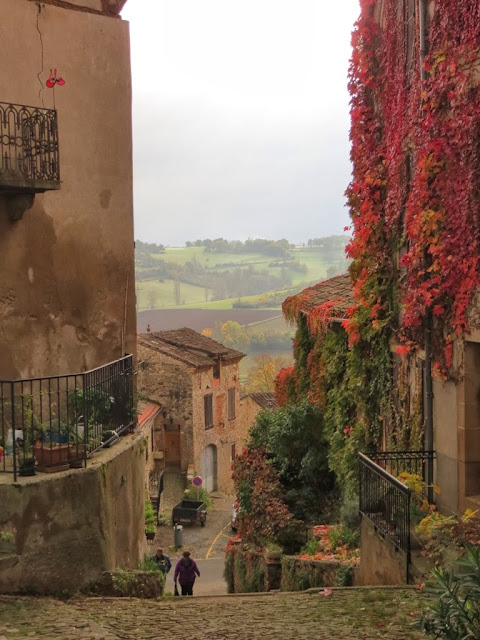 A Primeur is the first tasting of this year’s wines, and this year Gaillac area wines all did theirs last weekend. We have quite a nice family-run winery in own own village, Domaine Salvy -- we had met the owner on one of our daily walks and got a personal invitation. We had to walk maybe 100 meters to their primeur, held in a big modern barn built next to Patrick and Anne’s home -- their parents live on the other side of the village. The whole family was there, along with a few vendors (selling crepes, cheeses, pates, honey, maccarons and chickpea products including flour, bread and oil). There was a band, and oysters, mini quiches, bites of cheese bread and a local dish of tripe and potatoes to accompany the wine tasting. When we arrived, there was a good sized group sipping and singing -- people came from all over, it’s a big social event as well as an opportunity to taste and buy the new wines. Dave and Diane Smith (the people we replaced as caretakers) came, and we had a nice chat with them… We’re still struggling when it comes to carrying on any real conversation in French, but the local folk have been very forgiving. 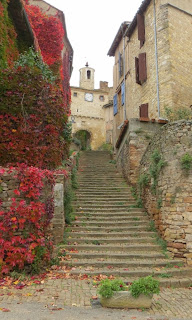 Sunday was the first Marche de Noel of the season -- nothing to do with marching, marche means market. The little towns in the area have small, one-day Christmas markets, usually on Sunday, while the cities -- Toulouse, Albi and Carcassonne -- have bigger ones, often extending through Advent. Since we’re not going to our beloved German markets this year, we’re determined to make the most of local events.

The first was in Cordes-sur-Ciel (Cordes in the sky) -- one of the better-known bastide towns in our area, a place we’d been intending to explore. So we parked at the bottom of the hill and climbed the steep cobbled streets to the top, where the market is held in a covered square. The walk up (and back down) through the bastide, with amazing views, interesting old houses and shops, was the best part of the day. The market itself was very small, and nothing like a German market. There was one food vendor with some kind of stew and cake and little plastic cups of hot spiced wine that we liked very much, though it bears little resemblance to gluwein. The local crafts on display were uninspired, though there was some nice pottery, a Santa who played Christmas carols on the saxophone and a lovely honey that we bought after having a taste. 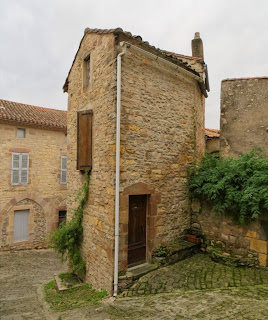 A bastide, by the way, is a walled town built circling the top of hill for protection, generally during the 12-13th centuries in response to the raging religious wars of the era. They are similar to the hill towns of Tuscany, and there are lots of them, though Cordes has maintained its historical character better than most. It has an inner wall, and then an outer wall built toward the end of the 13th century, when growing population pressure required more space.

There are also small walled towns along the Tarn river, different from the bastides because they are built on the flat, usually on bluffs above the water. We visited Lisle-sur-Tarn a couple of weeks ago, a walled town on the river, known for its weekly market in the arcaded square. Full of cats and fun to walk around, with narrow streets and old stone buildings.

WE ARE THE WIND

Wind is invisible;
yet we feel it flow around us
ever so slightly
or in exuberant gusts.

The wind cannot be bought
or caught  in your hands
like those Nebraska
fireflies
yet the wind is always with us,
it never sleeps,
it never leaves us.
We are the wind.

THE BEER REPORT—Two stories here on craft beer.  First, it’s going to be the most wonderful time of the year—for craft beer! Displaying the spirit, passion and imagination of America’s small and independent brewers, CraftBeer.com —the beer lover-oriented site of the Brewers Association (BA)—released a list of winter seasonal craft beers produced by BA members.  San Diego County makes the list, which is very cool because only 11 winter offerings are singled out nationally.

Second, Draft Magazine, one of America’s respected beer journals has come out with its 100 best best beer bars for 2013.  We localize the story by excerpting what Draft Magazine picks for the San Diego region.

Says Draft Magazine editors, “...As craft beer has exploded, so has the number of incredible places that serve it. This list celebrates those special haunts with less than three locations and one passionate focus: beer. There might be darts and a jukebox or candlelight and a turntable; there might be five beers or 500. But in every spot on our list, you’ll find an excellent brew in your glass and people—staff, owners, barflies—who care about that as much as you do.”

Visit CraftBeer.com’s “Winter Craft Beers are Comin’ to Town” for even more craft beer winter seasonals and descriptions and consider a tour to your local craft brewery or bottleshop for Xmas gift ideas.

Blind Lady Ale House
Peep where your pint of Automatic Transition Pale Ale’s made (hint: in BLAH’s back room) while waiting for an artisan pizza, or get sucked in by walls of vintage cans, retro beer murals and random kegs knocking about this trendy yet beer-serious bar. 3416 Adams Ave., blindlady.blogspot.com

Encinitas Ale House
A few blocks from the surf sits this shaded, hole-in-the-wall beer paradise. Grab a Belgian rarity from the 350-bottle list, a gargantuan garlic burger and a bit of breeze before heading back to the beach. 1044 S. Coast Highway 101, encinitasalehouse.com

Hamilton’s Tavern
Amid San Diego’s crème de la crème beer scene, this neighborhood alehouse is a simple mainstay that brings the best of beer and fun. Sure, hundreds of tap handles dangle from the high ceilings, but the locals here nosh on comfort food from the adjacent café and chat about more than what’s on the taps (and two casks!) or in their bottles (more than 200). 1521 30th St., hamiltonstavern.com

Small Bar
From the wooden abbey-style front door to the pointed arch back bar to the moody red-and-black décor, this tiny University Heights spot is Gothic-chic. Beware the looming keg suspended from the ceiling—and limited elbow room—as you peruse the mostly local taps inside this cute watering hole. 4628 Park Blvd., smallbarsd.com

Thanks to San Diego’s West Coastersd.com for assisting in this report
0 comments

AMERICA’S FIRST INTERSTATE--The Lincoln Highway was the first transcontinental improved highway for automobiles across the U.S.  It was formally dedicated on Oct. 31, 1913. A century ago, paved highways like those we take for granted, were few in numbers and often nothing more than dirt ruts, especially outside city limits.

As corporate America embraced the automobile, industrialists were keen on the reality of a nationwide network of roads, especially one that ran coast to coast.

But the Lincoln Highway wasn’t a planned roadway construction job.  Instead it was a patchwork of existing highways that became the signed highway.  Since 1913, the constantly changing Lincoln Highway runs from New York City’s Times Square to Lincoln Park at the Western edge of San Francisco.

The first officially recorded length of the entire Lincoln Highway in 1913 was 3,389 miles. Over the years, the road was improved and numerous realignments were made, and by 1924 the highway had been shortened to 3,142 miles. Counting the original route and all of the subsequent realignments, there is a grand total of 5,872 miles.  Back then the trip by car took a month.  A century later you can drive the transcontinental Lincoln Highway in a week or less.

Today, the Lincoln Highway Association has identified the old route via Google Maps.