ENERGY SAVVY HOMES--San Diegans are invited to tour two older houses in North Park and South Park on Saturday Aug. 30 that have been transformed into energy-efficient homes. The free home tours are sponsored by the California Center for Sustainable Energy, a nonprofit organization that helps homeowners save energy, primarily through the statewide Energy Upgrade California Home Upgrade initiative.

The homes are at 2902 Juniper St. in North Park and 1421 Grove St. in South Park. The tours last from 10 a.m. to 1 p.m. "Both of these homes are prime examples of how vintage early 20th century houses can be upgraded to meet the energy and efficiency standards of today," said Bob Coleman, the center's demonstration home program manager. "Visitors will learn firsthand how they can make their homes more comfortable, safer and energy efficient."

POST OFFICE PROJECT REPORT—Andrew Keatts writing for Voice of San Diego’s virtual newspaper (voiceofsandiego.org) updates what’s happening with the development project at the old North Park Library.  VOSD names the names behind the project and explains why it didn’t have to be reviewed by the North Park Planning Committee.  Says Keatts, the project is set for more than 30 rental apartments and the old post office will be a 5,000 square-foot hub of retail/restaurant space.  For the entire article link to:  http://voiceofsandiego.org/2013/08/28/not-all-neighborhood-development-projects-fuel-community-angst/ 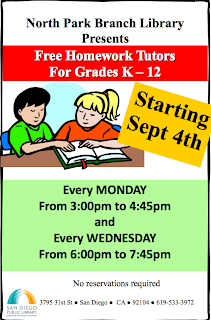 NORTH PARK LIBRARY ADDED VALUE—The library branch at North Park Way and 31st is offering free homework tutors from grades K-12 every Monday from 3 pm to 4:45 pm and every Wednesday from 6 pm to 7:45 on.
Again it’s a free service and no reservations are needed.  Begins September 4th.
Info: 619-533-3972.

RETRO COOL--The photo below was taken in 1948 when the Number 7 streetcar rolled through North Park via University Avenue.  The non-smog trolley ran on electricity.   Back in 1993 when University Avenue at 30th Street was being dug up to install the current North Park sign, workers located the old trolley tracks under the pavement.  It doesn’t take a detective to figure out those tracks are still under the streets of North Park.  Wouldn’t it be cool to have one of San Diego vintage trolley cars do a No. 7 loop from downtown via Park Blvd. then University Avenue to 30th then return south on 30th via (No. 2 bus line route) through South Park to downtown.   Granted this is not a new idea, but it’s still terrific to think about.

MIXED MEDIA—The Jazz Residency Project at the San Diego Museum of Art is presenting its final jazz concert of the summer, Thurs., 7 pm in Balboa Park.  The sound and image presentation offers the music of resident artist Mark Dresser with fellow musicians Nicole M. Mitchell, Michael Dessen and Myra Melford as they interpret the paintings of the late Don Reich and the photography of Moses Hacmon.

The concert is free with regular admission to the museum.   On concert night the Museum galleries will  be open until 9 pm and snacks and beverages will be available from a no-host bar.

MAXIMUM SPACE IN A MINIMAL STUDIO 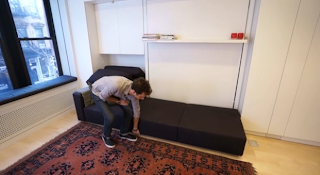 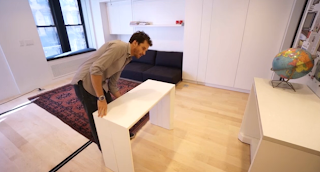 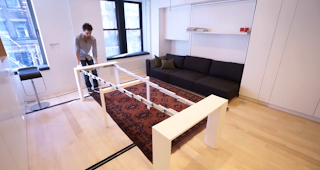 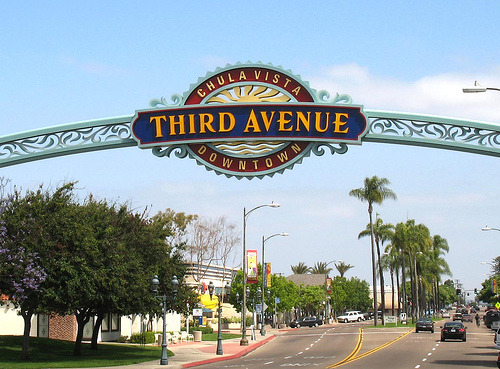 REMARKABLE GALAXY—OK, so the Chula Vista Little League lost to Japan for the world title.  Our local kids are still the best little leaguers in the U.S. and that’s still saying a lot.  This city of 250,000 located between San Diego and Tijuana, Mexico happens to be home to a remarkable collection of notable human beings.  Here’s what we mean:

Tom Waits—Top selling vocalist, who went on to international fame after graduating from Chula Vista’s Hilltop High School.  Waits has a distinctive voice, described by critic Daniel Durchholz as sounding "like it was soaked in a vat of bourbon, left hanging in the smokehouse for a few months, and then taken outside and run over with a car."

Jessica Sanchez—Professional singer, who came in second in the 11th season of the American Idol competition.  She is a native to Chula Vista and Eastlake.

Raquel Pomplun—Attended high school in Chula Vista and is a Southwestern College alum before becoming Playboy Magazine’s reigning Playmate of the Year for 2013.

John J. McGinty—Medal of Honor recipient resides in Chula Vista.  The following is what this U.S. Marine did to earn his Congressional Medal of Honor: For conspicuous gallantry and intrepidity at the risk of his life above and beyond the call of duty as Acting Platoon Leader, First Platoon, Company K, Third Battalion, Fourth Marines, Third Marine Division, in the Republic of Vietnam on 18 July 1966. Second Lieutenant (then Staff Sergeant) McGinty's platoon, which was providing rear security to protect the withdrawal of the battalion from a position that had been under attack for three days, came under heavy small arms, automatic weapons and mortar fire from an estimated enemy regiment.

With each successive human wave, which assaulted his 32-man platoon during the four- hour battle, Second Lieutenant McGinty rallied his men to beat off the enemy. In one bitter assault, two of the squads became separated from the remainder of the platoon. With complete disregard for his safety, Second Lieutenant McGinty charged through intense automatic weapons and mortar fire to their position. Finding 20 men wounded and the medical corpsmen killed, he quickly reloaded ammunition magazines and weapons for the wounded men and directed their fire upon the enemy. Although he was painfully wounded as he moved to care for the disabled men, he continued to shout encouragement to his troops and to direct their fire so effectively that the attacking hordes were beaten off. When the enemy tried to out flank his position, he killed five of them at point-blank range with his pistol. When they again seemed on the verge of overrunning the small force, he skillfully adjusted artillery and air strikes within 50 yards of his position. This destructive firepower routed the enemy, who left an estimated 500 bodies on the battlefield. Second Lieutenant McGinty's personal heroism, indomitable leadership, selfless devotion to duty, and bold fighting spirit inspired his men to resist the repeated attacks by a fanatical enemy, reflected great credit upon himself, and upheld the highest traditions of the Marine Corps and the United States Naval Service.

Ty Wigginton--Professional baseball player and Chula Vista High grad, who is currently with the Baltimore Orioles.

Charisma Carpenter—Actress, model, who is best known for her role as Cordelia Chase in the popular television series Buffy the Vampire Slayer and its spin-off series Angel, for which she was nominated for four Saturn Awards. She was a regular on ABC Family's The Lying Game.  In 2004, she appeared in Playboy magazine as a model.
0 comments