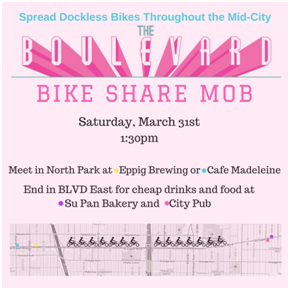 BIKE THE BOULEVARD THIS AFTERNOON

With all the commotion around dockless bikes in San Diego, did you know that in the first two weeks of operation, LimeBike company had 21,000 new users and 55,000 rides which equated to 25,000 pounds of CO2 saved?  These new, bright dockless bikes offer San Diegans and visitors alike an affordable, healthy, and convenient way to experience our city and navigate our daily lives.

This is tremendous! In hopes that all those riders are finding their way to The Boulevard and supporting local businesses, join the El Cajon Boulevard BIA to spread the Share Bike culture down the Boulevard to our BLVD East Hub TODAY Saturday March 31st. Grab a dockless bike and ride to Eppig Brewery or Café Madeleine at 1:30 pm. From there we will take off together down the Boulevard for a relaxing afternoon of light exercise and exploration.

Once in the BLVD East hub, check out the small businesses that give the hub between Talmadge and City Heights a distinctive laid-back culture. City Pub will offer riders their first drink for $2 with happy hour prices to follow, Su Pan Bakery will make up a special turkey croissant sandwich for $2.

We want to make sure the Bike Share opportunity is available to all of the communities that surround the Boulevard. We hope some of you will consider alternative means home, leaving your dockless bike behind for the surrounding communities to enjoy.
0 comments

THE BREWSPAPER / MIRAMAR MEADERY IN THE MEDALS

Editor’s note: Reposted with permission thanks to our media partners at www.westcoastersd.com, one of America’s leading free craft beer print publications and websites.

In the world of mead, the closest GABF equivalent is the Bloomfield, Colorado-based Mazer International Cup, which is an world competition for home and commercial mead makers. This past weekend, local operation Lost Cause Meadery earned a silver medal for its Devilish Grin mead, becoming the first commercial Southern California mead makers to medal. 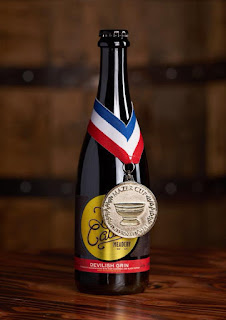 "Devilish Grin was made for our grand opening party. Since then, it's been one of the top sellers in the tasting rooms," said Billy Beltz, co-founder and mead maker.

Currently on tap and also available in bottles, Devilish Grin was entered in the competitive "open category" of semi-sweet wares. "It's basically a catch-all for a lot of different meads that don't fit into other specific categories," he said.  Lost Cause (and eatery) is located in San Diego’s Miramar district.  www.lostcausemead.com

This commercial mead, made with tart cherries and black pepper, is a twist on one that Beltz used to make as an amateur; that mead also medalled in the Mazer Cup's home competition. Three more of Lost Cause's current meads, Zydeco Buzz with coffee and chickory; FresYes with Fresno, Chipotle, and Ancho peppers; and Buck It All oak-aged all received medals as home-made meads.