RETRO FILES / GETTYSBURG OF THE WEST


UNSUNG BATTLE--Very few outside of historical academia, who focus on the American Civil War and battlefield buffs can recall the significance of the Battle of Glorieta Pass.

The outcome of the three days battle in the New Mexico Territory (March 26-28, 1862) was pivotal in keeping the entire West under federal control.

In keeping the South from invading the West, the Battle of Glorieta Pass (near Santa Fe, New Mexico) has been called the Gettysburg of the West.

Ironically, the South won the Battle of Glorieta Pass but lost the war.  Technically, Confederates forced the Union troops to retreat off the field of battle. But, because Union field officers (pre-battle) had decided to split their attack in two, one of the federal columns came across the 60 wagons containing rebel supplies.

Union troops easily overwhelmed the few guards that guarded the rebel supply wagon train, and as a result, the South had to retreat from Santa Fe to San Antonio, Texas.

The reason for the invasion was to capture the gold mines in Colorado and California to help fund the war effort.

If the opportunistic Union leadership had not destroyed the supply train, the rugged Confederates just might have had enough momentum to drive Union soldiers out of New Mexico and Colorado.  Then they would use Colorado as a base to invade California and capture the gold mines and seaports along the Pacific.


Wikipedia has a detailed profile on the Battle of Gorieta Pass:
http://en.wikipedia.org/wiki/Battle_of_Glorieta_Pass

Other battle descriptions can be found at:
http://militaryhistory.about.com/od/civilwar/p/glorietapass.htm

MEDIA MONDAY / HOW LEAD IN MY PENCIL GOT THERE 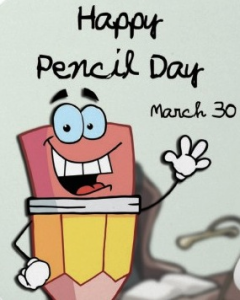 PENCILMANIA--Imagine learning that after living for decades “put some lead in your pencil” that there is no lead in real pencils.  Whom do we need to sack in the cliché development bureau?

After very little research, we discovered the "lead" pencil (which contains no lead) was invented in 1564 when a huge graphite (black carbon) mine was discovered in Borrowdale, Cumbria, England. The pure graphite was sawn into sheets and then cut into square rods. The graphite rods were inserted into hand-carved wooden holders, forming pencils.

But, on this day in 1858 pencils with attached eraser was patented by American Hyman L. Lipman of Philadelphia.

Welcome to the state of pencilmania:
--Today is Happy National Pencil Day celebrating Mr. Lipman.
--According to the Roanoke Times in Virginia, writer Robert Linsford pointed out “in Middle English the word, spelled pencel, meant “artist’s brush.” It was borrowed from Old French pincel or peincel, related to Modern French peinture “painting.” The French inherited the word from the Latin penicillus, for “little tail.”

Also: Do you know why pencils are yellow?

The emergence of Siberian graphite as the standard led manufacturers to associate pencils with the Orient by using names such as Mongol and Mikado and painting them yellow, a color associated with royalty and respect in China.

Pencils have their own blog: Pencils.com

HELLO, HARRY VENN--“Hidden” is one of those fast-paced UK private eye (four-part) series that gives viewers very little time to sit back and assess what the hell is going on.  But the non-stop action (and flashbacks) are part of the charm that actors Philip Glenister, David Suchet and Belgium’s Thelka Reuten skillfully portray as some of the shadiest characters in modern detective fiction (including the hero and heroine).

When life takes you into danger zones, time-outs aren’t part of the deal.

In case you missed it amongst Netflix’s vast menu of thrillers, the aptly named “Hidden” (2011) is a contemporary conspiracy thriller centered on a small-time private investigator, who is forced to revisit his past thanks to an unexpected visit from the proverbial mystery woman (this time a blonde lawyer in knee high leather boots.)

Discovering that a seemingly unrelated, unsolved pair of 20-year-old murders are dangerously linked to the death of his brother, solicitor Harry Venn quickly finds himself caught up in a much bigger and more complex conspiracy that reaches deep into the heart of the British political system.

RISE AND SHINE—Beer reporters are staying awake trying to keep up with the explosion in craft beer explorations.  Lots of press activity lately is keeping tabs on the free range pairing of craft beer with unexpected ingredients such as coffee.
Pizza Port, a multi-venue craft beer brewery/food operation in Southern California won a gold medal at a World Beer Cup competition in 2012 for one of its coffee beers.  Since then Bacon & Eggs has been award gold in 2013 and 2014 competitions. Called Pizza Port Bacon & Eggs Breakfast Coffee Imperial Porter, this specialty release remains one of the most sought-after in the San Diego area.  Last check, Pizza Port’s coffee creation was on tap at its Ocean Beach location.  Pizza Port uses coffee roasted at Bird Rock Coffee Roasters.
A call-in reviewer on www.ratebeer.com’s site last week called Bacon & Eggs by Pizza Port “Probably the best beer I had at Pizza Port Ocean Beach. Coffee and light roast and cocoa. Rich semi sweet beer with mild roast.”
By no means is craft beer with coffee the sole realm of Pizza Port.   Other top San Diego brewers have been buzzing their beer for some time.   Wreck Alley Imperial Stout from Karl Strauss Brewing Company not only contains coffee roasted locally from Ethiopian beans but has surrounded it with a great story.  You gotta love the copy writer’s art:  “Beneath the tides off Mission Beach rests Wreck Alley, Beneath the tides off Mission Beach rests Wreck Alley – a dark and mysterious seascape of forgotten ships.
“Amidst the rusted wreckage is a marine ecosystem, an artificial reef teeming with life. Our Wreck Alley is as dark as the depths of its namesake, an Imperial Stout of uncharted complexity. Brewed with darkly kilned malts, cocoa nibs, and Ethiopian coffee beans, Wreck Alley boasts rich layers of dark chocolate, toffee, and espresso-like roast. Save a bottle. This one has a stout shelf-life.” Ba-da-bing!
And, Karl Strauss also buys brew beans from Bird Rock Coffee Roasters, www.birdrockcoffeeroasters.com
Two major San Diego brewers tap local coffee roasters for the beans to add to brews. 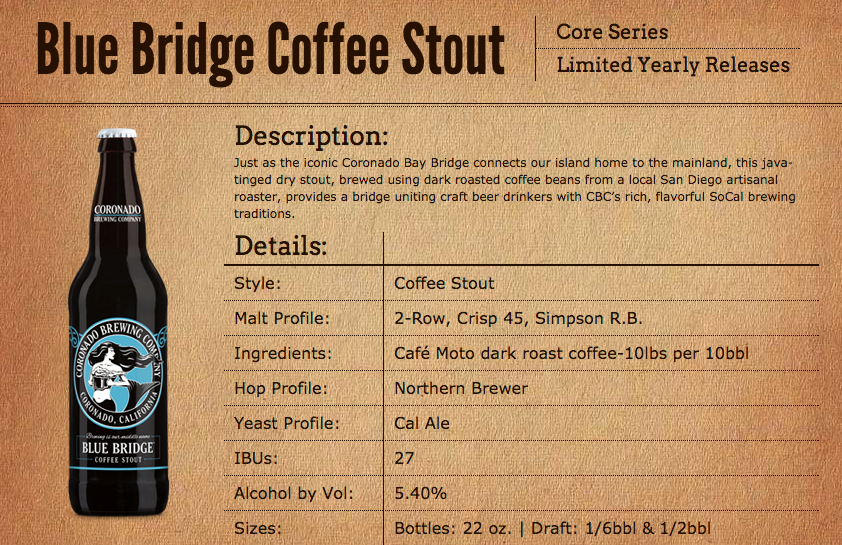 Coronado Blue Bridge Coffee Stout – Using 10 pounds of Café Moto coffee for every 10 barrels of beer, this 5.4% ABV creation is now available year round in 22 oz bottles and on draft. 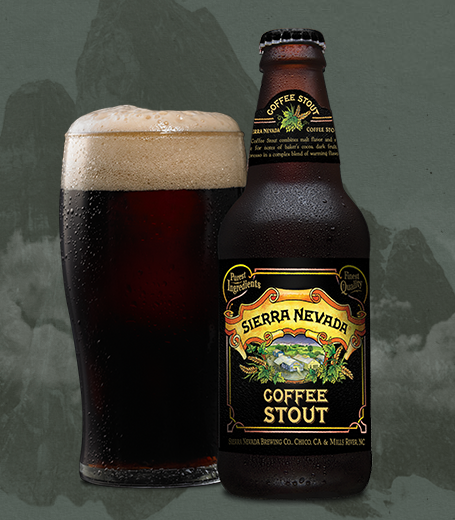 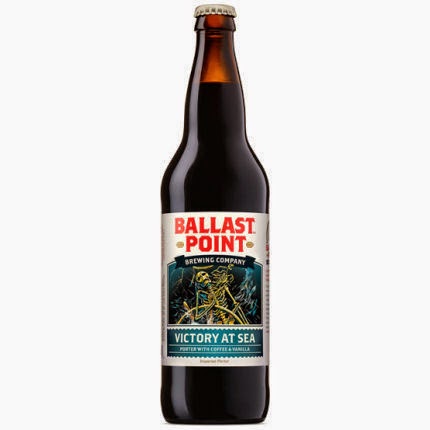 Coffee with beer is popular with brewers from coast to coast with examples being Sierra Nevada’s Coffee Stout and upstate New York’s 2XPresso by Southern Tier Brewing Co.  The latter is a milk stout with added espresso and lemon peels for true Italian style zip.  The result is a very black stout that’s creamy and rich that would be right at home along Rome’s Via Venato.
Coffee in your craft beer is part of the fun that brewers are stoutly going where no beer has gone before.

HERE'S WHERE THE BEANS COME FROM:

THE BREWSPAPER / MISSION BREWERY THEN AND NOW

SUDS CENTENNIAL--San Diego’s reputation as craft beer mecca gets a boost this month as the planet’s leading beer makers arrive to participate in the 2015 National Homebrewers Conference at the Town & Country Resort June 11-13.  Considered the one of the biggest competition in the world, this year’s American Homebrewers Assn. conference will attract more than 4,000 attendees.
“It’s fitting that the AHA conference is being held in San Diego, considering our county is recognized as the hottest growing micro brew in the world,” says Ryan Lamb, executive editor of West Coaster, a craft beer magazine, published in San Diego.

Historically, San Diego was home to several thriving breweries until Congress passed the 18th Amendment (aka Prohibition) closed them all in 1919.  Built in 1913, Mission Brewing brick building (pictured in 1915) became a quarantine hospital for victims of the world flu pandemic during Prohibition.  One hundred years ago, Mission Brewery was known for Old Mission Lager and Hopski, a soft-drink made from malt and hops, the jolt drink of its day.

Fast forward to 2007, when Dan Selis resurrected the Mission Brewing name and last year he moved into a new facility in what was once the Wonder Bread bakery.  Today, the popular brewery’s signature brews are a local Hefeweitzen, Amber Ale and a San Diego County IPA.  Mission’s beers have won their share of national beer competitions, which only add to the growing prestige of San Diego County as the hottest craft beer making zone in the world. 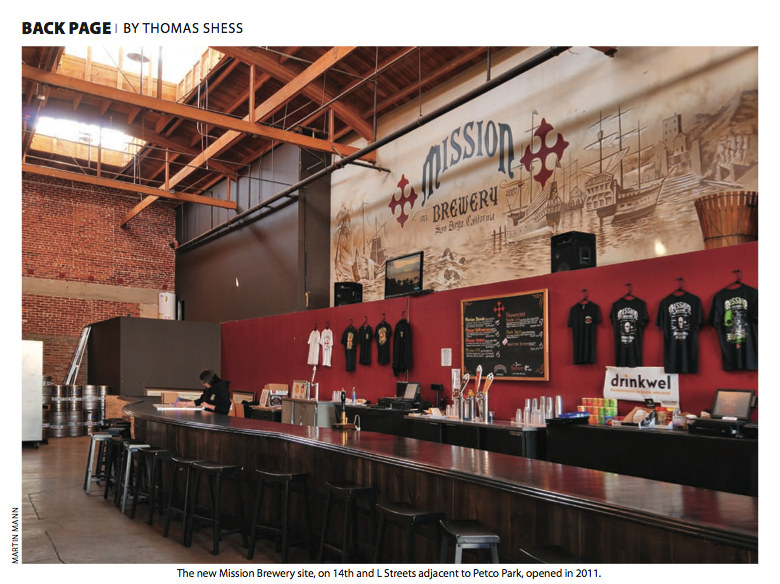