GUEST BLOG—By the Civil War Trust (www.civilwar.org)--After several unsuccessful engagements against Union Major General George G. Meade’s Army of the Potomac in early October, Confederate General Robert E. Lee’s Army of Northern Virginia retreated south of the Rappahannock River to maintain a defensive line against Federal troops. After burning the Orange & Alexandria railroad in his army’s retreat, Lee set up redoubts along the north bank of the Rappahannock River in late October. Lee had hoped his position on the Rappahannock would force Meade to divide his army should the Union general decide to attack. Though Meade divided his forces just as Lee anticipated, much of the subsequent action of the battle did not go as Lee had expected. 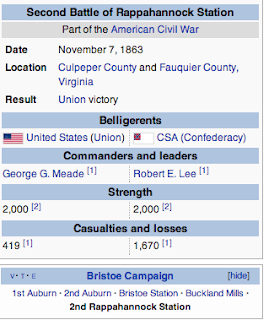 Godwin and Hays’ men found themselves in the midst of heavy and rapid enemy fire as Sedgwick worked his way around both rebel flanks and attacked Confederate redoubts. Sedgwick’s guns and Confederate batteries maintained an active fire until dusk. Lulled by the “lateness of the hour” and the quieting of gunfire, Confederates mistakenly believed that no further attacks would be attempted until the morning light.

Suddenly, out of the shadows of the night, Brigadier General David A. Russell’s division led a brutal bayonet assault on Rebel forces. Unprepared for such an attack, many Southerners simply ran off, but enough came together to fight the enemy in fierce hand-to-hand combat. Russell’s lead regiment, the 6th Maine, along with their reinforcements, the 5th Wisconsin, resisted the Louisiana Tigers’ counterattack. By the end of the fight, Russell’s men had overrun the Confederate bridgehead at Rappahannock Station and taken more than 1,600 of Early’s men prisoner.

South of the battle, winds stifled the sounds of the fight, leaving Confederate high command to find out only too late of the severity of the attack. Fear of further defeat and capture prevented their directing aid in repelling Federal troops near the station.

On both fronts—Kelly’s Ford and Rappahannock Station—Lee’s army suffered over 2,000 casualties. Thus miserably defeated, Lee retreated into Orange County south of the Rapidan River to take up another defensive position at Mine Run. 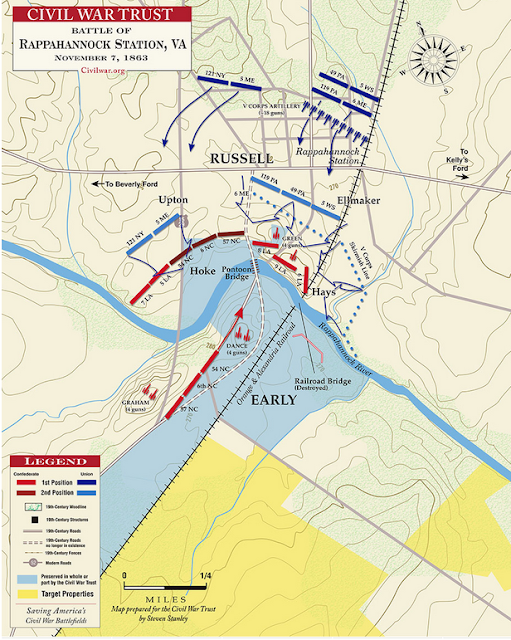 The Civil War Trust now has the opportunity to save 608 acres of endangered battlefield land at two significant November 1863 sites. Vital pieces of hallowed ground at Chattanooga and Rappahannock Station are threatened by development. But with your help, the Civil War Trust can forever preserve land that tells the story of one of the Civil War’s most decisive months.

http://www.civilwar.org/battlefields/chattanooga/chattanooga-2013/
If you donate more than $19 you will receive a 2014 Civil War Trust calendar.
Today, the town of Rappahannock Station has been renamed Remington.  Note: where the river bends there is a highway marker on the map #29 that is the location of the breastworks where the Union forces overran Gen. Early’s troops.