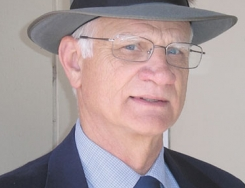 GUEST BLOG—By Tom Basinski--Five years ago in early March 2009, Dr. Steven Brozinsky, a fine fellow, informed me after my colonoscopy that I had a tumor on my colon that he knew was cancer. There’s a gut shot for you on an otherwise nice day.
Brozinsky didn’t waste any time setting me up with oncologist Dr. Marilyn Norton before any results were back.

When the results came in, I did have cancer.

Dr. Norton had already set me up for radiation and chemo at Sharp Hospital Chula Vista. The radiology staff there is another great group of caring professional people.
After the treatment several months later, the next scan showed the tumor to be gone.

But, not so fast with the celebration, Tommy Boy. Within months the tumor grew back and in 2010 I had surgery, complete with a permanent colostomy. Dr. Stephen Summers did a fine job.

Dr. Summers told me not to lift anything over 10 pounds or I’d get a hernia that he’d have to repair with another surgery. I believed I was scared enough to avoid heavy lifting, but try limiting yourself around the house to 10 pounds. I thought I avoided heavy stuff, but got a hernia that left me looking like I’m four months pregnant.
Dr. Norton kept on top of things and a subsequent scan in 2011 revealed the colon cancer had migrated to my lungs.

I did more chemo until that failed and the lung lesions began to grow again. I enrolled in a clinical trial at the UCSD Moores Cancer Center with a top-notch doctor, Tony Reid. After initial success, that trial failed after six months and I went back to more chemo.

Now, I receive chemo every two weeks that leaves me on my back with nausea and fatigue for five days. Then, I am OK for nine days until the next infusion.

A recent scan revealed a cancerous growth on my adrenal gland. Many people have applauded me for my great attitude and inspirational outlook. That’s incorrect. I have a bad attitude and I’m not an inspiration to anyone.

I’m very angry about what this sickness has done to my family. My wife of 41 years and I had nice plans for retirement and they didn’t include infusion, nausea, an ugly rash, fatigue and being trapped at home. My sons don’t deserve this mental strain either.

I never asked, “Why me?” I asked, “How could it be me?” I did everything right; eating tons of fruits and vegetables and limiting red meat. I exercised regularly and strenuously.

Well-meaning, yet uniformed people gave me tons of unsolicited advice. Among other things, they told me to eat broccoli and the cancer would go away. I always ate broccoli. If I ate any more broccoli I’d have a green afro.

I still work out regularly and as strenuously as an old-timer can at the South Bay Family YMCA. The equipment and staff there are great and the workout is a nice diversion.

I’m a man of faith, but I realize there are many people who believe religion is folly.

They are entitled to their opinion on this inexact, cloudy subject. I accept the prayers of others. I do not pray for myself. There are others much worse off than I that I pray for. If I am meant to be taken sooner rather than later, it’s out of my hands.

I will not complain nor feel sorry for myself. This is the hand I was dealt. I only wish my family didn’t have to endure the process. They don’t deserve it.

I guess five years is a pretty good run. It would be nice to have five more. Get your colonoscopies, folks. It’s why I’m here today.

Tom Basinski bio:
Tom Basinski is no shrinking violet. After studying to be a Catholic priest for five years while earning a B.A. in English Literature from St. Mary’s University in San Antonio, Texas, he traded his Roman collar for a badge and gun, patrolling and protecting the citizens of Chula Vista.

During his 17 years as a South Bay cop and 17 more years as an investigator for the District Attorney, Basinski wrote more than 125 true crime stories for the pulp magazines.  Eventually, when TV killed the pulp segment of publishing industry, he focused his writing talents on non-fiction books.

So far, he’s doing just fine as a writer.  In 2006, his first book, No Good Deed, (Berkley True Crime) has enjoyed commercial success. The story details a fiery murder in San Diego that took three years to solve and has many twists and turns, including the attempted contract murder of a defense attorney.
Currently, in bookstores nationally and on Amazon, his second book, The Cross Country Rapist is also available. It is the compelling story of a 1988 San Diego homicide that was not solved until 2005.

The book champions a tireless police investigation that ends in Daytona Beach, Florida and includes an exclusive prison interview with the convicted killer. Why does a future priest turn to law enforcement?  “It’s like writing true crime over literature.  I genuinely prefer bringing criminals to justice by grabbing them by the collar instead of wearing a collar.”