The Media Today: Why the White House banning a CNN reporter actually matters

From Columbia Journalism Review’s The Media Today report of July 25.

By Pete Vernon, Columnist, Columbia Journalism Review--CNN’s Kaitlan Collins did her job, and then got punished by the White House for it. The aggressive retaliation by government officials drew outrage from journalists, rival networks, and the White House Correspondents Association.

Collins, serving at the television pool reporter at an Oval Office photo opportunity on Wednesday, called out questions to President Trump about his former lawyer’s taping of conversations and Vladimir Putin’s failure to accept an invitation to Washington. This is common practice among White House reporters. Trump declined to answer the questions, which is his right. But then things took a turn, as Collins says she was called before Press Secretary Sarah Sanders and newly appointed deputy chief of staff Bill Shine and told that she would not be allowed to attend an open press event in the Rose Garden later in the day.

The response from fellow journalists was swift. New York Times chief White House correspondent Peter Baker called the decision “outrageous,” adding, “A strong leader does not fear questions. A strong democracy does not shield its leader from those who question authority.” Fox News anchor Bret Baier also stood up for his network’s rival, saying, “As a member of the White House press pool, Fox stands firmly with CNN on this issue of access.” Meanwhile, the White House Correspondents Association issued a statement strongly condemning the decision. “This type of action is inappropriate, wrong-headed, and weak,” wrote WHCA President Oliver Knox. “It cannot stand.” 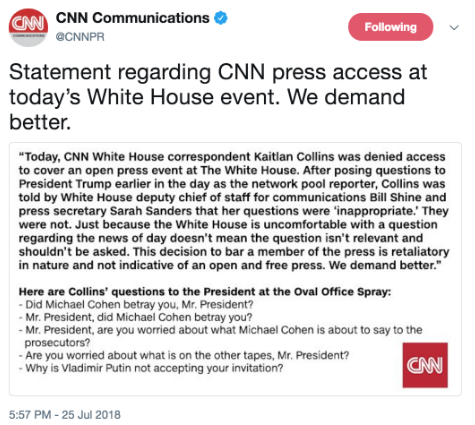 Apparently, the White House has decided that singling out CNN won’t hurt them. On President Trump’s recent European trip, he attacked CNN unprompted at a press conference in the UK, refused to answer a question from the network’s Jim Acosta, and pivoted to Fox News’s John Roberts, saying, “Let’s go to a real network.” The White House later pulled national security advisor John Bolton from a scheduled appearance on CNN as retaliation for what it said was “bad behavior.”

The full-throated response on Wednesday comes as solidarity among those covering the president has been on the rise. After receiving criticism for not backing Acosta at that UK press conference, Roberts issued a defense of the outlets that Trump had disparaged. Then, at a press briefing last week, Hill reporter Jordan Fabian yielded the floor to NBC’s Hallie Jackson when Sarah Sanders tried to brush past one of Jackson’s follow-up questions.

The outrage from journalists to Collin’s banning was palpable, but in order to have an impact they must also make it clear to the public why this story matters beyond the understandable anger and frustration from CNN. After all, the White House allowed CNN cameras and other network reporters to cover Trump’s afternoon event, so is this dust-up really all that important? The real reason why this is significant is that Trump’s constant attacks on the press—so regular that they barely register anymore—have now been backed by concrete action from his minions. As with any number of individual incidents involving this administration and the media, the specific action won’t hasten the end of the free press as we know it, but the sum of Trump’s deliberate attempts to undermine trust in journalism has long-lasting consequences.

Below, more on the reactions to the White House’s decision on Collins.
Support from the competition: Fox News President Jay Wallace issued a statement saying, “We stand in strong solidarity with CNN for the right to full access for our journalists as part of a free and unfettered press.” The support from Fox is especially notable not just because of its rivalry with CNN, but also because Shine was a longtime executive at the network until he was ousted last year over his handling of sexual harassment allegations.

But...: Fox Business Network host Lou Dobbs apparently didn’t get the message. “It's about time there were consequences for disrespectful behavior in the White House,” Dobbs said on his Wednesday program.

Play-by-play: CNN’s Brian Stelter has an overview of the entire incident, noting that “other reporters who were in the room said Collins was perfectly respectful” during her questioning of Trump.

“Inexcusable”: NBC’s Hallie Jackson responded to the White House’s action with a strong message. “Let's be clear: it is inexcusable, unacceptable, and sets an extremely dangerous precedent,” she wrote.” “We shout questions at the president regularly. It's called: doing our job.”

Changing the channel: White House events aren’t the only place that Trump wants to avoid CNN. The New York Times’s Katie Rogers and Maggie Haberman report that the president was furious that Melania Trump’s television aboard Air Force One was tuned to CNN on their recent foreign trip.