How did artists during the time of the Civil War and its aftermath remember and reflect upon the conflict in a time before film and radio—not to mention TV and the Internet? The answer: cycloramas. Cycloramas were unlike any other memorial to the Civil War at the time.  The massive panoramic paintings, usually 50 feet high and at least 400 feet in circumference, were hung in a 360 fashion that allowed visitors to seemingly step inside of a battle in progress.

Here, for the first time, the cyclorama is now available in the form of a 360-degree video. It doesn't replace a visit to the real thing, but it gets as close to the experience without making the trip. With some modern-day enhancements like battle sounds, smoke, and dirt flying about—along with a narration to guide you around the painting—we hope this video will entice you to visit the Cyclorama in Gettysburg National Military Park.  CLICK HERE.

THE ARTIST.
Paul Philippoteaux was born in Paris, the son of the French artist Henri Emmanuel Felix Philippoteaux. His education was at the Collège Henri-IV, the École des Beaux-Arts in Paris, and in the studio of his father, as well as the studios of Leon Cogniet, and Alexander Cabanal. 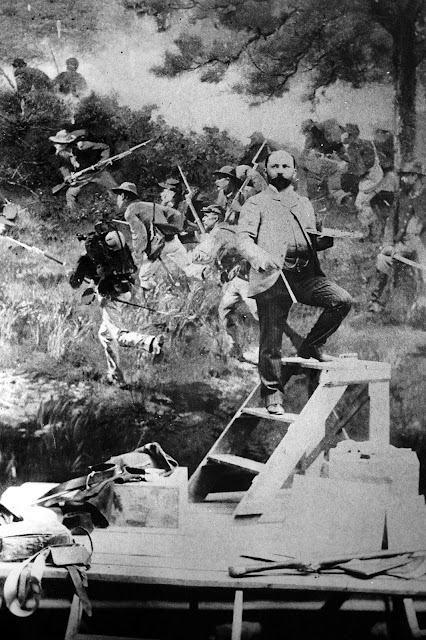 He became interested in cycloramas and in collaboration with his father created The Defence of the Fort d'Issy in 1871. Other works included Taking of Plevna (Turko-Russian War), the Passage of the Balkans, The Belgian Revolution of 1830, Attack in the Park, The Battle of Kars, The Battle of Tel-el-Kebir, and the Derniere Sortie.

He was commissioned by a group of Chicago investors in 1879 to create the Gettysburg cyclorama. He spent several weeks in April 1882 at the site of the Gettysburg Battlefield to sketch and photograph the scene, and he extensively researched the battle and its events over several months. Local photographer William H. Tipton created a series of panoramic photographs shot from a wooden tower erected along present-day Hancock Avenue. The photos, pasted together, formed the basis of the composition. Philippoteaux also interviewed several survivors of the battle, including Union generals Winfield S. Hancock, Abner Doubleday, Oliver O. Howard, and Alexander S. Webb, and based his work partly on their recollections.

Philippoteaux enlisted a team of five assistants, including his father, to create the final work.  It took over a year and a half to complete. The finished painting was nearly 100 yards long and weighed six tons. When completed for display, the full work included not just the painting, but numerous artifacts and sculptures, including stone walls, trees, and fences. The effect of the painting has been likened to the nineteenth century equivalent of an IMAX theater. It was the largest painting on canvas until at least 1964.