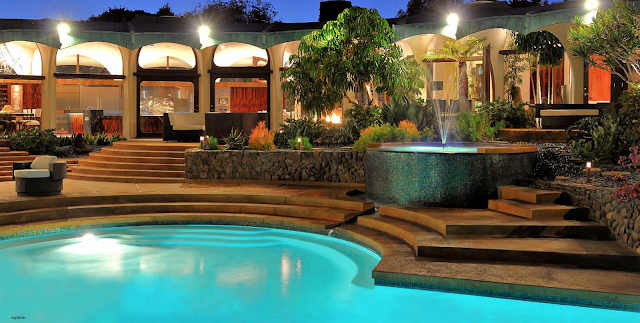 Ramin Pourtemayer, one of the youngest pilots ever to pilot a 747 passenger jumbo jet (for United Airlines), strongly believes in karma.  While more of a renaissance thinker than an adherent of dogmatic or factionalized thought, his humanism has served him well in his post-airline career as a real estate investor.

His do unto others as you would have them do unto you creed made him prosperous in body and soul.
“I’ve always set goals for myself day to day and long range,” said Ramin.  “When I was 15, I visited a home in La Jolla that so impressed me that I told my parents someday I will have a home like this. “

A career or two later, while in Australia on business he found on the Internet a San Diego home that interested him.  The listing had a description but no photos of the amenities, pool, famous architect, great La Jolla Farms location, tennis court and a nice sized lot.

From Australia he contacted a realtor and made a bid on the home before heading back to the U.S.

Upon his return, he made a first visit to the property that was now his for the taking before he signed the check.

“To my huge surprise that home was the same one that impressed me as a teenager.  I bought it on the spot. I’m its seventh owner.”

Called the Atoll House because the home’s crescent architectural footprint is a metaphor for a ring-shaped coral reef, there are visual similarities to a high end Polynesian resort because all rooms face outward to the a large swimming pool and richly landscaped courtyard.  In another light, there are rich elements of Persian and Moorish architecture.  One example is Atoll’s interior column treatment similar to that of La Mezquita, a mosque in Cordoba, Spain.  Kellogg’s use of lava rock on the Atoll House outdoors harkens to Hawaiian hillside homes. Frank Gehry’s irregular deconstruction style is seen in the roof line and the swoop of the entry, while the dreamscape creativity of Spain’s Antoni Gaudi pairs nicely with Kellogg’s eclecticism.

Yet comparisons to other styles or architect are moot.

Simply put there is no other home in San Diego quite like it.  The architect hand made this Atoll.  The vision is organic.  Kellogg wanted the home ease into the earth.  The Atoll house is pure Kellogg.

But, famous or not, the home is mortal. Built in the mid-1970s, this low-slung, and curvilinear home was in need of maintenance. Leaks and a weather-beaten exterior faced the new owner.

Ramin, who has remodeling experience as part of his real estate career teamed with his brother Sean Pourtemayer of SMP Construction, to fix and match the legendary property to his vision.

But before he commissioned a remodel he had to address the fact that any changes he’d make would fall under the watchful eyes of the local architectural community, whom many revered the original Kellogg design as world class.

To keep him within the bounds of an architecturally historic home, he hired long-time San Diego interior/architectural designer Fred Gemmell.  In 2008, the trio went to work.

Gemmell said, “To his credit, Ramin and Sean have done much of the design work themselves, I’ve added touches like adding 13,000 pounds of teal colored crushed glass as a rooftop.”  Gemmell’s roof completes the home’s ocean theme by creating a glistening roof that now mimics ocean hues around the reef.

All of the original tile and James Hubbell designed stained glass and chandeliers were untouched.  All of the cabinetry and flooring was replaced with exotic wood veneers.

Gemmell and Ramin agreed to take down a volcanic rock interior wall to give better flow to the circular interior.   “Mr. Kellogg liked the idea of us removing the wall,” says Ramin.  They also agreed to tone down a grainy plaster throughout with a smooth paint texture. The skylights were revamped by removing decaying wood and re-glassed. Kellogg sited the skylights to be able to view a shining star or planet at key times during the evening.

Also, all of Kellogg’s indoor and outdoor tiled stream theme’s were maintained or
enhanced.  A new outdoors kitchen was created using Lynx outdoor kitchen elements.  “If you go to the Lynx web page I had installed the outdoor kitchen they use for the webpage intro,” Ramin added.

All in all, the remodel is a seamless success.  Only scholars of Kellogg and Kellogg himself can for sure compare the architect’s stylistic DNA to that of the restorers.

Breathtaking in the evening, the Atoll House is the pride and joy
of a caring young man, who has already held countless charity events there.

The home is in good hands.

Defog Goggles
Before jumping into a pool—like the one shown above—coat the inside of swimming goggles with toothpaste, then wipe off—they’ll be crystal clear.
--Tip from GoodIdeasandTips.com