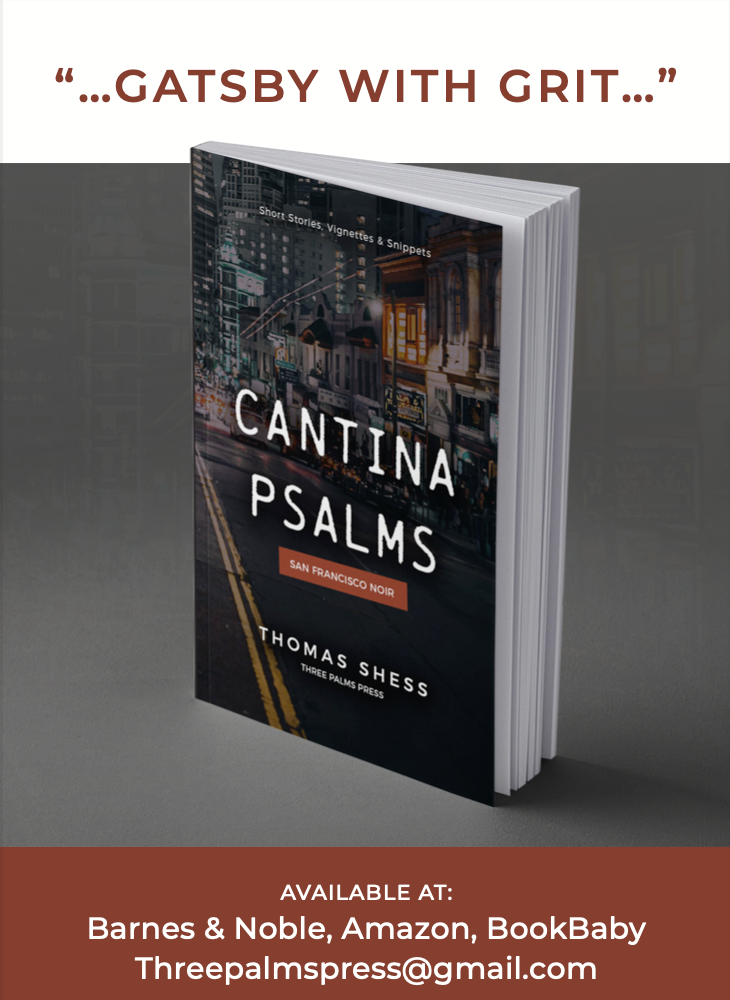 “We Can’t See Each Other Again.”

from Chapter 2: The Appearance of Impropriety.

Those framed windowpanes in his kitchen were the windshield of his airship. From there he could disappear into the clouds. Brilliant Van Gogh clouds swirling and twisting from billowing white to shades of gray to black full of more rain.

Across the street from Gresham’s second floor aerie, he noticed Washington Square Park was empty. At the far corner of the park near the bed and breakfast, he heard a French horn being played by someone hidden by the trees. Tom found the music soothing. It was something bittersweet by Duke Ellington, but he was no musician and the name of the tune escaped him. Nonetheless, it haunted him all day.

Gone was the priest who sat on the same bench day after day reading his newspaper. Absent were the Asian couple gently twisting, breathing, living, and practicing an ancient exercise.

A rush of cold air entered from the opened window bringing in the aromas he loved: garlic rising out of restaurant roof vents; coffee beans being roasted at Graffeo’s down the block; the smell of new rain, familiar streets and of the paved asphalt of Saints Peter & Paul’s school playground on Filbert Street.

Tom made enough toast and a pour-over dark espresso for two from the ground Graffeo beans and day-old sourdough baguette from Stella’s Bakery, which was just a block away.

He lathered his with blueberry jam he bought from Lee’s Grocery across Columbus Avenue, the Leon Lee owned store that was on the same block long building as Coit Liquor and Powell’s saloon. She insisted her toast be lightly buttered—real butter and she’d only accept a light spread of lingonberry jam processed in Malmo, Sweden.

Yawning, blinking her emerald-colored eyes, she had wrapped herself in the finest silk robe, his second most prized possession given to him by the maharajah of hyperbole.

She sipped on the coffee and ignored the toast. He had run out of her jam.

She refused to let him give her a morning kiss. “We can’t see each other ever again.”

“How can we do that? I work for your father. We see each other every day. You’ve heard him, he considers me family.”

“Don’t force me to say mean things. Why can’t you see the obvious? I can’t be in a relationship that I have to hide. I can’t have you in bed and Garrett out in public. It’s not fair to you or him.”

“Then choose,” he said. “I can handle your decision.”

“Doesn’t that make you mad?”

“I’ve enjoyed every minute with you. If it comes to an end—so be it,” he said, not fearing she would pack up and leave that moment.

“That’s my point,” she said, pushing her index finger into his shoulder.

Tom grabbed her hand. “The point is you don’t want to let the world know we are in a relationship—a serious one. What do you want me to do when you’re the one who is making the rules?”

“You’re right. I wish you had some other job.”

“See it to believe it.” Carly stared at a stack of papers on the dinette. Her curiosity overcame her. “Real estate papers?” she asked, raising her eyebrows. She picked up the top document. “Are you finally going to buy this unit?”

“I’m thinking about it.”

“What’s stopping you this time?”

“I always think about buying it when you announce you’re walking out on me.”

She rolled her eyes.

He added, “Then when you come back in the middle of the night, I remind myself that the place will be too small if we get married and have a kid.”

“Cheap shot, Gresham.” A tear rolled down her cheek. It was a sweet thought. But the reality was they would never marry, much less move into this flat—not when she lived on Russian Hill in a town- house that her parents turned over to her when Mr. and Mrs. Joseph Martin moved into the mayoral mansion out on the Westside.

“Buy it as an investment,” she offered. She placed the papers back on the stack. She looked pleased.

He decided to buy the flat. He’d show her the deed the next time she knocked on his door unannounced.  He asked, “Did you hear the music from the park?”

The know-it-all smiled: “Don’t get around much anymore.”

She was on other thoughts and didn’t answer him. 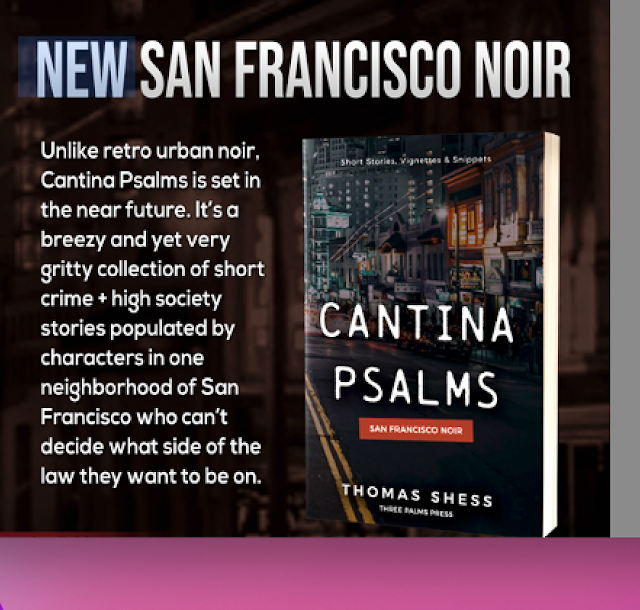 Above from San Francisco Review of Books

"Cantina Psalms is entertaining, amusing, deep, sometimes troubling and engrossing as it transports the reader through the City by the Bay today and tomorrow via a series of short stories. The author captures the good and dark sides of San Francisco with a cast of well-crafted characters."    --Patti Pietschmann Review in The New Novelist

From Goodreads reviewer: “…I consider Thomas Shess one of the best new novelists of our time.”

What Top Book Clubbers are Saying about CANTINA PSALMS:

Crazy & Original Journey.
“It’s been a while since I added a volume to my recommended reading…OK, so this one is very different from my normal fare. First, full disclosure, the author is a dear longtime friend of mine. But make no mistake, I don’t care if he was my brother or dad…if the reading wasn’t great, no way it finds its way onto my book club post.
“So…I don’t read fiction except on rare occasions. This being one because I already had such a respect for the author, I agreed. Gotta say, I was hooked from the preface. Not having a clue about subject matter except for the shocking (and funny) quotes by the “reviewers” I set on a crazy and original journey, into the near future (that had tones of the near past).
“One big bonus for me was that my world travels over the past many years enabled me to mentally place myself into many of the setting with photographic detail. “It felt like I was back in the 1980s at the height of prime time soaps where Dynasty and Dallas, met 007 Bond with a touch of today’s CrimeScene SVU.
Albeit I’m not a sex and some gore kinda guy, so the reading had just enough to create suspense and maybe cause a little blushing on my part since I realized it was my angelic friend writing those lines—either way, it captured my attention, imagination, and had me riveted to what would come next.
“So if you want to get lost in a little night time soap, don’t expect to be satisfied in the end, versus a JR Ewing cliffhanger. The best are always “wait till next season” and no difference here as I’m dutifully be waiting for 2023 and the renewal of The Psalms.”
--Review by Ken Pecus, a respected book club manager and world traveler when he’s not being the top real estate broker in the San Diego area.
***

A book you don't want to be over.

I thought I could spin through CANTINA PSALMS and read it in a week. In actuality, I spent days on just the Author's Note and Preface! Literally days. It's so clever, and the language is so sly, I just read it over and over. There seemed to be impish hidden meanings everywhere! As I get further and further into the chapters, I'm astonished at the author's mastery of metaphors. So many polished, humorous, and again, sly uses of language.

Many times, I just laugh out loud. The places he reminisces about become actual characters, along with the people you observe ... the cat and rabbit story is hilarious and wonderful. I keep going back to reread some of those magnificent metaphors ... patrons with faces dull as pencils ... a precinct captain with the face of a giraffe.

... Tom Shess makes his people and places adorable and warm and loving, and yes, gritty and often downright salty. It's clear Tom Shess loves his subject. I think I'm dawdling at reading it because I don't want to leave the places and people he's weaving into the fabric. A book you don't want to be over.