Editor’s Notes:  The 150th anniversary of the great civil war battle of Gettysburg will fall July 1-4, 2013.  But as in any great conflict, the prelude to the actual battle is as remarkable as the event itself.

Between now and July 4, 2013, this blog will reprint in several installments complete chapters from the biography of Robert E. Lee written by Douglas Southall Freeman and published by Charles Scribner’s Sons, New York and London, 1934.  Freeman’s work, which is now in the public domain, vividly recounts the days leading up to Gettysburg from a much earlier perspective.   Also, please note this blog added brackets to inform readers, what side the generals were on because we excerpted from Freeman’s text midway through this work.

The mistake mentioned in the headline above was made after the hotly contested cavalry battle at Brandy Station on June 9, 1863, where both sides fought to a standstill.  But in the aftermath of Brandy Station, rebel general J.E.B. Stuart asked and gained permission to leave the main thrust of Lee’s second invasion of the North and to go on a scouting trip behind enemy lines.
Because General Lee was ultimately responsible for “someone” in his command granting Stuart’s leave of absence, the rebel commander in chief would rue deeply (as Southall points out below) the lack of Stuart’s cavalry at the beginning of the Battle of Gettysburg, three weeks later.  But whose fault was it.  Ultimately it fell on Robert E. Lee.

At the beginning of May, 1863, the Army of Northern Virginia under the command of General Robert E. Lee had fought and won (at great cost to both sides) the Battle of Chancellorsville.  History points to that Rebel victory as the zenith of the Southern war effort.

Following his stunning victory at Chancellorsville, Lee decided to attempt a second invasion of the North. He felt such a move would disrupt the Union Army's plans for the summer campaign, would allow his army to live off the rich farms of Pennsylvania, and would aid in reducing pressure on the Confederate garrison at Vicksburg, MS.

On June 9, Union cavalry under Maj. Gen. Alfred Pleasanton surprised Maj. Gen. J.E.B. Stuart's Confederate cavalry corps near Brandy Station, VA. In the largest cavalry battle of the war, Pleasanton's men fought the Confederates to a standstill, showing that they were finally the equals of their Southern counterparts.

[Key point: In hindsight granting Stuart’s leave of absence was to be a major mistake by Lee and or his command]--As both armies advanced, Stuart was given permission to take his cavalry on a ride around the eastern flank of the Union army. This raid deprived Lee of his scouting forces through the first two days of the upcoming battle. On June 27, after an argument with Lincoln, Hooker was relieved and replaced by Maj. Gen. George G. Meade. A Pennsylvanian, Meade continued moving the army north to intercept Lee.

MORE ON THE BATTLE OF BRANDY STATION
If you go to the link below you'll find a Question and Answer session with the Civil War Trust and author Eric J. Wittenberg, which is very enlightening as to details of this lesser known yet key battle of the Civil War.  In this interview, readers will spot more facts on Southern bravado (holding a parade) and the Union finally getting its act together (better armaments for Northern Cavalry). 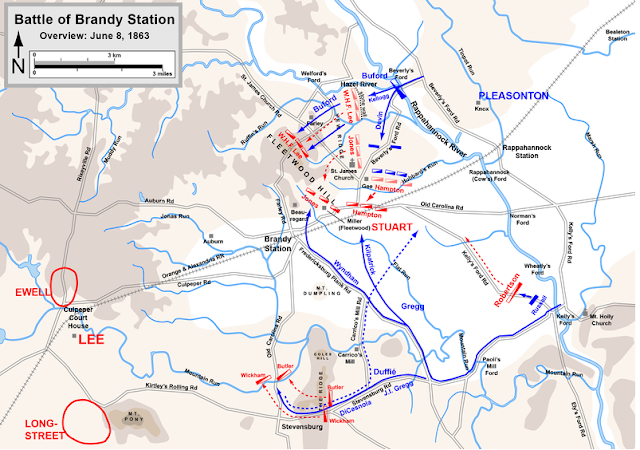