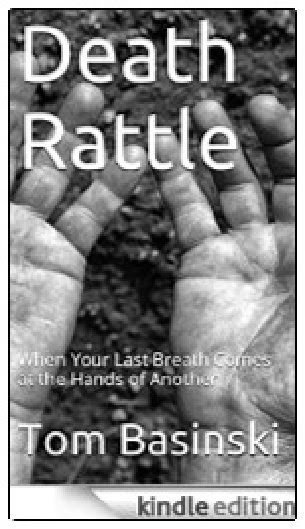 DETECTIVE FICTION--Flint, Michigan Police Homicide Sergeant Ed Ryback is back on the job after being fired by Chief of Police Demetrius Blaylock and reinstated by the Civil Service Commission. Ryback is removed from Homicide and assigned to the Motor Pool, a newly designated position meant to put Ryback "in his place." Women start turning up strangled and the prime suspect is Deputy Police Chief Rick Sorensen. The regular Homicide teams aren't making any progress so the Chief puts Ryback and his former partner, Sergeant Preston Love, recently relegated to Patrol, back on Temporary Active Duty in homicide to solve the murders. More murders take place and the list of suspects grows, even including the deputy chief's wife. Ryback and Love set a trap for the unknown killer. The result is a thrilling, action-packed conclusion that will leave the reader breathless.

One week I was Sergeant Ed Ryback, hotshot homicide detective in Flint, Michigan; handsome, athletic, smart, tough, daring, and creative. Even if you leave out the debatable descriptors, I was still one of the “go-to” cops when somebody went toes up the hard way.

That was one week. The next week I was fired. Gone! Poof! A memory. A few months of hell sped by and I was once again back on the department payroll, not in Homicide, but in charge of the Flint Police Motor Pool, a position created expressly for little ol’ steely-eyed, two-fisted, no-nonsense me.

My motor pool job descended on me after two separate things happened. First, the jury acquitted me in my second trial for the federal criminal charges of assault under the color of authority because I shot a robbery suspect when we arrested him.

The Civil Service Commission forced the Chief to reinstate me. When they returned my official cop status, Chief Demetrius Aloysius Blaylock envisioned a first-time need for a police sergeant to oversee the welfare of the department’s vehicles. Go figure.

The second thing that happened was the murder investigation. While putting together an appeal after the conviction for shooting the robber, and awaiting a possible prison sentence, I was beaten up twice, once by a band of thugs, and then by a guy who was stalking someone. I spent a night in jail, not something I would recommend.

My longtime girlfriend left me for a smooth-talking television reporter (who later dumped her, bless him). Also during this time my friends, except for one, abandoned me, and I happened to kill a guy.

The murder investigation was different than the usual kinds of killings cops do. You know which kinds I’m talking about: self-defense, a fleeing dangerous felon, or defense of someone in danger. No, my killing was of a different kind.

I think they call it a “cold-blooded execution,” or maybe an “assassination.” In spite of any self-serving rationalizing excuses I might have, this guy really needed killing. I never told that to the cops who interviewed me. I told them I didn’t know anything about the killing. I was arrested, but not booked.

They couldn’t make the murder charge stick. Even though I planned murder, I wasn’t a particularly good killer; just lucky. Did I tell you the guy needed killing? The woman he was stalking relied on the police and the criminal justice system for protection for two months. During that time the stalker:

1)      Sent her unwanted love letters, gifts, and lingerie. (Her own lingerie after he broke into her apartment.)
2)      Called her incessantly at work.
3)      Flattened her car tires.
4)      Beat and hospitalized her so severely she was almost unrecognizable.
5)      Burned down her newly purchased house.

The Flint police investigated me when my name surfaced as having been involved with the homicide victim/stalker. They lacked proof and couldn’t charge me.

Because my informant came forward and testified at my second trial, the jury acquitted me. The Civil Service Commission ordered the chief to reinstate me with back pay. The chief tempered his disappointment of being forced to put me back to work by inventing that do-nothing job in the Motor Pool.

I was now in charge of documenting police car gasoline usage and recording vehicle repair requests. I was now the “go-to” guy if your engine was knocking or your window wouldn’t roll down, or your brakes squeaked.

My ego cried out.

“Death Rattle” is the second novel by Tom Basinski that is available on Kindle.
Order by going to http://www.amazon.com/s?rh=n:133140011

Editor’s Note: Tom Basinski dropped out of a Texas seminary in his 20s and chose to be a policeman in Flint, Michigan.  He traded a priest’s collar for making collars on felons in a city that once was called the murder capital of North America.  That distinction has been passed on (is that pun?) to Juarez, Mexico.  Moving west Tom became a cop with the Chula Vista PD and then an investigator for the San Diego District Attorney. Over the years, he wrote true crime stories until all the true crime magazines in America went broke.  Undaunted, he turned to writing true crime books. Two of them were published by Berkley Books. You’ll find No Good Deed and Cross Country Evil on Amazon.com/books.  Order one or both and you’ll be in for a witty, yet tough work of crime journalism.

UPDATE:
It is with extreme sadness that I report that my friend, fellow writer, Tom Basinski died from cancer in February, 2015, a disease he battled since 2009.