Note: This book  was posted to the public domain by Feedbooks http://www.feedbooks.com. Strictly for personal use not for commercial purposes.

1.
When I was 27 years old, I was a mining broker's clerk in San Francisco, and an expert in all the details of stock traffic. I was alone in the world, and had nothing to depend upon but my wits and a clean reputation; but these were setting my feet in the road to eventual fortune, and I was content with the prospect.

My time was my own after the afternoon board, Saturdays, and I was accustomed to put it in on a little sailboat on the bay. One day I ventured too far, and was carried out to sea. Just at nightfall, when hope was about gone, I was picked up by a small brig which was bound for London.

It was a long and stormy voyage, and they made me work my passage without pay, as a common sailor. When I stepped ashore in London my clothes were ragged and shabby, and I had only a dollar in my pocket. This money fed and sheltered me for 24 hours. During the next 24 I went without food and shelter. 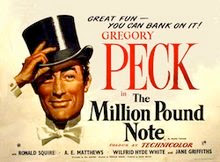 About ten o'clock on the following morning, seedy and hungry, I was dragging myself along Portland Place, when a child that was passing, towed by a nurse-maid, tossed a luscious big pear - minus one bite - into the gutter. I stopped, of course, and fastened my desiring eye on that muddy treasure. My mouth watered for it, my stomach craved it, my whole being begged for it.

But every time I made a move to get it some passing eye detected my purpose, and of course I straightened up then, and looked indifferent, and pretended that I hadn't been thinking about the pear at all. This same thing kept happening and happening, and I couldn't get the pear.  I was just getting desperate enough to brave all the shame, and to seize it, when a window behind me was raised, and a gentleman spoke out of it, saying: "Step in here, please."

I was admitted by a gorgeous flunkey, and shown into a sumptuous room where a couple of elderly gentlemen were sitting. They sent away the servant, and made me sit down. They had just finished their breakfast, and the sight of the remains of it almost overpowered me. I could hardly keep my wits to- gether in the presence of that food, but as I was not asked to sample it, I had to bear my trouble as best I could.

2.
Now, something had been happening there a little before, which I did not know anything about until a good many days afterwards, but I will tell you about it now. Those two old brothers had been having a pretty hot argument a couple of days be- fore, and had ended by agreeing to decide it by a bet, which is the English way of settling everything.

You will remember that the Bank of England once issued two notes of a million pounds each, to be used for a special purpose connected with some public transaction with a foreign country. For some reason or other only one of these had been used and canceled; the other still lay in the vaults of the Bank. Well, the brothers, chatting along, happened to get to wondering what might be the fate of a perfectly honest and intelligent stranger who should be turned adrift in London without a friend, and with no money but that million-pound bank-note, and no way to account for his being in possession of it. Brother A said he would starve to death; Brother B said he wouldn't. Brother A said he couldn't offer it at a bank or anywhere else, because he would be arrested on the spot.

So they went on disputing till Brother B said he would bet 20,000 pounds that the man would live 30 days, anyway, on that million, and keep out of jail, too. Brother A took him up. Brother B went down to the Bank and bought that note. Just like an Englishman, you see; pluck to the backbone. Then he dictated a letter, which one of his clerks wrote out in a beautiful round hand, and then the two brothers sat at the window a whole day watching for the right man to give it to.

They saw many honest faces go by that were not intelligent enough; many that were intelligent, but not honest enough; many that were both, but the possessors were not poor enough, or, if poor enough, were not strangers. There was always a defect, until I came along; but they agreed that I filled the bill all around; so they elected me unanimously, and there I was now waiting to know why I was called in. They began to ask me questions about myself, and pretty soon they had my story. Finally they told me I would answer their purpose. I said I was sincerely glad, and asked what it was.

Then one of them handed me an envelope, and said I would find the explanation inside. I was going to open it, but he said no; take it to my lodgings, and look it over carefully, and not be hasty or rash. I was puzzled, and wanted to discuss the matter a little further, but they didn't; so I took my leave, feeling hurt and insulted to be made the butt of what was apparently some kind of a practical joke, and yet obliged to put up with it, not being in circumstances to resent affronts from rich and strong folk.

3.
I would have picked up the pear now and eaten it before all the world, but it was gone; so I had lost that by this unlucky business, and the thought of it did not soften my feeling towards those men. As soon as I was out of sight of that house I opened my envelope, and saw that it contained money! My opinion of those people changed, I can tell you! I lost not a moment, but shoved note and money into my vest pocket, and broke for the nearest cheap eating house. Well, how I did eat! When at last I couldn't hold any more, I took out my money and unfolded it, took one glimpse and nearly fainted. Five millions of dollars! Why, it made my head swim.
I must have sat there stunned and blinking at the note as much as a minute before I came rightly to myself again. The first thing I noticed, then, was the landlord. His eye was on the note, and he was petrified. He was worshiping, with all his body and soul, but he looked as if he couldn't stir hand or foot. I took my cue in a moment, and did the only rational thing there was to do. I reached the note towards him, and said, carelessly: "Give me the change, please."

Then he was restored to his normal condition, and made a thousand apologies for not being able to break the bill, and I couldn't get him to touch it. He wanted to look at it, and keep on looking at it; he couldn't seem to get enough of it to quench the thirst of his eye, but he shrank from touching it as if it had been something too sacred for poor common clay to handle. I said:"I am sorry if it is an inconvenience, but I must insist. Please change it; I haven't anything else."

But he said that wasn't any matter; he was quite willing to let the trifle stand over till another time. I said I might not be in his neighborhood again for a good while; but he said it was of no consequence, he could wait, and, moreover, I could have anything I wanted, any time I chose, and let the account run as long as I pleased.

He said he hoped he wasn't afraid to trust as rich a gentleman as I was, merely because I was of a merry disposition, and chose to play larks on the public in the matter of dress. By this time another customer was entering, and the landlord hinted to me to put the monster out of sight; then he bowed me all the way to the door, and I started straight for that house and those brothers, to correct the mistake which had been made before the police should hunt me up, and help me do it.

I was pretty nervous; in fact, pretty badly frightened, though, of course, I was no way in fault; but I knew men well enough to know that when they find they've given a tramp a million-pound bill when they thought it was a one-pounder, they are in a frantic rage against him instead of quarreling with their own near-sightedness, as they ought. As I approached the house my excitement began to abate, for all was quiet there, which made me feel pretty sure the blunder was not discovered yet. I rang. The same servant appeared. I asked for those gentlemen.