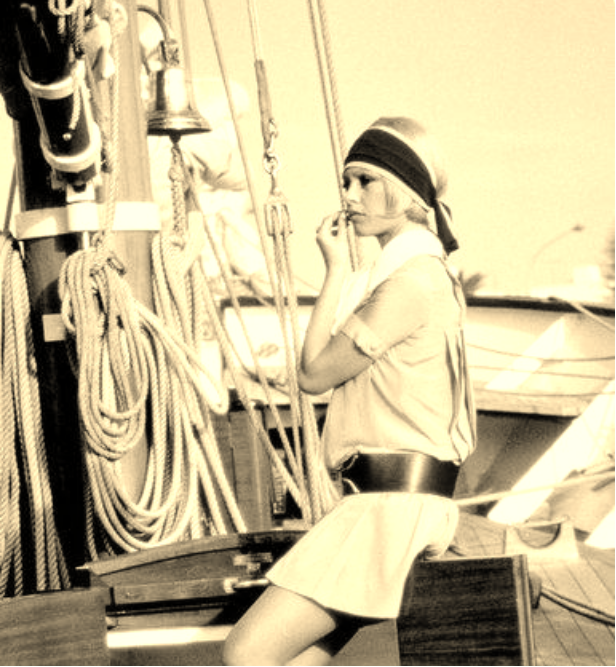 This unlikely story begins on a sea that was a blue dream, as colorful as blue-silk stockings, and beneath a sky as blue as the irises of children's eyes. From the western half of the sky the sun was shying little golden disks at the sea—if you gazed intently enough you could see them skip from wave tip to wave tip until they joined a broad collar of golden coin that was collecting half a mile out and would eventually be a dazzling sunset.

About half-way between the Florida shore and the golden collar a white steam-yacht, very young and graceful, was riding at anchor and under a blue-and-white awning aft a yellow-haired girl reclined in a wicker settee reading The Revolt of the Angels, by Anatole France.

She was about 19, slender and supple, with a spoiled alluring mouth and quick gray eyes full of a radiant curiosity. Her feet, stockingless, and adorned rather than clad in blue-satin slippers, which swung nonchalantly from her toes, were perched on the arm of a settee adjoining the one she occupied. And as she read she intermittently regaled herself by a faint application to her tongue of a half-lemon that she held in her hand. The other half, sucked dry, lay on the deck at her feet and rocked very gently to and fro at the almost imperceptible motion of the tide.

ABOUT THE AUTHOR:
The second half-lemon was well-nigh pulpless and the golden collar had grown astonishing in width, when suddenly the drowsy silence which enveloped the yacht was broken by the sound of heavy footsteps and an elderly man topped with orderly gray hair and clad in a white-flannel suit appeared at the head of the companionway. There he paused for a moment until his eyes became accustomed to the sun, and then seeing the girl under the awning he uttered a long even grunt of disapproval.

If he had intended thereby to obtain a rise of any sort he was doomed to disappointment. The girl calmly turned over two pages, turned back one, raised the lemon mechanically to tasting distance, and then very faintly but quite unmistakably yawned.

Ardita raised the lemon languidly, allowing three words to slip out before it reached her tongue.

Will you listen to me—or will I have to get a servant to hold you while I talk to you?"

"Put it in writing."

"Will you have the decency to close that abominable book and discard that damn lemon for two minutes?"

"Oh, can't you lemme alone for a second?"

"Ardita, I have just received a telephone message from the shore—"

"Telephone?" She showed for the first time a faint interest.

"Do you mean to say," she interrupted wonderingly, "'at they let you run a wire out here?"

"Won't other boats bump into it?"

"Well, I'll be darned! Gosh! Science is golden or something—isn't it?"

"Will you let me say what I started to?"

"Well it seems—well, I am up here—" He paused and swallowed several times distractedly. "Oh, yes. Young woman, Colonel Moreland has called up again to ask me to be sure to bring you in to dinner. His son Toby has come all the way from New York to meet you and he's invited several other young people. For the last time, will you—"

"No" said Ardita shortly, "I won't. I came along on this darn cruise with the one idea of going to Palm Beach, and you knew it, and I absolutely refuse to meet any darn old colonel or any darn young Toby or any darn old young people or to set foot in any other darn old town in this crazy state. So you either take me to Palm Beach or else shut up and go away."

"Very well. This is the last straw. In your infatuation for this Palm Beach man—a man who is notorious for his excesses, a man your father would not have allowed to so much as mention your name—you have reflected the demi-monde rather than the circles in which you have presumably grown up. From now on—"

"I know," interrupted Ardita ironically, "from now on you go your way and I go mine. I've heard that story before. You know I'd like nothing better."

"From now on," he announced grandiloquently, "you are no niece of mine. I—"

"O-o-o-oh!" The cry was wrung from Ardita with the agony of a lost soul. "Will you stop boring me! Will you go 'way! Will you jump overboard and drown! Do you want me to throw this book at you!"

Smack! The Revolt of the Angels sailed through the air, missed its target by the length of a short nose, and bumped cheerfully down the companionway.

The gray-haired man made an instinctive step backward and then two cautious steps forward. Ardita jumped to her five feet four and stared at him defiantly, her gray eyes blazing.

"Because I darn please!"

"You've made me that way! No child ever has a bad disposition unless it's her family's fault! Whatever I am, you did it."

Muttering something under his breath her uncle turned and, walking forward called in a loud voice for the launch. Then he returned to the awning, where Ardita had again seated herself and resumed her attention to the lemon.

"I am going ashore," he said slowly. "I will be out again at nine o'clock to-night. When I return we start back to New York, where I shall turn you over to your aunt for the rest of your natural, or rather unnatural, life." He paused and looked at her, and then all at once something in the utter childishness of her beauty seemed to puncture his anger like an inflated tire, and render him helpless, uncertain, utterly fatuous.

"Ardita," he said not unkindly, "I'm no fool. I've been round. I know men. And, child, confirmed libertines don't reform until they're tired—and then they're not themselves—they're husks of themselves." He looked at her as if expecting agreement, but receiving no sight or sound of it he continued. "Perhaps the man loves you—that's possible. He's loved many women and he'll love many more. Less than a month ago, one month, Ardita, he was involved in a notorious affair with that red-haired woman, Mimi Merril; promised to give her the diamond bracelet that the Czar of Russia gave his mother. You know—you read the papers."

"Thrilling scandals by an anxious uncle," yawned Ardita. "Have it filmed. Wicked clubman making eyes at virtuous flapper. Virtuous flapper conclusively vamped by his lurid past. Plans to meet him at Palm Beach. Foiled by anxious uncle."

"Will you tell me why the devil you want to marry him?"

"I'm sure I couldn't say," said Ardita shortly. "Maybe because he's the only man I know, good or bad, who has an imagination and the courage of his convictions. Maybe it's to get away from the young fools that spend their vacuous hours pursuing me around the country. But as for the famous Russian bracelet, you can set your mind at rest on that score. He's going to give it to me at Palm Beach—if you'll show a little intelligence."

"He hasn't seen her for six months," she said angrily. "Don't you suppose I have enough pride to see to that? Don't you know by this time that I can do any darn thing with any darn man I want to?"

She put her chin in the air like the statue of France Aroused, and then spoiled the pose somewhat by raising the lemon for action.

"Is it the Russian bracelet that fascinates you?"

"No, I'm merely trying to give you the sort of argument that would appeal to your intelligence. And I wish you'd go 'way," she said, her temper rising again. "You know I never change my mind. You've been boring me for three days until I'm about to go crazy. I won't go ashore! Won't! Do you hear? Won't!"

"Very well," he said, "and you won't go to Palm Beach either. Of all the selfish, spoiled, uncontrolled disagreeable, impossible girls I have——"

Splush! The half-lemon caught him in the neck. Simultaneously came a hail from over the side.

"The launch is ready, Mr. Farnam."

Too full of words and rage to speak, Mr. Farnam cast one utterly condemning glance at his niece and, turning, ran swiftly down the ladder.

For the full text: Wikisource.