SAVE THE DATE / SMITHSONIAN LECTURE ON CIVIL WAR MYTHS 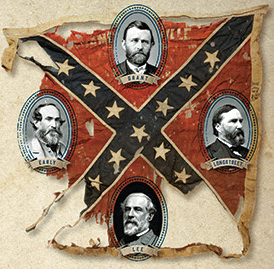 What has come to be known as the Myth of the Lost Cause has long shadowed historical views of the Civil War, the country’s 19th century watershed event. The persistence of that narrative, created by leaders of the devastated South as an attempt to justify the just-concluded conflict, still affects contemporary America.

For example, when controversies over the appropriateness of displaying the Confederate flag erupted a few years ago, many supporters claimed that it was a symbol of their regional heritage as well as states’ rights—not of the era of slavery.

The Smithsonian Institution via its Smithsonian Associates has organized and scheduled an all day lecture examining the Myth of the Lost Cause: How Civil War History Was Rewritten.  The event is set for the Smithsonian’s Location Dillon Ripley Center, 1100 Jefferson Dr. SW, Washington DC.  Metro: Smithsonian (Mall exit).  Tickets are $90 for Smithsonian members and $140 for non-members.

Civil War historian Ed Bonekemper examines the components of the myth, how it was created by ex-Confederates, and how it has affected our perception of the Confederacy, slavery, states' rights, the nature of the Civil War, and the military performances of Robert E. Lee, Ulysses S. Grant, William T. Sherman, and James Longstreet.

***
Definition of Lost Cause:
https://en.wikipedia.org/wiki/Lost_Cause_of_the_Confederacy
***

Program Topics and Times:
9:30–10:45 a.m.
Slavery’s Insidious Nature and Bright Future in 1860
The myth portrays slavery as a benevolent institution that benefited whites and blacks alike, one that allowed blacks to achieve their maximum potential. It also contends that slavery was about to disappear of its own volition, rendering the Civil War unnecessary.  Bonekemper challenges these contentions and explores slavery’s economic worth, impact on slave families, and future prospects in 1860.

11 a.m.–12:15 p.m.
The Driving Force of Secession
According to the myth, secession occurred and the Confederacy was formed in order to protect states’ rights—not to protect slavery. Bonekemper challenges this by analyzing demographics, secession resolutions, the Confederate Constitution, seceding states’ outreach to other slave states, Confederate leaders’ pronouncements, crisis settlement efforts, and other indicators to show that secession and the Confederacy were intended to preserve slavery, not states’ rights.

1:30–2:45 p.m.
Confederate Military Advantages and Lee’s Fatal Flaws
The myth contends that the Confederacy had no chance to win, did the best it could, and that its leader Robert E. Lee, was one of the greatest generals in history. It also claims James Longstreet, not Lee, lost Gettysburg. Bonekemper examines the military advantages of the Confederacy and Lee’s fatal propensity for attacking recklessly in the East, while shunning the Western theater. An overview of Lee’s battles, campaigns, successes, failures, and legacy, demonstrates how Lee, not Longstreet, lost Gettysburg.

3–4:15 p.m.  Grant and Sherman’s Hard War
The myth asserts that Ulysses S. Grant was a butcher who won only by brute force and that the North won only by waging “total war.” An examination of Grant’s battles, campaigns, successes, failures, and legacy reveals his greatness. Lecturer Bonekemper also examines how William T. Sherman and Phil Sheridan waged “hard war,” not total war, to achieve victory.

ABOUT THE AUTHOR:
Bonekemper is the author of five books on the Civil War, book review editor of the Civil War Times, and a former adjunct lecturer in military history at Muhlenberg College.