ALONG THE PATH OF TOTALITY

GUEST BLOG / By Samantha Mathewson, Space.com contributing writer--With the Aug. 21 total solar eclipse finally here, astronomers have revealed what the sun's outer atmosphere is likely to look like as the sun disappears behind the moon.

The rare eclipse will sweep across the continental U.S. from Oregon to South Carolina along a stretch of land about 70 miles (113 kilometers) wide. Skywatchers within this path will experience totality, when the moon appears to move directly in front of the solar disk and casts a long shadow on Earth. Viewers outside of the path of totality will still experience a partial solar eclipse. 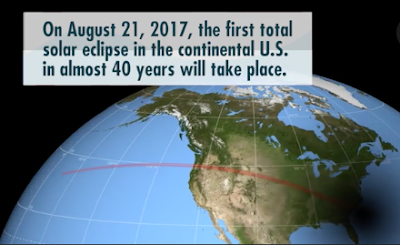 During a total solar eclipse, skywatchers have the opportunity to see the sun's glowing outer atmosphere, known as the corona. The jets and streamers present in the corona become visible because the moon blots out much of the bright light of the sun's disk, which typically overwhelms the light from the corona.

The corona is more than a glowing halo of light. It is incredibly hot — it can reach temperatures of 3.5 million degrees Kelvin (3.49 million degrees Celsius or 6.29 million degrees Fahrenheit) — and has an intricate structure created by the sun's magnetic-field lines.

Using measurements from the National Solar Observatory Integrated Synoptic Program (NSO/NISP), astronomers were able to model the shape of the solar coronal magnetic field as of July 25, which represents one solar rotation, or 27.2753 Earth days, before the Aug. 21 total solar eclipse.

Here's what was predicted a month ago: "Since we are exactly one solar rotation away from the solar eclipse, we're able to use today's observations to predict the structure of the corona on Aug. 21st," Gordon Petrie, an astronomer from the NSO, said in a statement in early August. "The corona is not likely to change too much between now and the eclipse, unless we get lucky and a large active region appears!"

"We expect to see faint, straight structures protruding from the north and south poles of the sun — these are the polar plumes," Petrie added. "We will be able to see brighter bulbs of material closer to the equator — these are called helmet streamers."

Electric currents inside the sun generate a magnetic field that changes over time, depending on where the sun is in its 11-year activity cycle. Astronomers are able to trace the magnetic fields of the corona by observing the superheated gases present in the sun's atmosphere. Astronomers compare this technique to "the middle-school experiment where you sprinkle iron filings over a bar magnet to get a butterfly shape," according to the statement.

"The corona changes its shape over time, and looks drastically different during solar maximum compared to solar minimum," David Boboltz, the National Science Foundation's program officer for the NSO, said in the statement. "During solar maximum, such as the 2012 eclipse, the corona looks like a spiky ring around the entire sun. In contrast, a solar minimum eclipse such as the one this month, will have lots of complexity near the equator but will be drastically different near the north and south poles of the sun."

While skywatchers in the path of totality will experience no more than 2 minutes and 40 seconds of darkness in any one location, scientists will be able to combine observations taken of the sun's corona over the course of 90 minutes — the time it takes the moon's dark shadow to travel from the West Coast to the East Coast. This will allow astronomers to further study the corona and its structure.

What's more, the NSO is also helping to build the Daniel K. Inouye Solar Telescope (DKIST) on the Hawaiian island of Maui, which will allow scientists to measure the magnetic fields in the solar corona directly for the first time, according to the statement.

"The solar corona is largely an enigma," Valentin Pillet, director of the NSO, said in the statement. "For now, the best we can do is compare high resolution images of the solar corona, such as those we'll obtain during the eclipse, to our theoretical models. But DKIST will allow us to actually measure the magnetic fields in the corona. This will be revolutionary in the field of solar physics."

AUTHOR BIO
Samantha Mathewson joined Space.com as an intern in the summer of 2016. She received a B.A. in Journalism and Environmental Science at the University of New Haven, in Connecticut. Previously, her work has been published in Nature World News. When not writing or reading about science, Samantha enjoys traveling to new places and taking photos! You can follow her on Twitter @Sam_Ashley13.