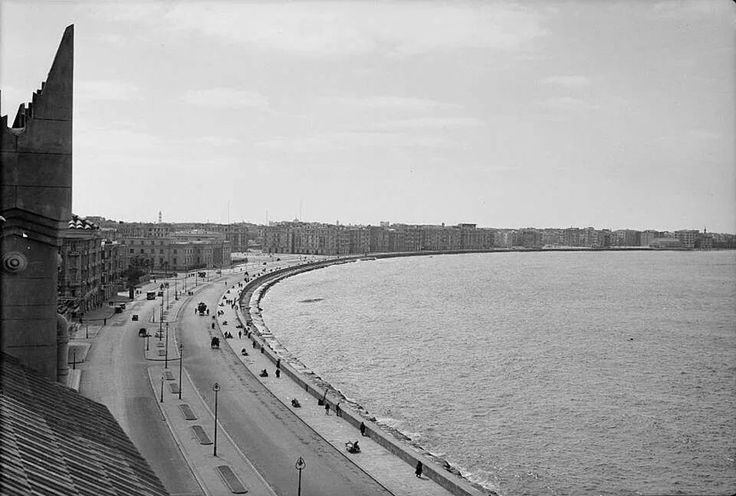 [1]. numbered captions at end of blog
Introduction by Thomas Shess, PillartoPost.org--I’ve not been to Alexandria, the ancient City in Egypt that in old photographs looks like Havana, an old city on its own, but in comparison Havana is only 500 years old, a mere child compared to Alexandria, where Cleopatra lay to issue with Julius Caesar and Marc Antony.   Until, I visit Alexandra, home once to the world’s largest library, a place that has been called the closest great Asian city to the West, I will avail myself to the words of Lawrence Durrell and old images anonymously posted on the Internet.  And, remark how similar they look in regards to their serpentine malecons. 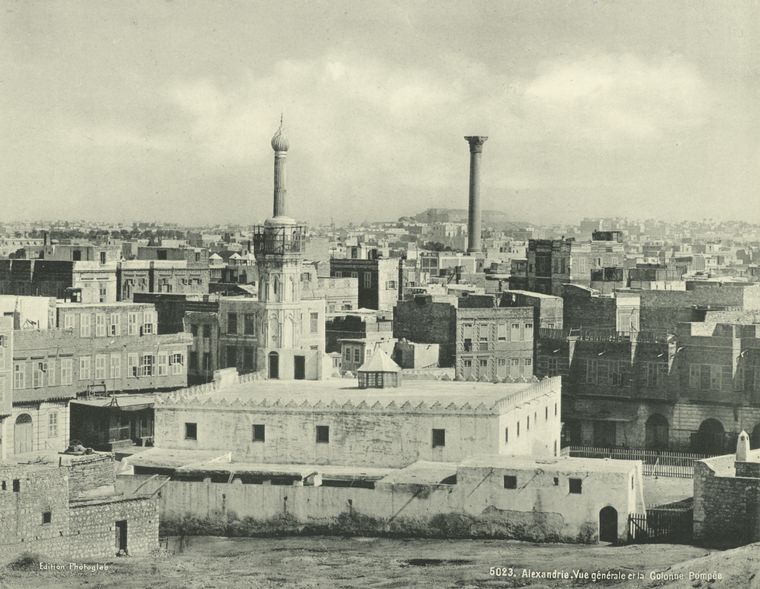 [2].
ALEXANDRIA: From Justine by Lawrence Durrell.
“...Capitally, what is this city of ours?  What is resumed in the word of Alexandria?  In a flash my mind’s eye shows me a thousand dust-tormented streets.  Flies and beggars own it today—and those who enjoy an intermediate existence between either.
Five races, five languages, a dozen creeds: five fleets turning through their greasy reflections behind the harbor bar.  But there are more than five sexes and only demotic Greek seems to distinguish among them.  The sexual provender which lies to hand is staggering in its variety and profusion.  You would never mistake it for a happy place.  They symbolic lovers of the free Helenic world are replaced here by something different, something subtly androgynous, inverted upon itself.  The Orient cannot rejoice in the sweet anarchy of the body—for it has outstripped the body.   I remember Nessim once saying—I think he was quoting---that Alexandria was the great winepress of love; those who emerged from it were the sick men, the solitaries, the prophets—I mean all those who have been deeply wounded in their sex.
*** 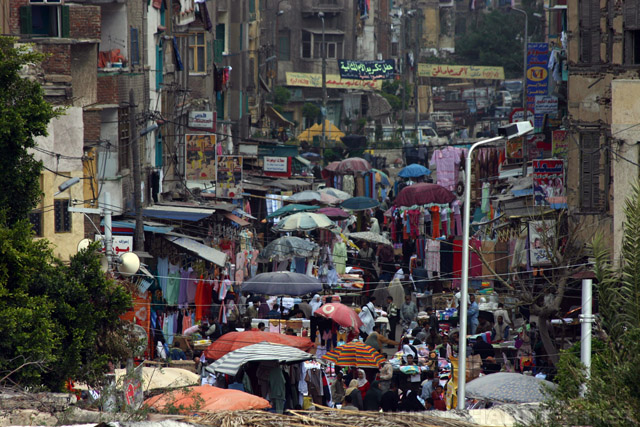 [3].
Notes for landscape-tones...Long sequences of tempera.  Light filtered through the essence of lemons.  An air full of brick-dust—sweet smelling brick dust and the odour of hot pavements slaked with water.  Light damp clouds, earth-bound, yet seldom bringing rain.  Upon this squirt dust-red, dust-green, chalk mauve and watered crimson lake.  In summer the sea damp lightly varnished the air.  Everything lay under a coat of gum.
And then in autumn the dry, palpitant air, harsh with static electricity, inflaming the body through its light clothing.  The flesh coming alive, trying bars of its prison.  A drunken whore walks in a dark street at night, shedding snatches of song like pedals.  Was it in this that Antony heard the heart numbing strains of the great music which persuaded him to surrender forever to the city he loved?
The sulking bodies of the young begin to hunt for a fellow nakedness, and in those little cafes where Balthazar went so often with the old poet of the city, the boys stir uneasily at their backgammon under the petrol lamps; disturbed by this dry desert wind—so unromantic, so unconfiding—stir, and turn to watch every stranger.   They struggle for breath and in every summer kiss they can detect the taste of quicklime.
***
[4.] 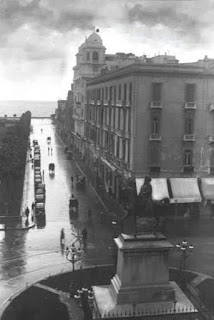 In the great quietness of these winter evenings there is one clock: the sea.  Its dim momentum in the mind is the fugue upon which this writing is made.  Empty cadences of seawater, licking its own wounds, sulking along the mouths of the delta, boiling upon those deserted beaches—empty, forever empty under the gulls: white scribble on the grey, munched by clouds.   If there are ever sails here they die before the land shadows them.  Wreckage washed up on the pediments of islands, the last crust, eroded by the weather, stuck in the blue maw of water...gone!

Now tired men throw back the shutters of their balconies and step blinking into the pale hot light—etiolated flowers of afternoons spent in anguish, tossing upon ugly beds, bandaged by dreams.   I have become one of these poor clerks of the conscience, a citizen of Alexandria...”
[5]. 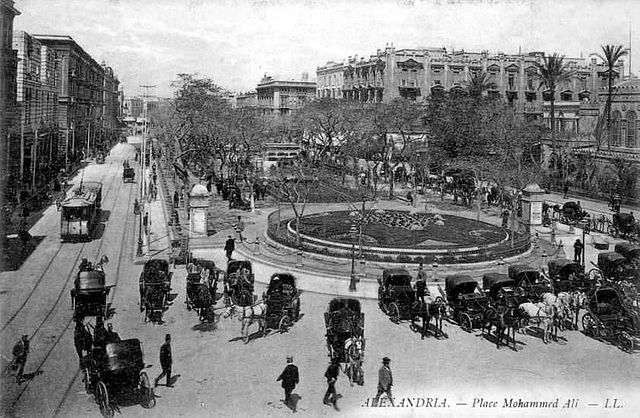 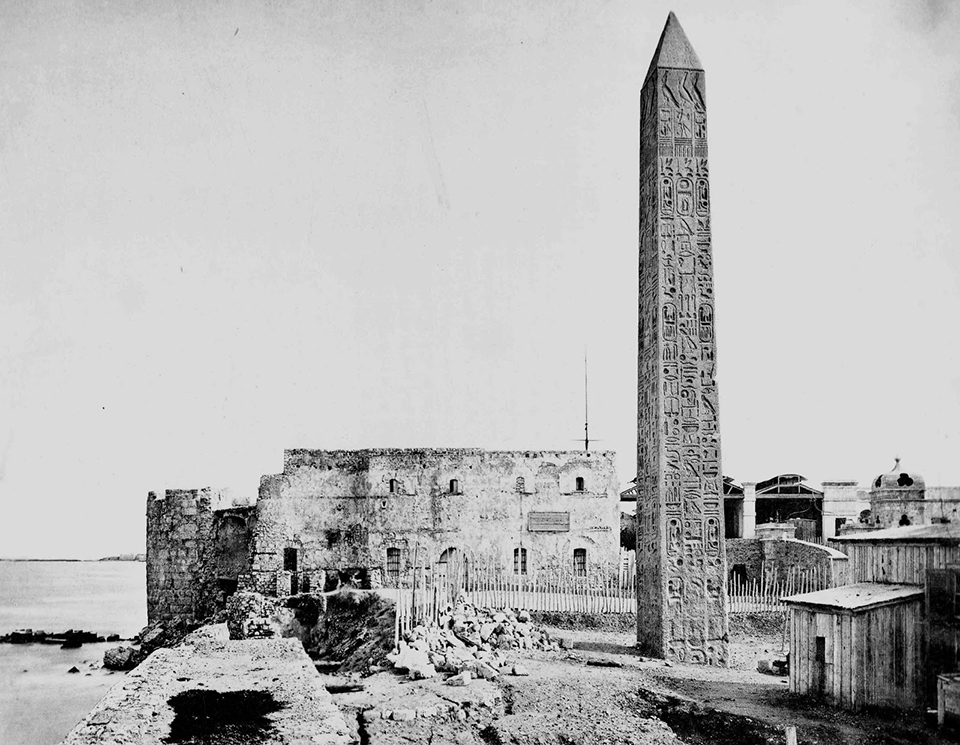 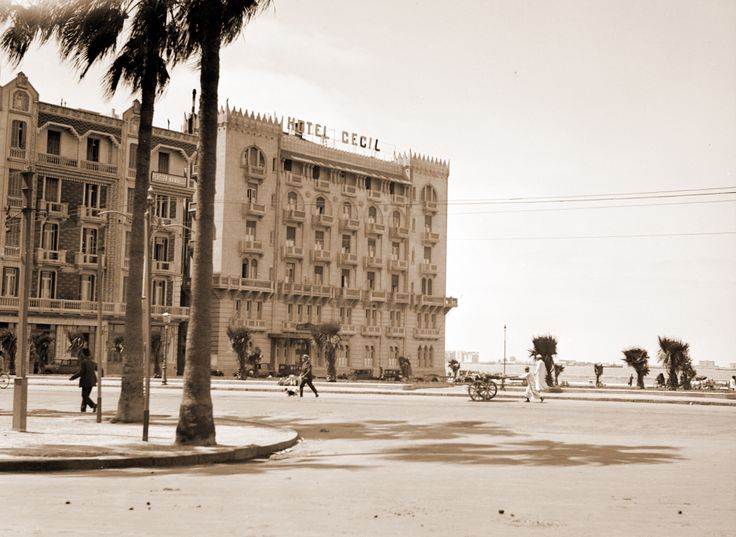 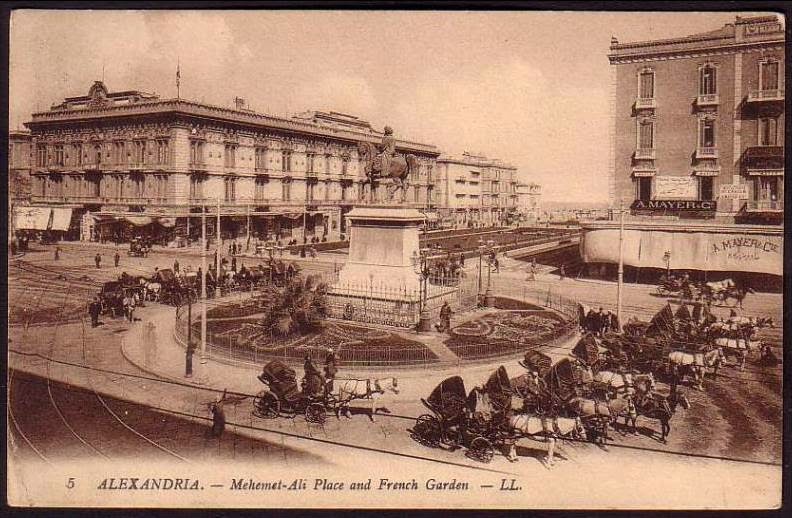 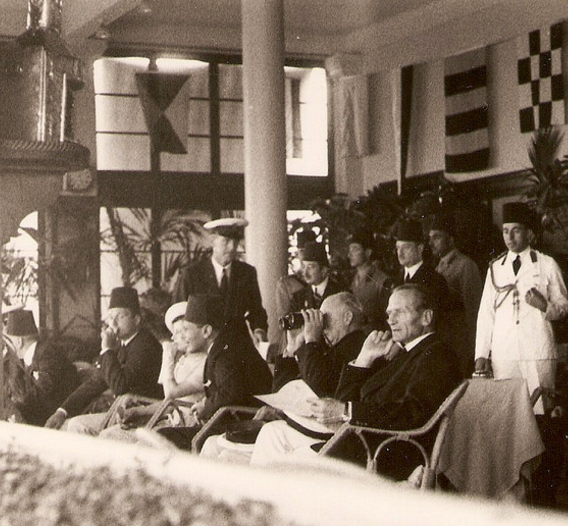 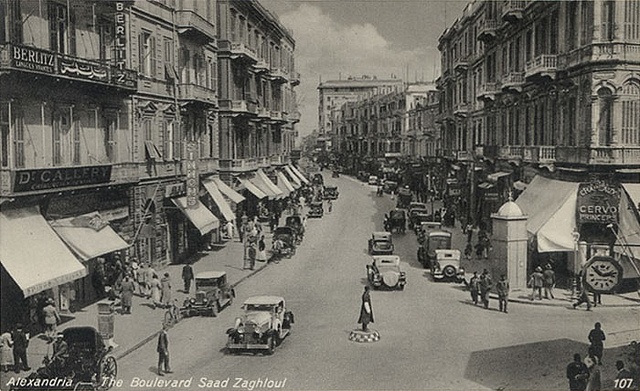 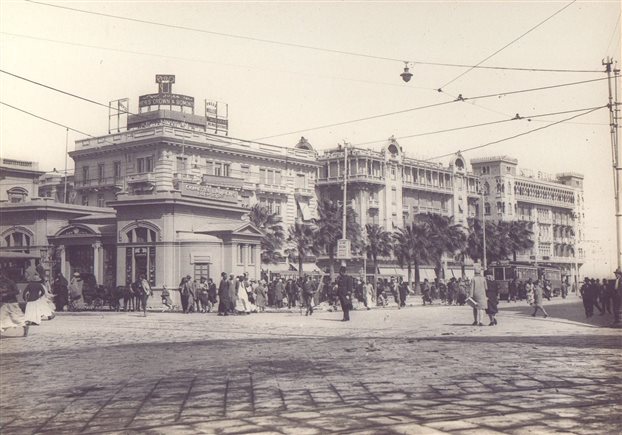 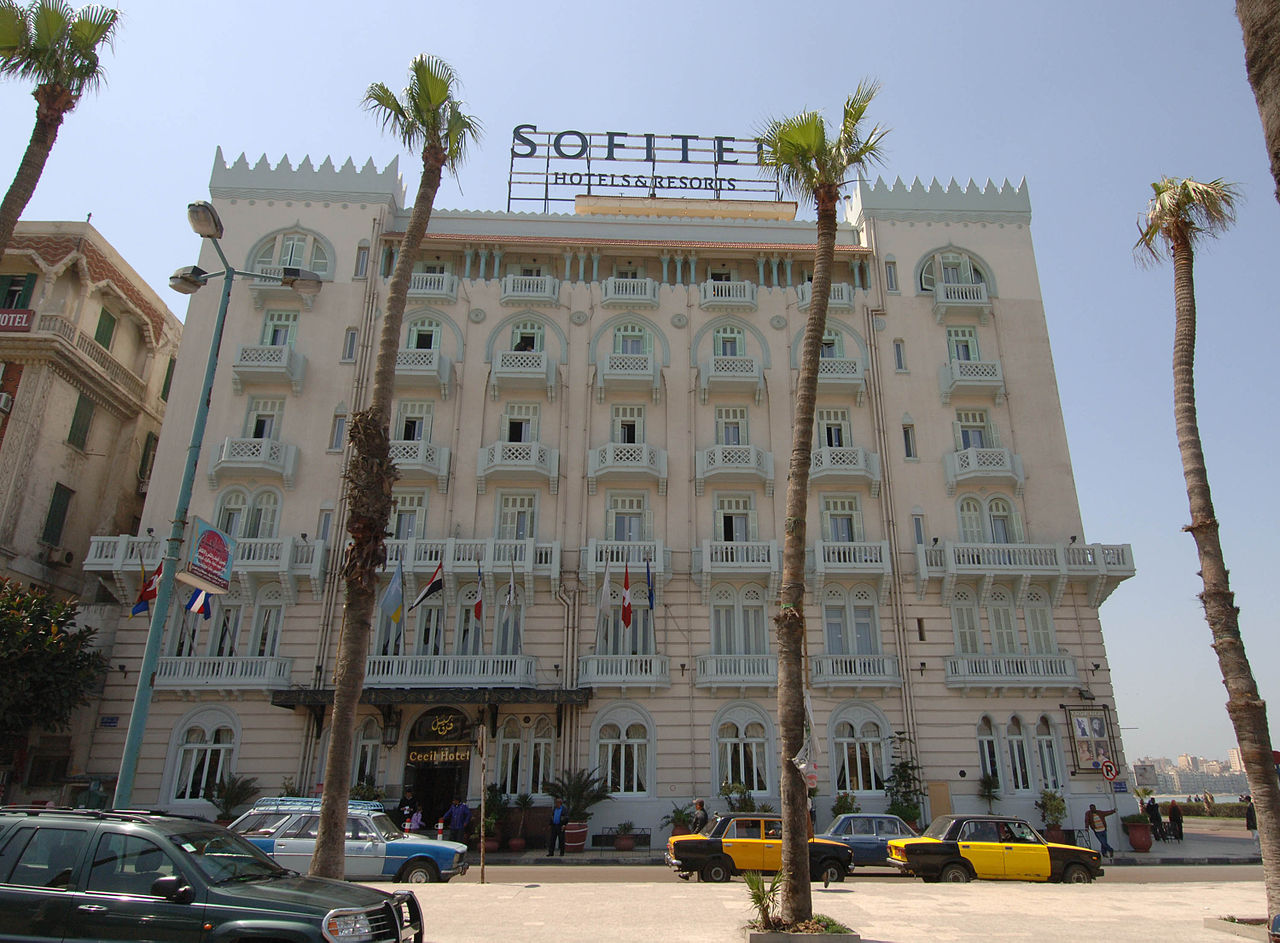 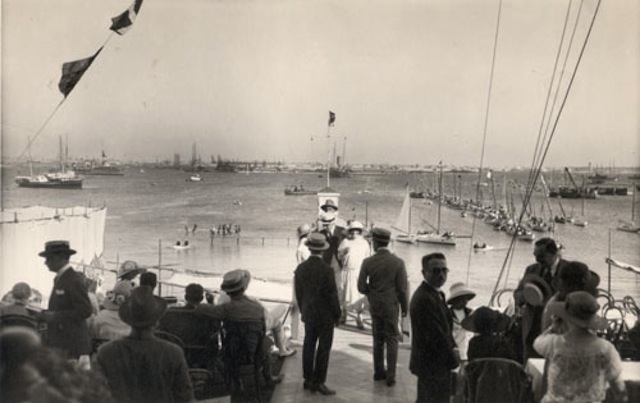 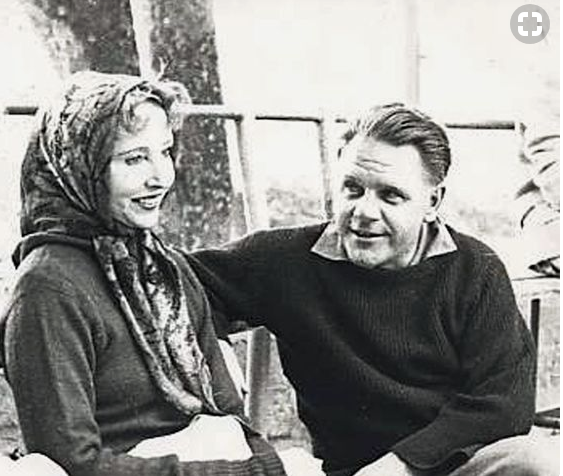 [2.] Vintage view of the old city and Pompey's pillar, a Roman triumphal column in Alexandria and the largest of its type constructed outside the imperial capitals of Rome and Constantinople.

[4.]  Vintage image of a rainy day in Alexandria looking out to the Mediterranean from Muhammad Ali Place.

[7.].Cleopatra’s Needle—Image is from the 1880s before the obelisk was shipped to Central Park in New York City, where it resides to this day.  The Needle site is now the Cecil Hotel, built in 1929.

[8.] Hotel Cecil, Circa 1940s.  By the 1950s author Lawrence Durrell wrote about the hotel in his series of four novels called the Alexandria Quartet.

[9.]  Earlier Belle Epoch image of Muhammad Ali Place and the French Garden in the distrance.

[13]. Hotel Cecil is now under management by the Sofitel Hotels chain.

[15.] Authors Anais Nin and Lawrence Durrell, circa 1940.  Nin, Durrell and Henry Miller called themselves the three musketeers.  A riveting account of the friendships between this trio of authors is found on Anais Nin blog. Click here.