A BRIDGE SO FAR 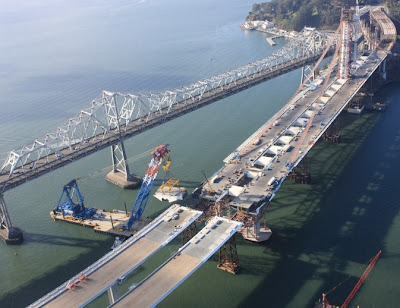 RAINY DAY MUSINGS—Seeing the pictured Cal Trans image of the progress being made on the $7 billion and counting SF Bay Bridge rebuild, reminded me that for five years I made a workaday commute across the original span. No picnic. Memories, unlike rush hour, flood back faster than bumper-to-bumper traffic. Then, I was editor of San Francisco Magazine, a failing city magazine that I was hired to infuse much higher circulation numbers on to its books so the owner could resell it—pronto.

My first week on the job, columnists from the dailies skewered me for being a Southern Cal guy taking over a "don't ever call it Frisco" magazine. Odd of them, I thought because the columnists came from New York and Chico, CA respectively.

A couple of PR events later, I later met one of the columnists and remarked why the dig?
“Kid, I gotta fill space—nothing personal,” came his reply over a cocktail glass.

I never did mention I was living on the Oakland side of the Bay while
editing SF Mag. Great city. Tough crowd.