ARCHIVE / WE'RE OFF TO GETTYSBURG 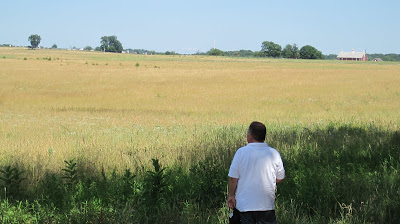 BLOG ROAD TRIP— Today this blog is going on its first week-long road trip visiting Gettysburg, the town and its great battlefields as a salute to our country’s ongoing 150th anniversary remembrance of the War Between the States. These upcoming Gettysburg-themed essays are intended—in a small way—to encourage historical tourism to Gettysburg and to rekindle the discussion of an amazing transitional (albeit bloody) time in our history.

Mid-way through that war, the Battle of Gettysburg was fought. Both sides—Confederate and Union-pushed all their chips to the pot. Both sides had to win. By suffering 51,000 casualties that battle (Fri. thru Sun, July 1-3) became the greatest poker game in U.S. military history. No three-day weekend has ever been so bloody.

From a historic standpoint the outcome at Gettysburg during 1863 steeled our nation into becoming a leading military power in the world based on manpower and advanced technology. More importantly it ended human slavery and put to rest the notion that our country can be divided.

Also, by re-examining Gettysburg as a social phenomena, we can be reminded that the rancor that divided us 150 years ago needs to be re-addressed because blue vs. gray of 1863 seems a lot like blue vs. red of 2012.

Tomorrow: Greatest Poker Game: The Stakes. This quick essay acts as a backgrounder to your trip to Gettysburg. It encapsulates why Gettysburg happened in the first place.

Tuesday: Where to Stay. Add historic lodging to the experience.

Photo by Phyllis Shess: Blog author sharing a moment at the Confederate side, where on July 3, 1863, 12,000 Rebels, the pride of the Army of Northern Virginia led, in part by General George Pickett, charged from that spot toward the Union lines, a mile away across the meadow.

The companion image shows where the Union troops led by General George G. Meade waited for the Confederate attack, which included the fated Pickett’s Charge.