GETTYSBURG: WHY WE CARE 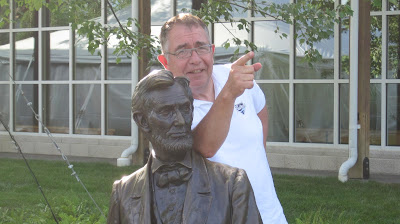 TOUCHING HISTORY—Recent interest in the U.S. Civil War has been fueled by local and national events of remembrance, which began in April as our nation marked the 150th anniversary of the first shot of that bitter war. Also sparking attention will be media articles over the next three years spotlighting the retrospective. Yesterday, for example, the San Diego Union-Tribune published a large syndicated travel page article on the do’s and don’ts of visiting historical sites like Gettysburg.

Today’s post--longer than usual--for a blog will be typical of Pillar to Post’s historic travel guidelines. How to get there and where to stay will be touched upon, but also important are discussions on why Gettysburg became such a watershed event in the history of our nation.

Generally speaking, the significance of the Civil War (1861-65) was that it resolved at that time the debate whether states rights overruled national rights. The war ended the open rebellion of seceding states, which were willing to fight to the death because they were threatened by the loss of political control to maintain their ways of life. The rebels had resorted to violence (war) because they no longer could accept compromise.

By mid-point in the war, January 1, 1863, President Abraham Lincoln had been pushed to the wall. The war was at a stalemate because the Union Army was in the midst of “on-the-job” training. Up until New Year’s Day 1863, Lincoln did not have an overwhelming mandate in the North to free the slaves. At that point, even Lincoln believed he had slim chances of winning a second term.

Faced with so much “friendly” fire he boldly issued the Emancipation Proclamation thus forever ending slavery in this nation. If he wasn’t going to be re-elected Lincoln would at least leave a lasting legacy by officially freeing the slaves. Lincoln truly had nothing to lose?

The Emancipation infuriated the Rebels. They could no longer hide behind the veil of states rights. If they continued the war, the confederates were now openly fighting to preserve the use of slave labor.

The rebels up until that point had been content to fight defensively and let the Union Army attack them. They hoped the Union would tire of the war and go away. Now, with Emancipation issues at hand, the Confederates realized that if they wanted to preserve their way of life—it had to be all out victory or nothing. With one stroke of the pen, Lincoln ended further compromises on slavery issues. Many historians believe that was the day God switched sides.

Now, the South had to go on the offensive for the first time in the war. They eyed invading the North and capture a major city like Harrisburg (minimum) or Philadelphia (maximum) and in doing so they would deliver a crippling blow to the Union Army.

The South believed by hostaging Philadelphia, for example, that feat would galvanize anti-war sentiment forcing Lincoln to end the war by allowing the Confederacy to exist as a separate nation. Rebel General Robert E. Lee banked on that victory to bring European allies into his camp. Victorious as they had been before Gettysburg, the South was sorely in need of manpower and materiel that European alliances would provide.

The village of Gettysburg, PA-- at the hub of seven major roads—stood in the way of the rebel invasion. The village was where the two major armies ran finally ran into each other. To present day military and political scholars and history buffs, the ensuing three-day battle and its post-war ramifications remain at the crossroads of world fascination with the U.S. Civil War.

The previous paragraph ends this blog’s political discussion of the War Between the States. For the rest of the week, this space will publish travel notes on visiting Gettysburg.

Tuesday: Where to Stay. Add historic lodging to the experience.


Photo by Phyllis Shess: Blog author consults with the President outside the Gettysburg Museum and Visitor Center at Gettysburg National Military Park