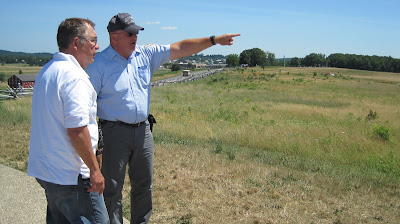 GAR'S FIRST RATE—In 2011, I started my commemoration of the 150th anniversary of the Civil War by visiting the Gettysburg Museum and Visitor Center at Gettysburg National Military Park for a battlefield tour (1195 Baltimore Pike, www.nps.gov/gett), where you can plan your tour by selecting from several options: a Licensed Battlefield Guide bus tour; a personalized Licensed Battlefield Guide car tour; or a self-guided audio CD tour, available in the Museum Bookstore.

Pick the personalized car tour and ask for licensed battlefield guide Gar Phillips, a master historic storyteller. Gar will take you to the important sites of the three-day battle. He will steer you (literally in your car) to the untold and equally significant stories of that bloody battle that left behind more than 51,000 soldiers who were killed, wounded, captured or missing.

I thought I knew a lot about Gettysburg, but after listening to Gar as he drove our rented car, those two hours inspired me to learn even more.  His insight pointed me toward  countless hours of rewarding personal Gettysburg research.

Gar’s tour pointed out where the battles were fought and explained many of the historic marker that dot the preserved battlefield. I also learned a new definition of courage by reading the plaque on a statue commemorating the 1st Minnesota, a band of 280 unsung federals, soldiers, who are credited for stalling two attacking rebel brigades and helping to save Day Two’s battle from becoming a Southern victory.

Also, worth visiting is the village of Gettysburg with its quaint restaurants and historic hotels and buildings. Many of the original buildings still bear bullet holes from the battle. South of town is the Gettysburg Cemetery where Abraham Lincoln gave his immortal Gettysburg Address.

Photo: Gar Phillips with Pillar to Post blog founder and editor Tom Shess. Gar and Tom are standing NW of Gettysburg at Oak Ridge. He is pointing to the west where along the Chambersburg Pike, General Lee’s vanguard approached to start the battle on July 1, 1863.