---
BREAKING NEWS ON APPOMATTOX
See end of blog below.
---

PRELUDE TO SURRENDER--During the days leading up to the eventual surrender of the South on April 9, 1865, General Robert E. Lee and General Ulysses S. Grant had been in correspondence via battlefield memos.  Posted here are those historic letters that are now in the public domain:

"General R.E. Lee, Commanding C.S.A.:
5 P.M., April 7th, 1865.
The results of the last week must convince you of the hopelessness of further resistance on the part of the Army of Northern Virginia in this struggle. I feel that it is so, and regard it as my duty to shift from myself the responsibility of any further effusion of blood by asking of you the surrender of that portion of the Confederate States army known as the Army of Northern Virginia.
U.S. Grant, Lieutenant-General"

The note was carried through the Confederate lines and Lee promptly responded:

"April 7th, 1865.
General: I have received your note of this date. Though not entertaining the opinion you express of the hopelessness of further resistance on the part of the Army of Northern Virginia, I reciprocate your desire to avoid useless effusion of blood, and therefore, before considering your proposition, ask the terms you will offer on condition of its surrender.
R.E. Lee, General."

Grant received Lee's message after midnight and replied early in the morning giving his terms for surrender:

"April 8th, 1865.
General R.E. Lee, Commanding C.S.A.:
Your note of last evening in reply to mine of the same date, asking the conditions on which I will accept the surrender of the Army of Northern Virginia, is just received. In reply I would say that, peace being my great desire, there is but one condition I would insist upon,--namely, that the men and officers surrendered shall be disqualified for taking up arms against the Government of the United States until properly exchanged. I will meet you, or will designate officers to meet any officers you may name for the same purpose, at any point agreeable to you, for the purpose of arranging definitely the terms upon which the surrender of the Army of Northern Virginia will be received.
U.S. Grant, Lieutenant-General"

The fighting continued and as Lee retreated further to the West he replied to Grant's message:

"April 8th, 1865.
General: I received at a late hour your note of today. In mine of yesterday I did not intend to propose the surrender of the Army of Northern Virginia, but to ask the terms of your proposition. To be frank, I do not think the emergency has arisen to call for the surrender of this army, but, as the restoration of peace should be the sole object of all, I desired to know whether your proposals would lead to that end. I cannot, therefore, meet you with a view to surrender the Army of Northern Virginia; but as far as your proposal may affect the Confederate States forces under my command, and tend to the restoration of peace, I should be pleased to meet you at 10 A.M. to-morrow on the old state road to Richmond, between the picket-lines of the two armies.
R.E. Lee, General."

Exhausted from stress and suffering the pain from a severe headache, Grant replied to Lee around 5 o'clock in the morning of April 9.

"April 9th, 1865.
General: Your note of yesterday is received. I have not authority to treat on the subject of peace. The meeting proposed for 10 A.M. today could lead to no good. I will state, however, that I am equally desirous for peace with yourself, and the whole North entertains the same feeling. The terms upon which peace can be had are well understood. By the South laying down their arms, they would hasten that most desirable event, save thousands of human lives, and hundreds of millions of property not yet destroyed. Seriously hoping that all our difficulties may be settled without the loss of another life, I subscribe myself, etc.,
U.S. Grant, Lieutenant-General"

Still suffering his headache, General Grant approached the crossroads of Appomattox Court House where he was over taken by a messenger carrying Lee's reply.

"April 9th, 1865.
General: I received your note of this morning on the picket-line, whither I had come to meet you and ascertain definitely what terms were embraced in your proposal of yesterday with reference to the surrender of this army. I now ask an interview, in accordance with the offer contained in your letter of yesterday, for that purpose.
R.E. Lee, General."

Grant immediately dismounted, sat by the road and wrote the following reply to Lee.

"April 9th, 1865.
General R. E. Lee Commanding C. S. Army:
Your note of this date is but this moment (11:50 A.M.) received, in consequence of my having passed from the Richmond and Lynchburg road to the Farmville and Lynchburg road. I am at this writing about four miles west of Walker's Church, and will push forward to the front for the purpose of meeting you. Notice sent to me on this road where you wish the interview to take place will meet me.
U. S. Grant, Lieutenant-General."

RECAP: Grant and Lee met on April 9, 1865, at the home of Wilmer McLean in the village named Appomattox Courthouse. The meeting lasted approximately two and one-half hours and at its conclusion the bloodliest conflict in the nation's history neared its end.

TOMORROW: GENERAL PORTER’S EYEWITNESS DESCRIPTION OF THE SIGNING OF THE SURRENDER DOCUMENTS


BREAKING NEWS FOR TOMORROW:
BELLS RING AT APPOMATTOX--For the past four years, the National Park Service and many other organizations and individuals have been commemorating the 150th Anniversary of the Civil War and the continuing efforts for human rights today. On April 9, 1865, Union Gen. Ulysses S. Grant met Confederate Gen. Robert E. Lee to set the terms of surrender of Lee’s Army of Northern Virginia.

In conjunction with a major event at Appomattox Court House National Historical Park, the National Park Service and its partners invite communities across the nation to join in this commemoration. The bells will ring first at Appomattox at 3:00 p.m. on April 9, 2015. The ringing will coincide with the moment the historic meeting between Grant and Lee in the McLean House at Appomattox Court House ended. While Lee’s surrender did not end the Civil War, the act is seen by most Americans as the symbolic end of four years of bloodshed.

After the ringing at Appomattox, bells will reverberate across the country. Churches, temples, schools, city halls, public buildings, historic sites, and others are invited to ring bells precisely at 3:15 pm for four minutes (each minute symbolic of a year of war). If you have access to any such organizations, please encourage them to participate.

The Gettysburg Foundation and Gettysburg National Military Park will be participating in Bells Across the Land by having ringing bells in the Visitor Center lobby and at the Gettysburg Lincoln Railroad Station at 3:15 pm on Thursday, April 9. And on the West Coast that would be Noon.
. 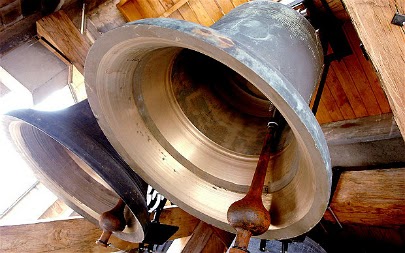