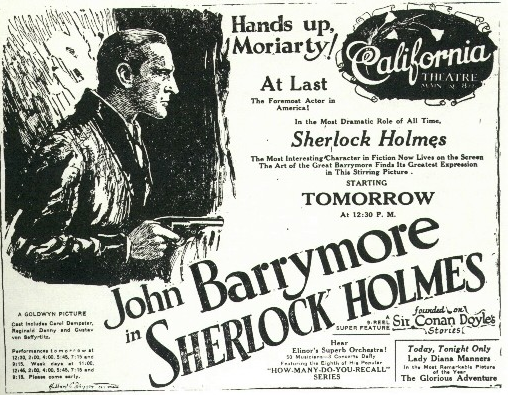 Yes, there is a blog that reviews silent movies.  Called Movies Silently: Celebrate silent film, it details in length the 1922 film featuring a remarkable cast led by John Barrymore as Sherlock.
The campy review by Fritz Kramer is just the proverbial ticket if you wish to do a bit of advance research before you catch a one-night  July 12 presentation of the film as part of Save Our Heritage Organisation’s summer silent film series.  For Kramer’s review go to http://moviessilently.com/2014/03/16/sherlock-holmes-1922-a-silent-film-review/

Tickets are $10 (see below for online purchase info) and will be shown at the series venue the Adobe Chapel, 3963 Conde Street in Old Town San Diego.
SOHO makes an event of the evening by beginning with light refreshments at 7 pm before the projector goes on at 7:30 pm.

Barrymore’s 1922 version was based on a play by William Gillette based on the story by Arthur Conan Doyle. It was one of the first times Doyle’s famed detective hit Hollywood.  SOHO’s insists this piece of cinematic history captures the spirit and essence of a long-forgotten cinematic style.
Go see the flick, have some fun while contributing to SOHO’s ongoing historic preservation mission.  And, don’t miss Kramer’s review!
The Plot (spoiler alert).
Sherlock Holmes (John Barrymore) is a master at solving the most impenetrable mysteries, but he has his work cut out for him on his latest case. Prince Alexis (Reginald Denny) is accused of a theft that he insists he didn't commit. The evidence is stacked against him, but Holmes' trusted friend, Dr. Watson (Roland Young), vouches for the prince. As the famed detective investigates, he's brought face to face with his most devious adversary yet -- Professor Moriarty (Gustav von Seyffertitz).
Initial release: March 7, 1922
Director: Albert Parker
Producer: F.J. Godsol
Screenplay: Marion Fairfax, Earle Browne
Story by: Arthur Conan Doyle, William Gillette
Of note: Heddy Hopper (pre-column) appears in film.

Pre-Talkies.
Using only visual imagery to convey the story, the silent film is an art form unto itself, and Silent Sundays brings film fans the opportunity to see a variety of styles and techniques used in the pre-Talkie Era.

The Venue.
The Adobe Chapel was originally built in 1850 as a home, and was converted to a church by Don José Aguirre in 1858. Father Antonio D. Ubach, formerly a missionary among the Indians and model for Father Gaspara in Helen Hunt Jackson's classic novel Ramona, was parish priest here from 1866 to 1907. After having been bulldozed for street realignment in the 1930s, the WPA rebuilt the adobe chapel in 1937. Much of the interior artifacts from the original chapel have been retained, including the tabernacle, the altar with its beautiful marbleized finish, some woodwork including pews and doors, and José Aguirre's tombstone is laid in the floor. Today it is a museum and wedding, lecture and arts venue.