One sister is a retired deputy district attorney trial prosecutor, while the other is a retired IRS agent. Both siblings are Army brats with dad being a decorated WWII officer (Silver Star). So where do two sisters go for fun in the Kansas City, Missouri area?

Easy answer.  They visit a money museum, drive by a federal prison and stop in at two military museums.

First stop.
Follow the money.
As museums go the Money Museum at the Federal Reserve Bank of Kansas City is not that old.  The free admission museum opened in April 2014. 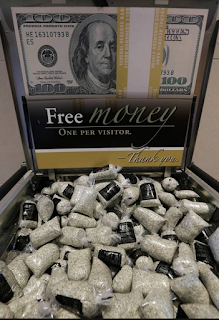 The KC Federal Bank is one of 12 regional reserve banks that, along with the Board of Governors in Washington, DC, that make up our nation’s central bank.

The KC Money Museum offers a free, up-close look of the nation's financial system in action. Learn about the Fed through fun and interactive exhibits that explore banking, the economy and how monetary policy decisions impact your family's bottom line.

Fun for all ages; test your strength and lift a solid gold bar; place your photo in the center of custom designed currency that can be emailed home for sharing with family and friends; take a peek into a four-story cash vault; view the automated robots that move the money; and try to detect counterfeit currency.

Walk-in guests and groups are always welcome. Free guided tours can be arranged for educational, civic, professional, and social groups of 12 or more with advance registration.

And best of all, visitors take home a free bag of shredded currency.  Museum staff says the bag holds about $165 in diced, sliced and chopped cash.

Second stop.
The Big House.
We’ve all heard the term “being sent up the river” as another way of saying going to prison.  In the Kansas City area about an hour’s drive up the Missouri River on the Kansas side is Ft. Leavenworth, KS, which is home to the oldest (built in 1903) United States Penitentiary in the nation.

Like most prisons there are no public tours—who would want to visit?  Nevermind.  The Big House as Leavenworth prison is called can’t be toured but if you head west out of downtown Ft. Leavenworth on U.S. Highway 73 you’ll find the walled city on Metropolitan Avenue.  As you drive by you can readily see the big dome of the 1,800 medium security federal prison.

The prison has held notable criminals such as Robert Stroud, who after being transferred west was known as the birdman of Alcatraz; James Earl Ray, the assassin of Martin Luther King served a term in Leavenworth for forgery.  Also, Michael Vick served 23 months for operating an illegal dog ring.  Former Army shrink Nidal Hassan is awaiting execution for mass murder and terrorism.  Other prisoners included Machine Gun Kelly and Bugs Moran.

As museums go this one is huge.  It’s filled with historic military memorabilia such as weapons of all kinds, military uniforms, supplies/wagons, and so forth. There also is a great description of chronological events that took place from the fort that protected and escorted settlers heading west, and were involved with the various wars (like Mexican and Civil Wars) and also were part of numerous Indian battles and pursuing them to the reservations.

U.S. Army Colonel Henry Leavenworth founded the fort in 1827.  It was especially active during the years when the Wild West was being explored.

Fourth Stop
National World War I Museum and Memorial
Back on the Missouri side of the river, the next stop is the 48-acre site of the WWI Museum, which was built in 1926 to honor service men and women who served in World War I.

In 2004, the Liberty Memorial Museum was designated by the United States Congress as the National World War I Museum of the United States. The expanded facility opened to the public in December 2006 showcasing the artifact collection that began in 1920. The new subterranean facility was designed by Ralph Appelbaum Associates and greatly expanded the original facilities of Exhibit Hall and Memory Hall, located on the main courtyard. On December 19, 2014, President Barack Obama signed legislation recognizing the Liberty Memorial as a national memorial, which affectively redesignated the Museum as the National World War I Museum and Memorial.