“The Armies of the Wilderness”
A Poem,
By Herman Melville
Virginia, May, 1864.

I.
Like snows the camps on Southern hills
Lay all the winter long,
Our levies there in patience stood--
They stood in patience strong.
On fronting slopes gleamed other camps
Where faith as firmly clung:
Ah, froward king! so brave miss--
The zealots of the Wrong.

In this strife of brothers
(God, hear their country call),
However it be, whatever betide,
Let not the just one fall.

Through the pointed glass our soldiers saw
The base-ball bounding sent;
They could have joined them in their sport
But for the vale's deep rent.
And others turned the reddish soil,
Like diggers of graves they bent:
The reddish soil and tranching toil
Begat presentiment.

Did the Fathers feel mistrust?
Can no final good be wrought?
Over and over, again and again
Must the fight for the Right be fought?

They lead a Gray-back to the crag:
"Your earth-works yonder--tell us, man"
"A prisoner--no deserter, I,
Nor one of the tell-tale clan"
His rags they mark: "True-blue like you
Should wear the color--your Country's, man"
He grinds his teeth: "However that be,
Yon earth-works have their plan."

Such brave ones, foully snared
By Belial's wily plea,
Were faithful unto the evil end--
Feudal fidelity.

"Well, then, your camps--come, tell the names"
Freely he leveled his finger then:
"Yonder--see--are our Georgians; on the crest,
The Carolinians; lower, past the glen,
Virginians--Alabamians--Mississippians--Kentuckians
(Follow my finger)--Tennesseans; and the ten
Camps there--ask your grave-pits; they'll tell.
Halloa! I see the picket-hut, the den
Where I last night lay." "Where's Lee"
"In the hearts and bayonets of all yon men!"

The tribes swarm up to war
As in ages long ago,
Ere the palm of promise leaved
And the lily of Christ did blow.

Their mounted pickets for miles are spied
Dotting the lowland plain,
The nearer ones in their veteran-rags--
Loutish they loll in lazy disdain.
But ours in perilous places bide
With rifles ready and eyes that strain
Deep through the dim suspected wood
Where the Rapidan rolls amain.

The Indian has passed away,
But creeping comes another--
Deadlier far. Picket,
Take heed--take heed of thy brother!

From a wood-hung height, an outpost lone,
Crowned with a woodman's fort,
The sentinel looks on a land of dole,
Like Paran, all amort.
Black chimneys, gigantic in moor-like wastes,
The scowl of the clouded sky retort;
The hearth is a houseless stone again--
Ah! where shall the people be sought?

Since the venom such blastment deals,
The south should have paused, and thrice,
Ere with heat of her hate she hatched
The egg with the cockatrice.

A path down the mountain winds to the glade
Where the dead of the Moonlight Fight lie low;
A hand reaches out of the thin-laid mould
As begging help which none can bestow.
But the field-mouse small and busy ant
Heap their hillocks, to hide if they may the woe:
By the bubbling spring lies the rusted canteen,
And the drum which the drummer-boy dying let go.

Dust to dust, and blood for blood--
Passion and pangs! Has Time
Gone back? or is this the Age
Of the world's great Prime?

The wagon mired and cannon dragged
Have trenched their scar; the plain
Tramped like the cindery beach of the damned--
A site for the city of Cain.
And stumps of forests for dreary leagues
Like a massacre show. The armies have lain
By fires where gums and balms did burn,
And the seeds of Summer's reign.

Where are the birds and boys?
Who shall go chestnutting when
October returns? The nuts--
O, long ere they grow again.


Herman Melville (1819-1891) was an American novelist, short story writer, and poet of the American Renaissance period best known for Typee, a romantic account of his experiences in Polynesian life, and his whaling novel Moby-Dick.

They snug their huts with the chapel-pews,
In court-houses stable their steeds--
Kindle their fires with indentures and bonds,
And old Lord Fairfax's parchment deeds;
And Virginian gentlemen's libraries old--
Books which only the scholar heeds--
Are flung to his kennel. It is ravage and range,
And gardens are left to weeds.

Turned adrift into war
Man runs wild on the plain,
Like the jennets let loose
On the Pampas--zebras again.

Like the Pleiads dim, see the tents through the storm--
Aloft by the hill-side hamlet's graves,
On a head-stone used for a hearth-stone there
The water is bubbling for punch for our braves.
What if the night be drear, and the blast
Ghostly shrieks? their rollicking staves
Make frolic the heart; beating time with their swords,
What care they if Winter raves?

Is life but a dream? and so,
In the dream do men laugh aloud?
So strange seems mirth in a camp,
So like a white tent to a shroud.

The May-weed springs; and comes a Man
And mounts our Signal Hill;
A quiet Man, and plain in garb--
Briefly he looks his fill,
Then drops his gray eye on the ground,
Like a loaded mortar he is still:
Meekness and grimness meet in him--
The silent General.

Were men but strong and wise,
Honest as Grant, and calm,
War would be left to the red and black ants,
And the happy world disarm.

That eve a stir was in the camps,
Forerunning quiet soon to come
Among the streets of beechen huts
No more to know the drum.
The weed shall choke the lowly door,
And foxes peer within the gloom,
Till scared perchance by Mosby's prowling men,
Who ride in the rear of doom.

Far West, and farther South,
Wherever the sword has been,
Deserted camps are met,
And desert graves are seen.

The livelong night they ford the flood;
With guns held high they silent press,
Till shimmers the grass in their bayonets' sheen--
On Morning's banks their ranks they dress;
Then by the forests lightly wind,
Whose waving boughs the pennons seem to bless,
Borne by the cavalry scouting on--
Sounding the Wilderness.

Like shoals of fish in spring
That visit Crusoe's isle,
The host in the lonesome place--
The hundred thousand file.

The foe that held his guarded hills
Must speed to woods afar;
For the scheme that was nursed by the Culpepper hearth
With the slowly-smoked cigar--
The scheme that smouldered through winter long
Now bursts into act--into war--
The resolute scheme of a heart as calm
As the Cyclone's core.

The fight for the city is fought
In Nature's old domain;
Man goes out to the wilds,
And Orpheus' charm is vain.

In glades they meet skull after skull
Where pine-cones lay--the rusted gun,
Green shoes full of bones, the mouldering coat
And cuddled-up skeleton;
And scores of such. Some start as in dreams,
And comrades lost bemoan:
By the edge of those wilds Stonewall had charged--
But the Year and the Man were gone.

At the height of their madness
The night winds pause,
Recollecting themselves;
But no lull in these wars.

A gleam!--a volley! And who shall go
Storming the swarmers in jungles dread?
No cannon-ball answers, no proxies are sent--
They rush in the shrapnel's stead.
Plume and sash are vanities now--
Let them deck the pall of the dead;
They go where the shade is, perhaps into Hades,
Where the brave of all times have led.

There's a dust of hurrying feet,
Bitten lips and bated breath,
And drums that challenge to the grave,
And faces fixed, forefeeling death.

What husky huzzahs in the hazy groves--
What flying encounters fell;
Pursuer and pursued like ghosts disappear
In gloomed shade--their end who shall tell?
The crippled, a ragged-barked stick for a crutch,
Limp to some elfin dell--
Hobble from the sight of dead faces--white
As pebbles in a well.

Few burial rites shall be;
No priest with book and band
Shall come to the secret place
Of the corpse in the foeman's land.

Watch and fast, march and fight--clutch your gun?
Day-fights and night-fights; sore is the stress;
Look, through the pines what line comes on?
Longstreet slants through the hauntedness?
'Tis charge for charge, and shout for yell:
Such battles on battles oppress--
But Heaven lent strength, the Right strove well,
And emerged from the Wilderness.

Emerged, for the way was won;
But the Pillar of Smoke that led
Was brand-like with ghosts that went up
Ashy and red.

None can narrate that strife in the pines,
A seal is on it--Sabaean lore!
Obscure as the wood, the entangled rhyme
But hints at the maze of war--
Vivid glimpses or livid through peopled gloom,
And fires which creep and char--
A riddle of death, of which the slain
Sole solvers are.

Long they withhold the roll
Of the shroudless dead. It is right;
Not yet can we bear the flare
Of the funeral light.


Source:
From the public domain:
From Battle-Pieces and Aspects of the War: Civil War Poems (1866) 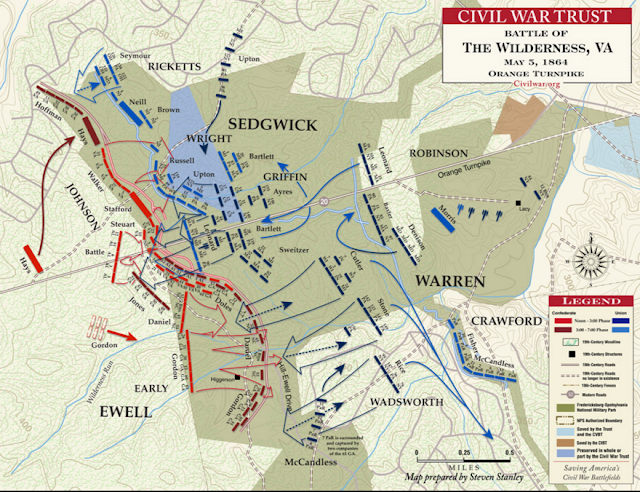