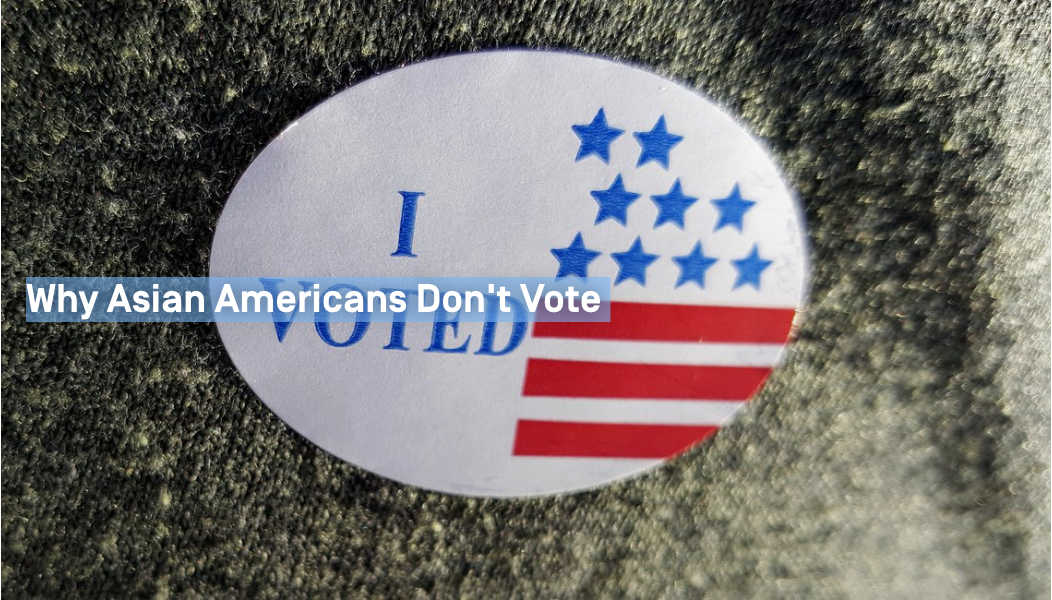 OPINION: New America is a Washington DC based non-partisan public policy group dedicated to the renewal of American politics, prosperity, and purpose in the Digital Age. They are kind to share content with the blogging community.  Here’s a link for New America.

GUEST BLOG / Caitlin Kim, former NewAmerica.org staffer--Amid worries that the United States is careening toward illiberal democracy, we’re faced with a key question: How can we change course? Increasing voter participation is, perhaps, the most straightforward way to improve democracy in the context of our existing political institutions. After all, voter turnout across the United States has never been all that extraordinary. Some groups, however, vote at drastically lower rates than others.

Thus, with the 2018 midterm elections fast approaching, it might be prudent to consider how to engage one of the most overlooked segments of the American body politic: Asian Americans.

Asian Americans, though currently only 5.8 percent of the U.S. population, are the fastest-growing racial minority in the United States, and are expected to make up one-tenth of all voters by 2044. Despite this impressive growth, however, Asian Americans have one of the most dismal voter turnout rates—47 percent—compared to 66 percent for black voters and 64 percent for non-Hispanic white voters. At first glance, these numbers might not seem so alarming. I mean, according to the “model minority” myth (don’t worry—more on this later), Asian Americans’ economic success is all thanks to their emphasis on hard work, self-sufficiency, and keeping to themselves. It might make sense, then, to claim that their low voter participation rate is, at least in part, a result of their broader disengagement from politics.

Yet a closer look at the issue quashes this simple line of thinking, and reveals that Asian Americans do care about politics. Though they tend not to identify with either party, the majority indicates strong opinions on relevant issues and express support for specific candidates. What’s more, when they do vote, their vote is a weighty one; it’s been shown that Asian Americans make up the winning margin in many state districts.

So why, then, don’t Asian Americans seem to exercise their civic duty?

***********
New America Awarded "Best U.s. Social Policy Think Tank" from Prospect Magazine.
Read article. Click here.
***********
For some, it’s perhaps a pervasive feeling of not belonging in American politics, which fuels a cycle of non-participation. Take, for example, the fact that politicians rarely target their outreach toward Asian Americans. Compared to the national average of 53 percent, only 31 percent of Asian Americans reported being contacted by candidates or parties in 2012. Less outreach from politicians understandably alienates these voters, and this behavior decreases the likelihood that Asian Americans will show up at the polls. This might then create a corrosive feedback loop, with politicians feeling perhaps less motivated to allocate their valuable campaign resources toward this group in future electoral contests. And this, in turn, increases the sentiment among Asian Americans that politics—though important—isn’t truly their place to get involved.

In addition to receiving less campaign funds and outreach, Asian Americans also face obstacles once it comes time to cast their vote. Three-quarters of Asian-American adults are foreign-born, and a daunting language barrier affects the 35 percent of Asian-American adults who demonstrate limited English proficiency. For these individuals, the language barrier presents an immediate challenge to navigating the election process—and even understanding the ballots themselves. Though Section 203(c) of the Voting Rights Act mandates that translated materials be available at the polls, in practice this policy is rarely implemented. And when it is, it’s not done effectively, as detailed in a study by Asian Americans Advancing Justice.

The study investigated trends in implementation of bilingual election requirements during the 2012 presidential election and found that even when translated ballots and other materials were available, they weren’t easily accessible, or that poll workers were unaware that they existed. In some cases, according to the study, poll workers were actually unwilling to provide such materials to voters.

But there’s another, arguably more insidious, layer to peel back here. This steers us back to the model minority myth, which generalizes Asian Americans as hardworking, successful, and non-disruptive. With origins dating back to the Cold War and Civil Rights movement, the stereotype leads Asian Americans (and the United States, as a whole) to ignore the persistent economic and social obstacles that the community faces. Not only does this dampen a sense of urgency that might otherwise lead them to vote, but it also leads politicians to overlook issues affecting Asian Americans. The model minority myth, it should be said, has also been used against other minorities, particularly African Americans, as a way of twisting the narrative to “prove” that anyone can achieve the American Dream if they work hard enough and stay quiet. If Asians can make it on their own, why can’t everyone else? the thinking goes.

However, perhaps the overarching factor that limits political engagement, especially for first- and second-generation immigrants, is the struggle to reconcile two often competing identities: Asian and American. Even after spending decades in the United States, many Asian Americans are still seen as “foreigners in their own country.” We can see one of the most absurd examples of this sentiment in Jesse Watters’ controversial segment on Asian Americans. The Fox News critic ridiculed passersby in Chinatown and inserted video clips of massage parlors and martial arts studios, all while “Kung Fu Fighting” played in the background.

Though the segment derides Asians by deploying the most tired and uncreative stereotypes, its subtler message—that Asian Americans are still a long way from being considered “real” Americans—was enough to provoke an exhausted sigh from many members of the Asian-American community.

Looking ahead, making inroads will require a multi-pronged approach. For one, systemic changes to our electoral process—including reallocation of campaign funds, increased outreach toward Asian Americans, and a more robust effort to address the language barrier—will be key. And, moreover, this ought to be coupled with a change in mindset. The next generation of Asian Americans must recognize that they can still respect the values and traditions of their parents and grandparents, while at the same time confidently occupying a new role in the American public arena. Many first-generation immigrants couldn’t afford to think past mere survival; thinking about how to influence the greater community was secondary to tending to their family’s immediate needs, and running for office was neither a possibility nor a priority.

Now, however, for many of their children and grandchildren, civic engagement is both an option and a necessity. Some of these individuals may choose to run for office and increase Asian-American representation in politics and government—but whatever’s done, at the very least, everyone ought to show up and vote.