SPACE CADETS / OUR OTHER MACHINE IN SPACE 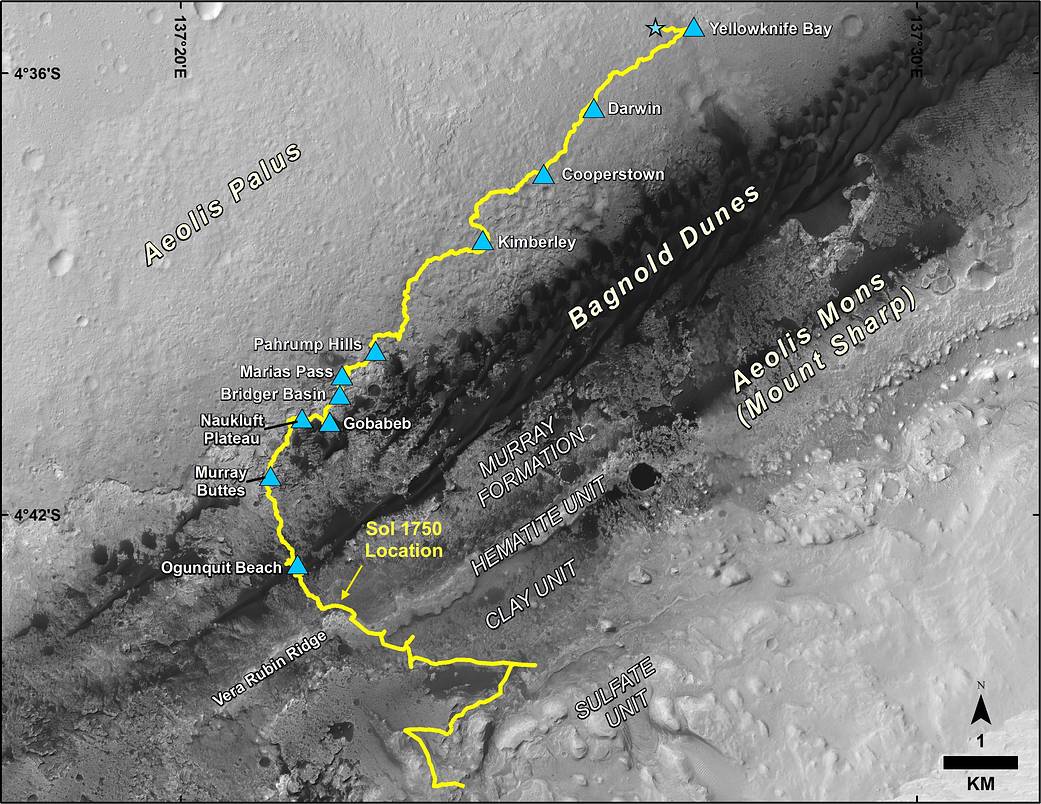 This map shows the route driven by NASA's Curiosity Mars rover, from the location where it landed in August 2012 to its location in July 2017, and its planned path to additional geological layers of lower Mount Sharp.

The blue star near top center marks "Bradbury Landing," the site where Curiosity arrived on Mars on Aug. 5, 2012, PDT (Aug. 6, EDT and Universal Time). Blue triangles mark waypoints investigated by Curiosity on the floor of Gale Crater and, starting with "Pahrump Hills," on Mount Sharp. The Sol 1750 label identifies the rover's location on July 9, 2017, the 1,750th Martian day, or sol, since the landing.

In July 2017, the mission is examining "Vera Rubin Ridge" from the downhill side of the ridge. Spectrometry observations from NASA's Mars Reconnaissance Orbiter have detected hematite, an iron-oxide mineral, in the ridge. Curiosity's planned route continues to the top of the ridge and then to geological units where clay minerals and sulfate minerals have been detected from orbit.

The base image for the map is from the High Resolution Imaging Science Experiment (HiRISE) camera on the Mars Reconnaissance Orbiter. North is up. "Bagnold Dunes" form a band of dark, wind-blown material at the foot of Mount Sharp.

The scale bar at lower right represents one kilometer (0.62 mile)..

More information about Curiosity is online at http://www.nasa.gov/msl and http://mars.jpl.nasa.gov/msl/

EYES MOVE TO NEW HORIZONS PROBE
Now that Cassini is vaporized, Earthlings can now pay attention to the probe that brought back all those amazing images of Pluto and its surroundings.
Now New Horizons is off deeper into the Kuiper Belt.  For the latest NASA update on New Horizons Click here.