VINTAGE:
The millions of visitors who came to Chicago during the 1893 Columbian Exposition took home new ideas in commerce, industry, technology and entertainment. They crossed paths with others from around the world and walked away with a new perspective on Chicago.

Travel writer James Fullarton Muirhead visited the fair from Scotland and later wrote: “Since 1893, Chicago ought never to be mentioned as ‘Porkopolis’ without a simultaneous reference to the fact that it was also the creator of the White City, with its Court of Honor, perhaps the most flawless and fairy-like creation, on a large scale, of man’s invention.”

Today, Chicago’s Beaux-Arts buildings serve as a reminder of the exposition. In fact, many Beaux-Arts buildings around the country owe their existence to the White City. One of the fair’s most prolific physical legacies is the Ferris Wheel, which was invented in 1893 for the exposition’s amusements area on the Midway Plaisance. Thousands of “Chicago Wheels” now rise above cities around the world.

The original Ferris Wheel, sometimes also referred to as the Chicago Wheel, was designed and constructed by George Washington Gale Ferris Jr. With a height of 80.4 metres (264 ft) it was the tallest attraction at the World's Columbian Exposition in Chicago, Illinois, where it opened to the public on June 21, 1893.  The original wheel was demolished in 1906.


MODERN:
Chicago’s Navy Pier has a brand new “just the right sized” Ferris wheel.  Dubbed the Centennial Wheel, it debuted in 2016 in honor of Navy Pier’s 100th anniversary.   The new wheel is the third to call Chicago home.  At 195-feet, the latest spinner is a Dutch Wheels Model DW60, and is complete with new LED lighting and comfy cabins to let riders take in a grand view of Chicagoland and Lake Michigan.
At roughly the same footprint as the “middle” one, which began offering rides in 1995 and gave its last one here in September, the new big wheel has 41 eight-persons each gondolas.

The new wheel is a different wheel than the old one, and it operates differently. The old one ran continuously and slowly, with riders getting one full, seven-minute revolution, then exiting as others got on. The new one holds 180 more riders, loads six cars at a time, then stops to load six more, and so on; once the ride is fully loaded, riders get another two revolutions, a 12-minute ride in all so a rider will go over the top at least three times.

Speaking of over the top, the new gondolas feature padded seats, TV screens and speakers. They are enclosed, with air conditioning and heating systems.

The older wheel — has found a new home in Branson, Missouri. 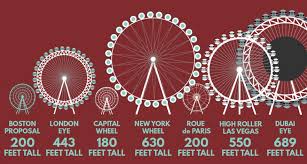