MEDIA MONDAY / AN ACE IN THE SPORTSWRITERS TRADE 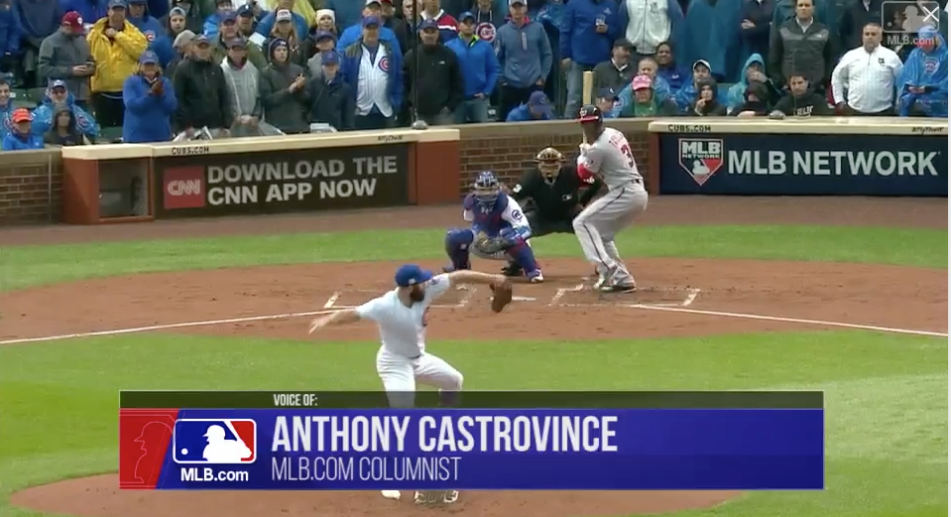 Editor’s note: If you can’t watch Major League baseball then the next best thing during the current off season is to read about the ifs and maybes regarding possible big league trades.  Because readers of Pillar to Post have access to daily sports pages and websites, this general interest blog seldom publishes guest blogs from sports writers.  But then there’s Anthony Castrovince, a reporter with MLB.com since 2004, who is simply excellent at his trade.  The following pre-season analysis by Castrovince is a solid example:

The air is filled with anticipation … and anxiety.

Spring Training camps open in a matter of days, and soon the preparation for 2018 will be upon us. But, uh, what about all those unfilled openings and unsigned free agents? The players are nervous, the fans are restless, and it could be a February unlike any the game has ever seen.

(Or maybe it'll remain quiet, only this time with camps going on.)

Here are a half-dozen predictions for the month of February:

1. Jake Arrieta stays unsigned
The truth is that there are going to be a lot of free agents still unsigned at the end of February. That's just the way this offseason has played out, and things might get to a point where the MLB Players Association has to put together some sort of Spring Training camp for the unemployed.

But I'm singling out Arrieta in this conversation because, despite his status as one of the top two arms available in the free-agent market, he strikes me as competitive enough and confident enough to take his free agency deep into the exhibition season and perhaps even into the regular season if that's what it takes to get the right deal with the right team. We know all about the pitcher attrition rate in this game, and there are always unforeseen circumstances that develop as spring camp rolls along and pitchers build up their workloads.

Arrieta could be the knight in shining armor, ready to swoop into a situation that needs saving. (For a not-so-small fee, of course.) We certainly know he'll keep himself in proper conditioning to be ready to roll.

2. Yu Darvish does sign -- with the Twins
Darvish would be comfortable with a return to the Rangers, but I just don't see them expending the kind of money he can obtain elsewhere. (It might very well be that Darvish holding out hope to return to Texas is what's clogging up the starting pitching marketplace.) The Cubs are a strong option, but Theo Epstein's reservations about the mega-pitching deal in this market make me wonder if they would go the extra mile -- or year, as it were -- with a 31-year-old Darvish. The Brewers are a strong option, but of course they can possibly bring in a nice pitching piece without spending major dollars by addressing their excess in the outfield.

At this point, I see the Twins as the team with the most incentive and financial flexibility to give Darvish what he wants. We've already had a report from MLB.com's Jon Paul Morosi that Minnesota could be the club willing to add a fifth guaranteed year with Darvish. The Twins have already beefed up their bullpen this offseason and they return a lineup that was the most productive in the game in the second half last year. Darvish would make you feel a lot better about Minnesota's chances of overtaking the Indians in the American League Central.

3. The remaining Royals free agents remain in Missouri
We've been wrong before, but Eric Hosmer's return to the Royals has begun to feel like a fait accompli as the club continues to pare down its payroll in hopes of inking Hosmer to the largest free-agent contract it has ever handed out. You don't rule out the possibility of the Padres upping their offer to land Hosmer, who, all things being equal, might assess the farm systems of these two clubs and determine San Diego has more help on the horizon and, ergo, a better chance of becoming a competitive club in the near future. Or hey, maybe somebody else swoops in -- although swooping is not exactly en vogue right now.

Long story short, I feel comfortable predicting Hosmer to go back to where he's comfortable. And I also feel comfortable with the idea of Mike Moustakas going to a Cardinals club that would improve its third-base outlook (and leave Matt Carpenter at first base) without having to surrender the young pieces it would have taken to land Josh Donaldson (who we know won't be dealt) or Manny Machado (who we wish would be dealt but probably won't).

It has been speculated that Moose could wind up with a one-year deal, then take his chances on a better contract next offseason (when he'll be 30). But, well, Donaldson and Machado are free agents next year, so that would be a pretty odd strategy.

4. The Yankees let it ride with the kids in the infield
We've been speculating about who the Yankees' addition at third base or second base will be from the moments they made the Starlin Castro and Chase Headley trades, and obviously there are still plenty of possibilities on the open market. But I see the Yanks using the early days of camp and early weeks of Grapefruit League play, if not the early weeks of the regular season, to give the young'uns -- Gleyber Torres, Miguel Andujar, Tyler Wade, Thairo Estrada and Ronald Torreyes -- every opportunity to bowl them over.

There will be growing pains, sure, but probably not enough to pose any serious threat to the Yankees' chances of winning the AL East, especially given the overall complexion of that lineup. New York is so adamant about resetting its luxury-tax penalty clock that it might be willing to go lean and mean at both second and third, leaving plenty of wiggle room in their budget for an in-season acquisition, be it an infielder or starting pitcher or whatever need arises.

5. The Brewers and D-backs swing a trade
I would like to publicly thank the Brewers for both saving January from the transaction-wire abyss and giving us so much to ponder with camps drawing near. Obviously, unfinished business abounds in baseball right now, but Milwaukee took such a go-for-the-throat approach with the Christian Yelich trade and Lorenzo Cain signing and now has so much outfield depth and so much incentive to add to its starting pitching group that it's hard to believe there won't be another domino to drop in the not-too-distant future.

Though I've proposed a deal with the Indians involving Danny Salazar and Domingo Santana, I think a more likely scenario is a deal with the D-backs for Patrick Corbin, who would bring the Brewers a left-handed rotation presence in his final year before free agency. Corbin's arrival wouldn't set Milwaukee aflame, but a repeat of a 2017 in which he logged 189 2/3 innings with an ERA+ that was 19 percent better than league average would be beneficial to the Brew Crew. As for Arizona, Keon Broxton would bring upside and five years of contractual control, which could be an important factor with A.J. Pollock nearing free agency.

The D-backs, who are pushed to the brink with their budget, would free up some cash that could possibly then be applied to the lower tiers of the starting-pitching market for a multiyear fit, open up some opportunity for prospects such as Anthony Banda and Taylor Clarke and, again, reel in a controllable outfield talent and perhaps an additional prospect.

6. The month ends with J.D. Martinez and the Red Sox seemingly on the cusp of a contract
You know, just like every other month this offseason.