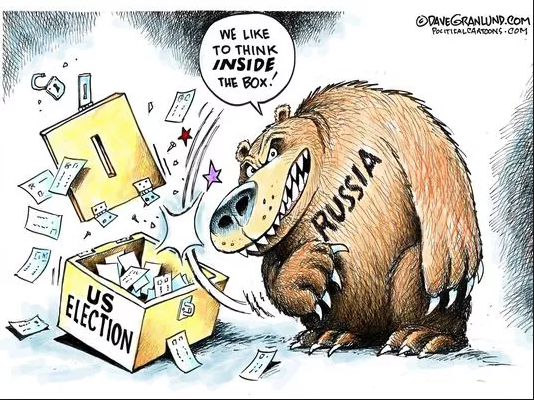 Move over John Le Carre* and Richard Condon** because your Russian espionage fiction has just been trumped by real life events.

Case in point, on Monday, February 22 the Washington Post published “The Russian Journalist Who Helped Uncover Election Meddling is Confounded by the Mueller Indictments.”  Here are a few lines from the Post’s Adam Taylor:

“...A 37-page indictment issued by special counsel Robert S. Mueller III’s team on Friday brings fresh American attention to one of the strangest elements of alleged Russian interference in the 2016 election: The Internet Research Agency (IRA), a state-sponsored “troll factory” in St. Petersburg. But much of the information Mueller published on Friday about the agency’s efforts to influence the election had already been published last October — in an article by a Russian business magazine, RBC.
“In a 4,500-word report titled “How the 'troll factory' worked the U.S. elections,” journalists Polina Rusyaeva and Andrey Zakharov offered the fullest picture yet of how the “American department” of the IRA used Facebook, Twitter and other tactics to inflame tensions ahead of the 2016 vote. The article also looked at the staffing structure of the organization and revealed details about its budget and salaries...”

The Russian reporters were taken aback how the story was such big news in the U.S. when it was no bombshell in Russia. It adds up to a whirlwind of espionage reality.

Wait there’s more:
Let’s go back to 2015, when New York Times Magazine penned “The Agency.”  Proving the Russian Trolling Agency was operating in plain sight before the U.S. 2016 Presidential elections.