THE BREWSPAPER / A PINT OR TWO AT YE OLDE FIGHTING COCK 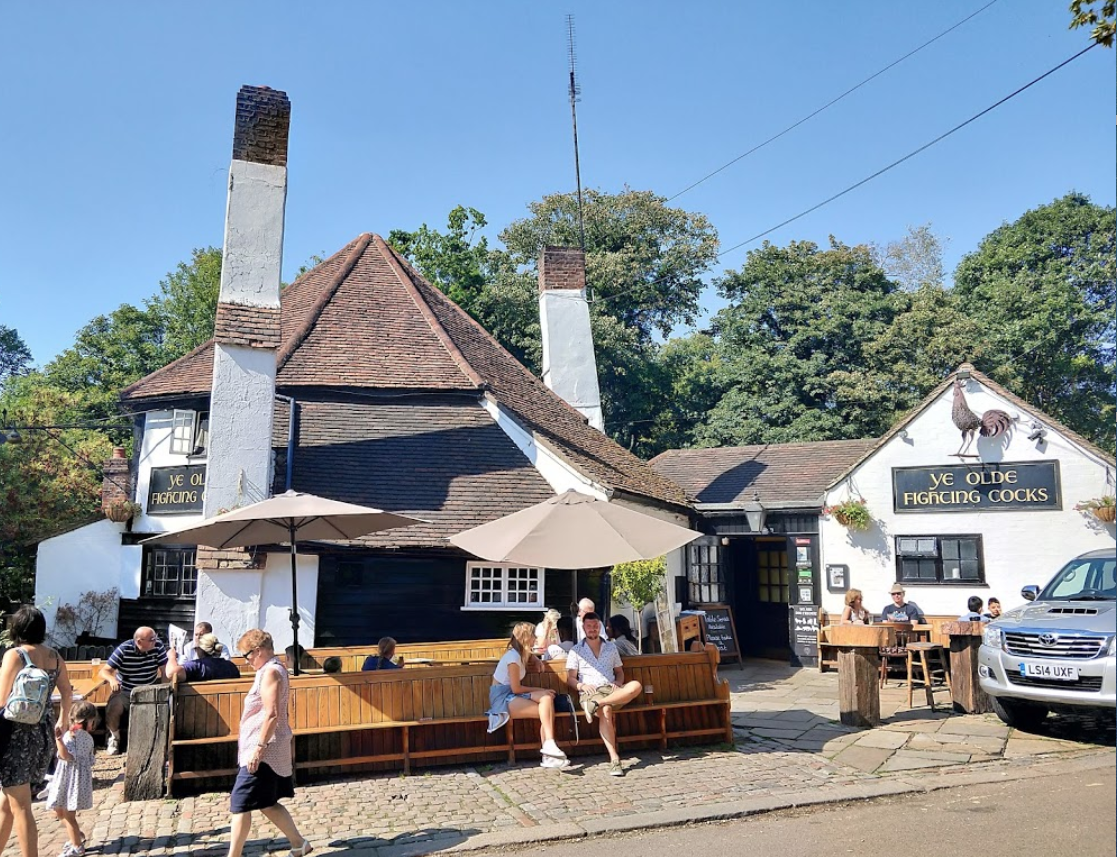 By Holden DeMayo, PillartoPost.org saloon editor--Ye Olde Fighting Cocks pub is across from the River Ver on Abbey Mill Lane in St. Albans, UK not far from the Roman Wall in the village of St. Albans and within walking distance along a pathway across the green to The Cathedral & Abbey Church of Saint Alban.

Bureaucratic records go back to 1756 as to the pub’s founding (different names since) but once inside you’ll note the low ceilings and ancient timber beams cry that it’s really far older.
Those telling a good story say the pub building goes back to the eighth century AD.  But, most likely it went up the day after the nearby Cathedral first opened for Mass and that was in the 1500s.
Nearby, Verulamium Park has ornamental lakes and the remains of the city's ancient Roman wall. Also here is the Verulamium Museum, displaying artefacts from the city’s Roman past, including mosaics and the Sandridge Hoard of gold coins. A 2nd-century Roman theatre stands nearby. 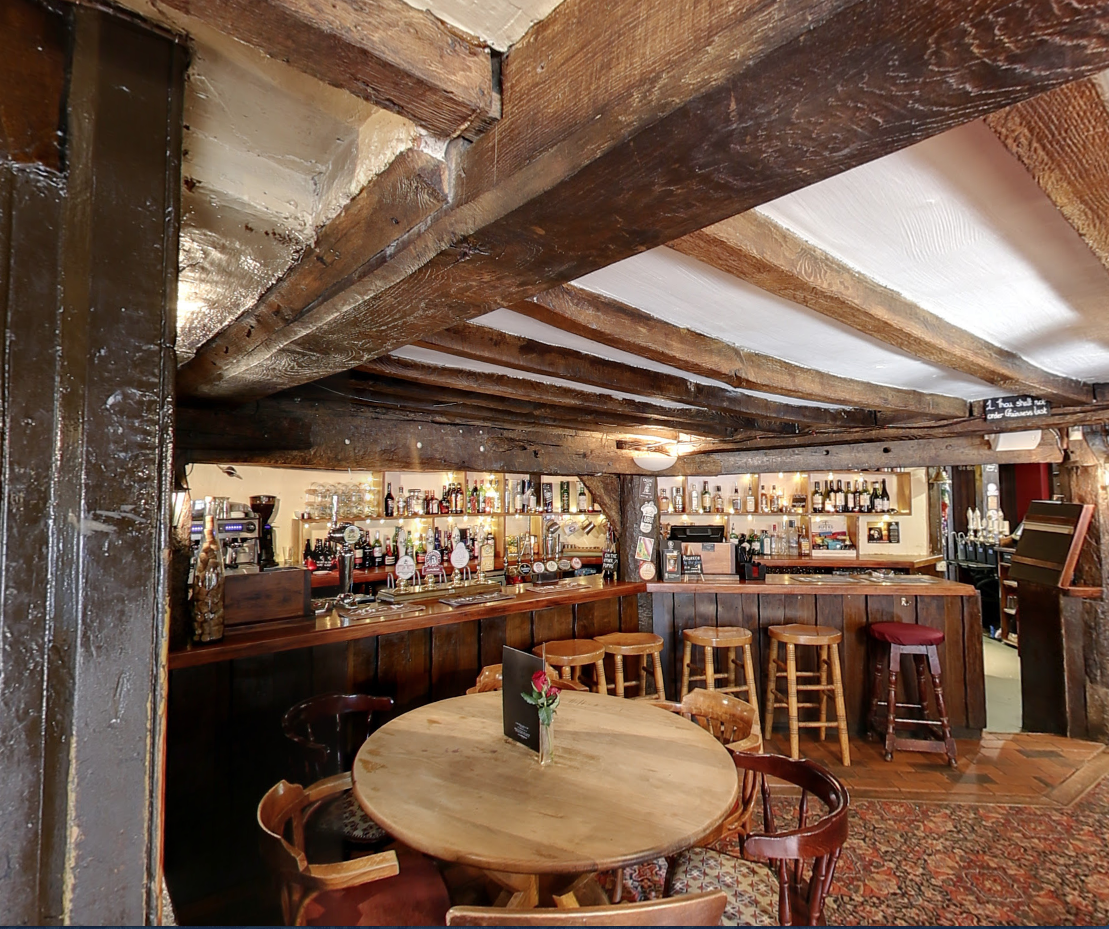 Management boasts (especially later at night) it is oldest public house in Great Britain, a claim Guinness Book of Records agrees with) but loyal publicans outside of St. Albans say otherwise.  There’s a sign outside noting that rebel Oliver Cromwell spent the night there during the English Civil War.
The current name is said to be a Victorian affectation, especially the “ye olde.”  Older names such as the “Round House” or “Three Pigeons” refer to the building’s octagonal shape that was originally believed to be a pigeon house.
Since changing its name to what it is today in 1872, locals call it The Fighters or The Cocks.  Cock fighting has been illegal since 1835. 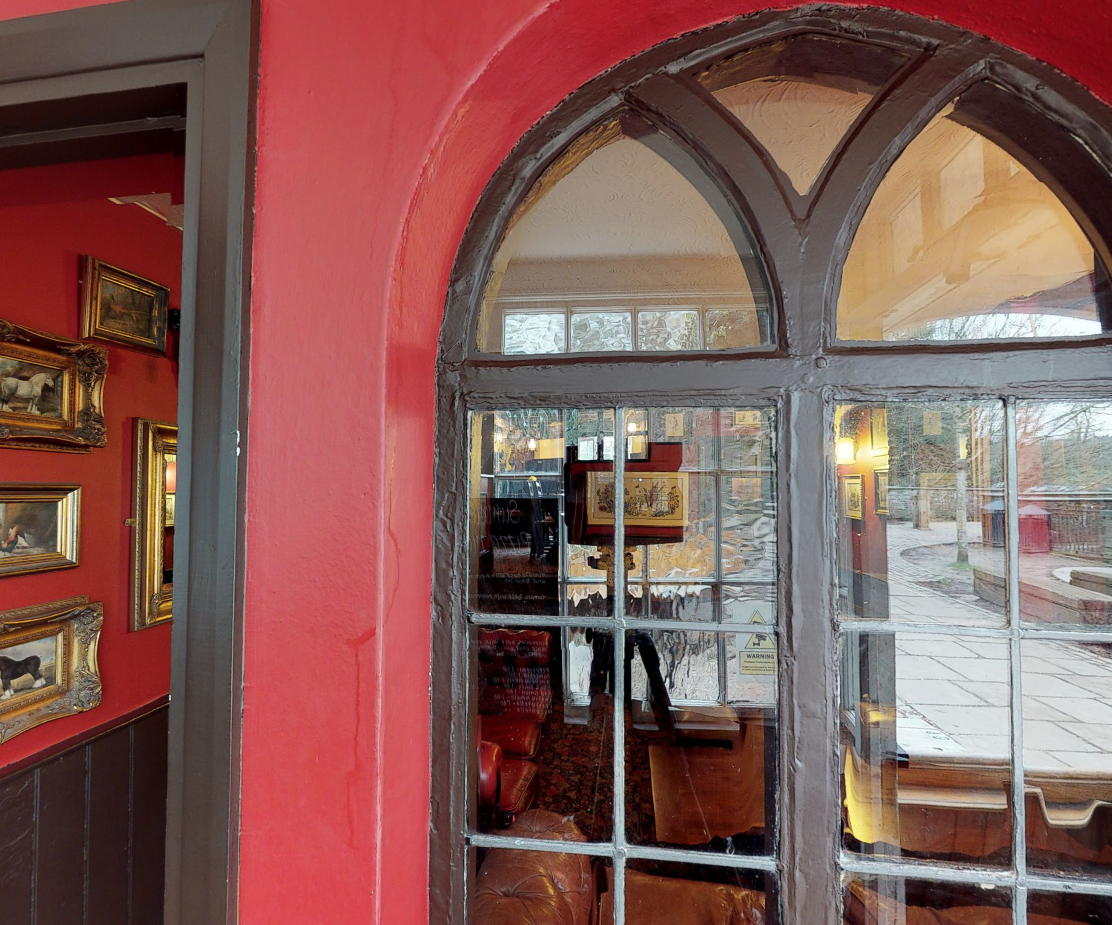 Historic England calls the Tudor era building “as being of 16th century appearance, but as the earliest date for which it can be proved to have been licensed is 1756 - and even that date is not certain - its claim to this record is somewhat uncertain.”

Others such as the Ye Olde Man & Scythe in Bolton, Greater Manchester and Ye Olde Trip to Jerusalem in Nottingham may have better claims.
Even in St Albans, the White Hart and the Fleur de Lys (currently called 'The Snug') have claims to have been trading as inns in the late medieval period.
There are rumors that ancient tunnels exist leading to Ye Olde Fighting Cock’s beer cellars.  It’s highly unlikely that the tunnels lead to the Cathedral grounds according to the Holy See.  Not to blather like a bubbly-jock we figure the tunnels might lead to the Roman Army bivouac near the river. Or, maybe not. 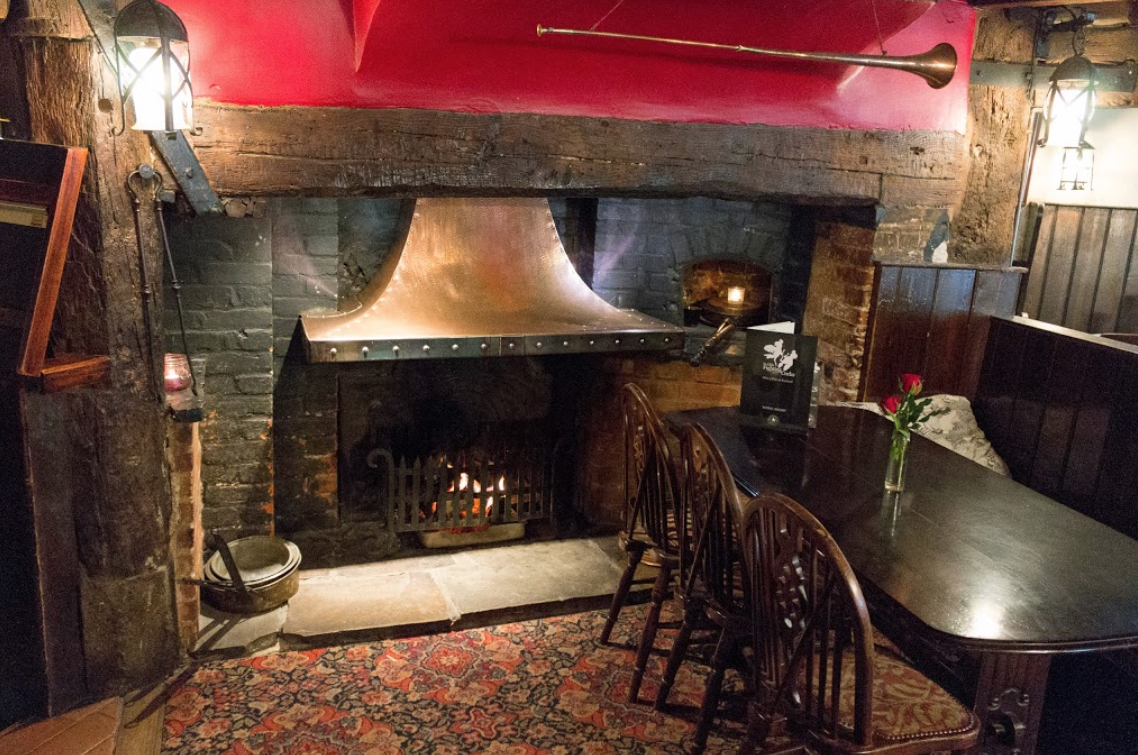 Other much ado topics discussed over a pint at the bar (or over dinner from the first rate kitchen) might involve the pub being featured in “The Sins of the Fathers,” a 1990 episode on the ITV series Inspector Morse.  Or, one might ruffle a few feathers by bringing up how in 2015 animal activists demanded the pub change its name to something less violent to chickens.  Ye Olde Clever Chickens Pub” was suggested as a better name but the landlord nixed it preferring to support the historical legacy of the pub.  Here, here.  One wag suggested instead PETA could go picket the chicken slaughterhouses near London.

But, all in all, you can’t drink architecture, history or spilt feathers. And, don’t let the gloomy Brit weather keep you from a drive to St. Albans because one must remember it ever rains inside a warm English pub.
The low-beamed woodsy pub is Northwest of London about an hour and a half drive on Highway M1. And, if you were to visit only a handful of vintage pubs out in the countryside one could do worse than Ye Olde Fighting Cocks. 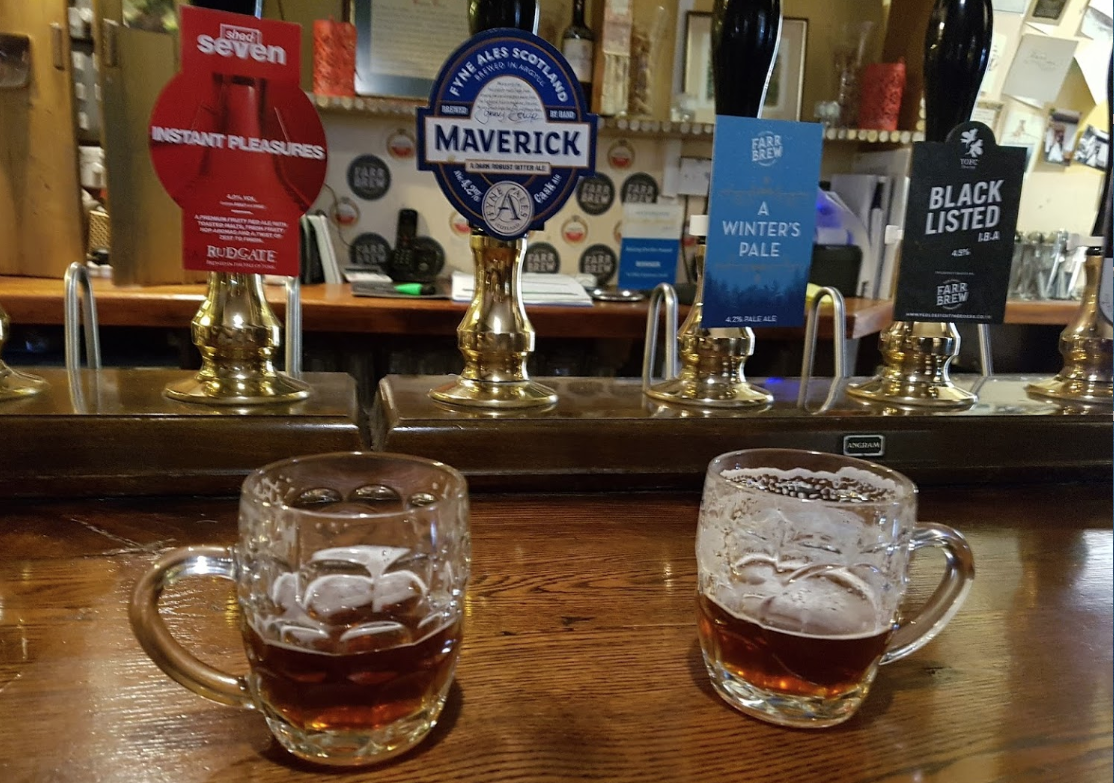 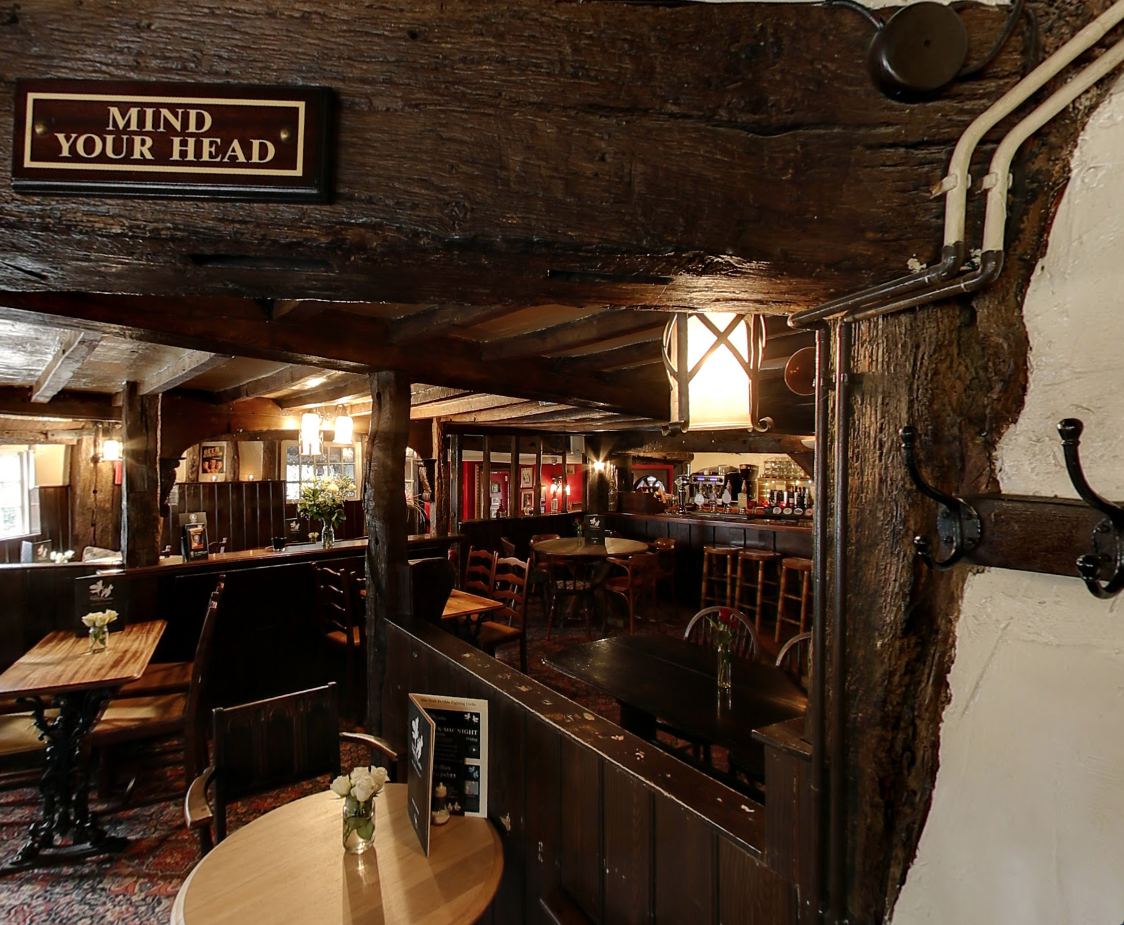