OH, DOCTOR--You have to be a special breed of sports fan to be loyal to the San Diego Padres, one of the few teams never to have won a Major League World Series championship.  Yet, for Padres fans “winning isn’t everything.”  Loyal Padres fans have other joys: great weather, a beautiful baseball park and of course, its long-time broadcaster Jerry Coleman.

Jerry, 89, died over the weekend because of complications following a fall.

San Diegans all have a favorite Jerry Coleman story.

As a kid growing up on Golden Hill, I watched on TV the San Diego Padres led by lefthander Bob Kerrigan win the 1954 Pacific Coast League pennant.  The game was at late, great Lane Field, which is still an empty lot at Pacific Coast Highway and Broadway.  It was one of the first games ever telecast in town.

Been a Padres fan ever since.

In 1969, my then infant son Zac went with me to see many games during the Padres first major league season.

Zac went on to college in the San Francisco Bay Area, where he graduated from college, eventually married, bought a home in Pleasant Hill near Walnut Creek. And, he’s a proud dad of two sons, the oldest being a left-handed pitcher for Concord de la Salle High school.

Of course, the grandsons, along with their dad are steadfast Padres fans. They claim they’re the only Pads fans in Pleasant Hill.

Zac and his brother Mike bought us tickets to opening day of the Padres first game in Petco Park in 2004.  Like so many, many others, we listened to our pocket radio’s while following the game in person.   We listened to Jerry Coleman.

Many of us in the audience teased Jerry for his malapropos, but we also listened to his every word when the Colonel screamed over the air that the San Diego Padres had the 1998 National League pennant wrapped around their shoulders.  “Oh, Doctor!”

When we learned that Jerry Coleman, patriot, US Marine fighter pilot in two wars, major league Hall of Famer, San Diegan and Padres broadcaster, passed away, it saddened an entire city, including my sons and family, especially our oldest grandson, Coleman Daniel Shess.

UPDATE: On the Wednesday following Jerry's death the student cheering section at the San Diego State basketball game vs. Boise State saluted Jerry and his famous catch phrase:  "You can hang a star on that one (great play)."  Pretty cool, Aztecs! 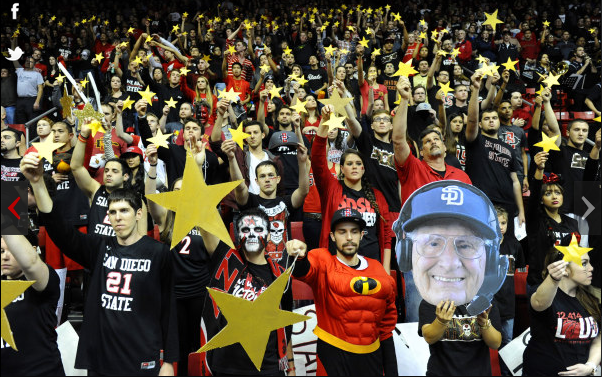