A BULLET FOR CINDERELLA (aka Eloise Warden) 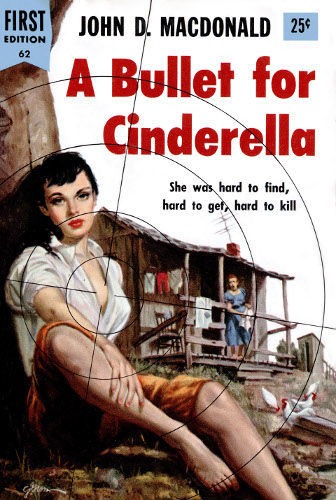 ONE
A steady April rain was soaking the earth. It hadn't been bad to drive through until dusk came. In the half-light it was hard to see the road. The rain was heavy enough to reflect my headlights back against the wind-shield. My mileage on the speedometer told me I couldn't be very far from Hillston.

When I saw the motel sign ahead on the right I slowed down. It looked fairly new. I turned in. The parking area was paved with those round brown pebbles that crunch under the tires. I parked as close to the office as I could get and ran from the car into the office. A woman with the bright cold eyes and thin sharp movements of a water bird rented me a room far back from the highway sound. She said the place was just four miles from the Hillston city limits.

Once I saw the room I decided that it would do. It would be a good place to stay while I did what had to be done in Hillston. I stretched out on the bed and wondered if I had been smart to use my right name on the motel register. But if I could find the money, there would be no one to say that I was the one who had taken it. And using my right name wouldn't make any difference at all.

When at last the rain eased up I went and found a small roadside restaurant. The girl behind the counter told me where I could buy a bottle of liquor. She seemed open to any invitation to help me drink it up, but though she was reasonably pretty I was not interested. I had this other thing on my mind and I wanted to go back alone and have some drinks and think about it and wonder how I could do it.

ABOUT THE AUTHOR: John Dann MacDonald (1916-1986) was an American writer of novels and short stories, known for his thrillers. MacDonald was a prolific author of crime and suspense novels, many of them set in his adopted home of Florida.

Maybe you saw pictures of us, the ones who were really bad off when the prisoners were exchanged. I was one of the litter cases. My stomach had stopped digesting the slop they fed us, and I was down to ninety-three pounds. One more week and I would have been buried up there beyond the river like so many others were. I was in bad shape. Not only physically but mentally. I was too sick to be flown back. Memory was all shot. I went right into hospital and they started feeding me through a tube.

It was during the months in the military hospital back in this country that I began to sort things out and began to remember more of the details about Timmy Warden of Hillston. When the intelligence people had interrogated me I had told them how Timmy died but nothing more than that. I didn't tell them any of the stuff Timmy had told me.

We were both captured at the same time in that action near the reservoir. I'd known him casually. He was in a different platoon. We were together most of the time after we were captured. Enough has already been written about how it was. It wasn't good.

That prison camp experience can change your attitude toward life and toward yourself. It did that to Timmy Warden. His one thought was to survive. It was that way with all of us, but Timmy seemed more of a fanatic than anybody else. He had to get back.

"What was it you wanted?"

"I'm not following this so good, Timmy."

He told me the story then. He had been in business with his brother George Warden. George was older by six years. George took him in as a partner. George had a flair for salesmanship and promotion. Timmy was good on the books, as he had a natural knack for figure work. They had a building supply business, a retail hardware outlet, a lumberyard, and several concrete trucks.

"I didn't make any play for her, Tal. It just seemed to happen. She was my brother's wife and I knew it was bad, but I couldn't stop. We had to sneak around behind his back. Hillston isn't a very big city. We had to be very careful. I guess I knew all the time what she was. But George thought she was the best thing that ever walked. She was the one who talked me into running away with her, Tal. She was the one who said we'd have to have money. So I started to steal."

He told me how he did it. A lot of the gimmicks didn't make much sense to me. He did all the ordering, handled the bank accounts and deposits. It was a big and profitable operation. He took a little bit here, a little bit there, always in cash. All the time he was doing it he was carrying on the affair with Eloise. He said it took nearly two years to squirrel away almost $60,000. The auditors didn't catch it.

"I couldn't open a bank account with the money, and I knew better than to put it in a safety-deposit box. I put the money in those old-fashioned jars. The kind with the red rubber washer and the wire that clamps the top on. I'd fill them and bury them.

George kept worrying about why we weren't making more money. I kept lying to him. Eloise was getting more restless all the time and more careless. I was afraid George would find out, and I didn't know what he'd do.

She had me sort of hypnotized. We finally set the date when we were going to run away. Everything was planned. And then they called me up. I was reserve. There wasn't a damn thing I could do about it. I told Eloise that when I got out we'd go through with it the way we planned. But now I'm stuck here. And now I don't want to go through with it. I want to get back there and give the money back to George and tell him the whole thing. I've had too much chance to think it over."

"How do you know she hasn't taken the money and left?"

"I didn't tell her where I put it. It's still there. Nobody can find it."

His story gave me a lot to think about. Timmy Warden sank lower and lower. By that time those of us who were left alive had become expert on how long the dying would last. And I knew that Timmy was one of the dying. I knew he'd never leave there alive. I tried to find out where the money was buried. But I'd waited a little too long. He was out of his head. I listened to him rave. I listened to every word he said.

But in his raving he never gave away the hiding place. It was in a moment of relative lucidity that he told me. It was afternoon and he caught my wrist with his wasted hand. "I'm not going to make it, Tal."

"No. You go back there and straighten it out. You can do that. Tell George. Give him the money. Tell him everything."

"Sure. Where is the money?"

"Cindy would know," he said, suddenly breathless with weak, crazy laughter. "Cindy would know." And that's all I could get out of him. I was still strong enough then to use a shovel. I helped dig the hole for Timmy Warden that night.

Back in the stateside hospital I thought about that $60,000. I could see those fruit jars with the tight rolls of bills inside the glass. I would dig them out and rub the dirt off and see the green gleam of the money. It helped pass the time in the hospital.

Finally they let me out. The thought of the money was no longer on the surface of my mind. It was hidden down underneath. I would think about it, but not very often. I went back to my job. It seemed pretty tasteless to me. I felt restless and out of place. I'd used up a lot of emotional energy in order to stay alive and come back to this, back to my job and back to Charlotte, the girl I had planned to marry. Now that I was back neither job nor girl seemed enough.

Two weeks ago they let me go. I don't blame them. I'd been doing my job in a listless way. I told Charlotte I was going away for a while. Her tears left me completely untouched. She was just a girl crying, a stranger. I told her I didn't know where I was going. But I knew I was going to Hillston. The money was there. And somebody named Cindy who would know how to find it.

I had started the long trip with an entirely unrealistic anticipation of success. Now I was not so confident. It seemed that I was searching for more than the sixty thousand dollars. It seemed to me that I was looking for some meaning or significance to my life. I had a thousand dollars in traveler's checks and everything I owned with me. Everything I owned filled two suitcases.
Charlotte had wept, and it hadn't touched me. I had accepted being fired without any special interest. Ever since the repatriation, since the hospital, I had felt like half a man. It was as though the other half of me had been buried and I was coming to look for it—here in Hillston, a small city I had never seen. Somehow I had to begin to live again. I had stopped living in a prison camp. And never come completely to life again.

I drank in the motel room until my lips felt numb. There was a pay phone in the motel office. The bird woman looked at me with obvious disapproval but condescended to change three ones into change for the phone.
I had forgotten the time difference. Charlotte was having dinner with her people. Her mother answered the phone. I heard the coldness in her mother's voice. She called Charlotte.

"Are you all right? You sound so strange."

"What are you doing? Are you looking for a job?"

"Not yet."
She lowered her voice so I could barely hear her. "Do you want me to come there? I would, you know, if you want me. And no—no strings, Tal darling."

"Thank you for calling, darling."

"Please write to me."

I promised and hung up and went back to my room. I wanted things to be the way they had once been between us. I did not want to hurt her. I did not want to hurt myself. But I felt as if a whole area in my mind was dead and numb. The part where she had once been. She had been loyal while I had been gone. She was the one who had the faith I would return. She did not deserve this.

MORE MACDONALD:
For the rest of the novel go to Project Gutenberg, the free online book service working with bringing public domain works of literature to e-books format.
http://www.gutenberg.org/files/49931/49931-h/49931-h.htm

MORE PROJECT GUTENBURG:
This eBook is for the use of anyone anywhere in the United States and most
other parts of the world at no cost and with almost no restrictions
whatsoever.  You may copy it, give it away or re-use it under the terms of
the Project Gutenberg License included with this eBook or online at
www.gutenberg.org.  If you are not located in the United States, you'll have
to check the laws of the country where you are located before using this ebook.