On a recent trip along old Highway 66, we stopped at the La Posada Hotel in Winslow, AZ to refresh ourselves, lunch and take in the vintage architecture of this old Fred Harvey inn.

The waitress approaching us wore a last century uniform of the Fred Harvey company, a string of late 19th and early 20th century restaurants sited inside hotels and/or train stations.

“Welcome to the Turquoise Room,” she beamed and handed us a large menu of American fare.  In the course of lunching we learned from her that in 1935, architect Mary Jane Colter was commissioned to design the private dining car for the Acheson, Topeka & Santa Fe railroad’s Super Chief, a train that was to run from Chicago to Los Angeles the following year.

The private dining car was named The Turquoise Room. The inaugural run started on Track 5 in Chicago’s Dearborn Station on May 12th 1936. Actress Eleanor Powell was named its first passenger and so began its illustrious flirtation with the Hollywood Stars of the day.

The Turquoise Room was a favorite of the studio chiefs and stars of the day for their private dining pleasure. When the La Posada was built management named the main dining room after the Turquoise Room aboard the Super Chief.

Today, the Turquoise Room is one of the southwest's unique restaurants, providing a mesmerizing interpretation of chef John Sharpe’s Arizona cuisine.  And, frankly, it is a gem that awaits all of us that travel off the beaten path. 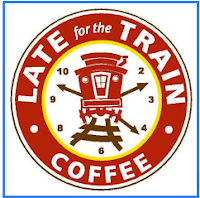 While not a fan of blended coffees, the Turquoise Room has commissioned its own delicious blend.  A cup of the Turquoise Blend complemented a fine lunch and set us off in a mood eager to continue searching for our next serendipity.

The La Posada’s coffees are roasted in Flagstaff by Late for the Train Coffee Company. The Turquoise Room Blend is advertised as a yin/yang of darkly roasted South American and medium roasted Indonesian beans.  The blend is 100% organic and comes in regular and decaf, espresso and decaf espresso in one pound bags.

LA POSADA HOTEL.
After visiting the worn down La Posada Hotel in 1994, Californians Allan Affeldt and his wife Tina Mion bought the property and linked with preservations to restore the La Posada to its original allure. The couple brought in a friend, John Sharpe, who is an experienced chef and restaurant executive to create the new and current Turquoise Room.

FRED HARVEY.
The late 19th century growth and development of the Fred Harvey Company was closely related to that of AT&SF. Under the terms of an oral agreement, Harvey opened his first depot restaurant in Topeka, Kansas in January 1876. Railroad officials and passengers alike were impressed with Fred Harvey's strict standards for high quality food and first class service. As a result, AT&SF entered into subsequent contracts with Harvey wherein he was given unlimited funds to set up a series of what were dubbed "eating houses" along most of the route. At more prominent locations, these eating houses evolved into hotels, many of which survive today. By the late 1880s, there was a Fred Harvey dining facility located every 100 miles along the AT&SF.

HARVEY GIRLS.
“The Harvey Girls: Opportunity Bound” is a new documentary film that tells the story of how over 100,000 railroad station waitresses opened up the doors of the American West and the workplace to women and changed history. It was a finalist for a James Beard Award, has been broadcast on over a dozen PBS stations and is currently touring museums across the country.
https://vimeo.com/ondemand/23102

ORIGINAL ARCHITECT.
Mary Elizabeth Jane Colter (April 4, 1869 Pittsburgh, Pennsylvania – January 8, 1958) was an American architect and designer. She was the decorator and architect for the Fred Harvey Company. Her buildings at the Grand Canyon and work for the Fred Harvey Company and AT&SF Railroad had a great influence on the popularity and development of the American Southwest. Colter designed the Bright Angel Lodge, Hermit's Rest, Hopi House, the Lookout Studio and Watchtower at the Grand Canyon. 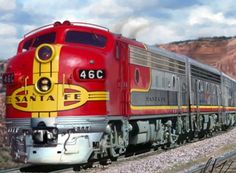