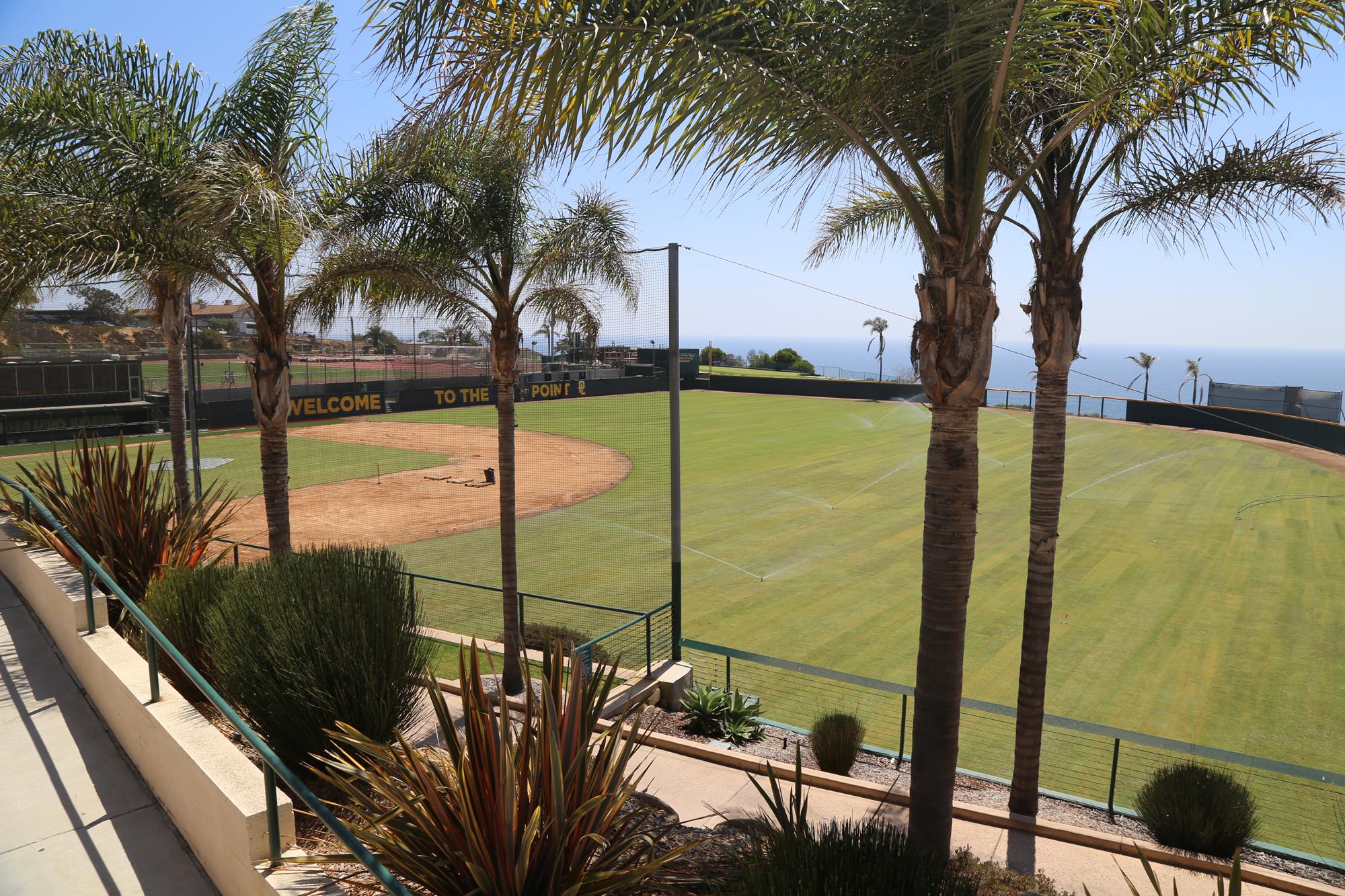 GUEST BLOG / By Matt Monagan, Major League Baseball--"It's a place you wanna come to work to every day." Most people, if they're being honest, don't say that about their jobs. Then again, most people aren't Steven Riddle; manager of athletic facilities at Point Loma Nazarene University.

Most of us don't get to work in baseball paradise -- along the breezy, dreamy Pacific coast of "America's Most Scenic Ballpark." Since the 1970s, the Point Loma Nazarene University Sea Lions have been lucky to call this seaside oasis -- dangling ever so gently off downtown San Diego -- home.

Baseball writer Kevin Kernan gave the ballpark its "Most Scenic" moniker in the mid-'90s -- a trademark the school has run with ever since. They put it on their scoreboard and all over their athletic website and, I mean, why not? It fits. "It's one of those ballparks where you're grateful to show up to every day," star PLNU infielder Otto Kemp told me. "You can never get too much of it."

"It can be taken for granted," head coach and former PLNU player Justin James said. "So every couple of days or so, I make sure to remind the guys to take a minute or two to remember and notice and be grateful for what we get. It's literally paradise." 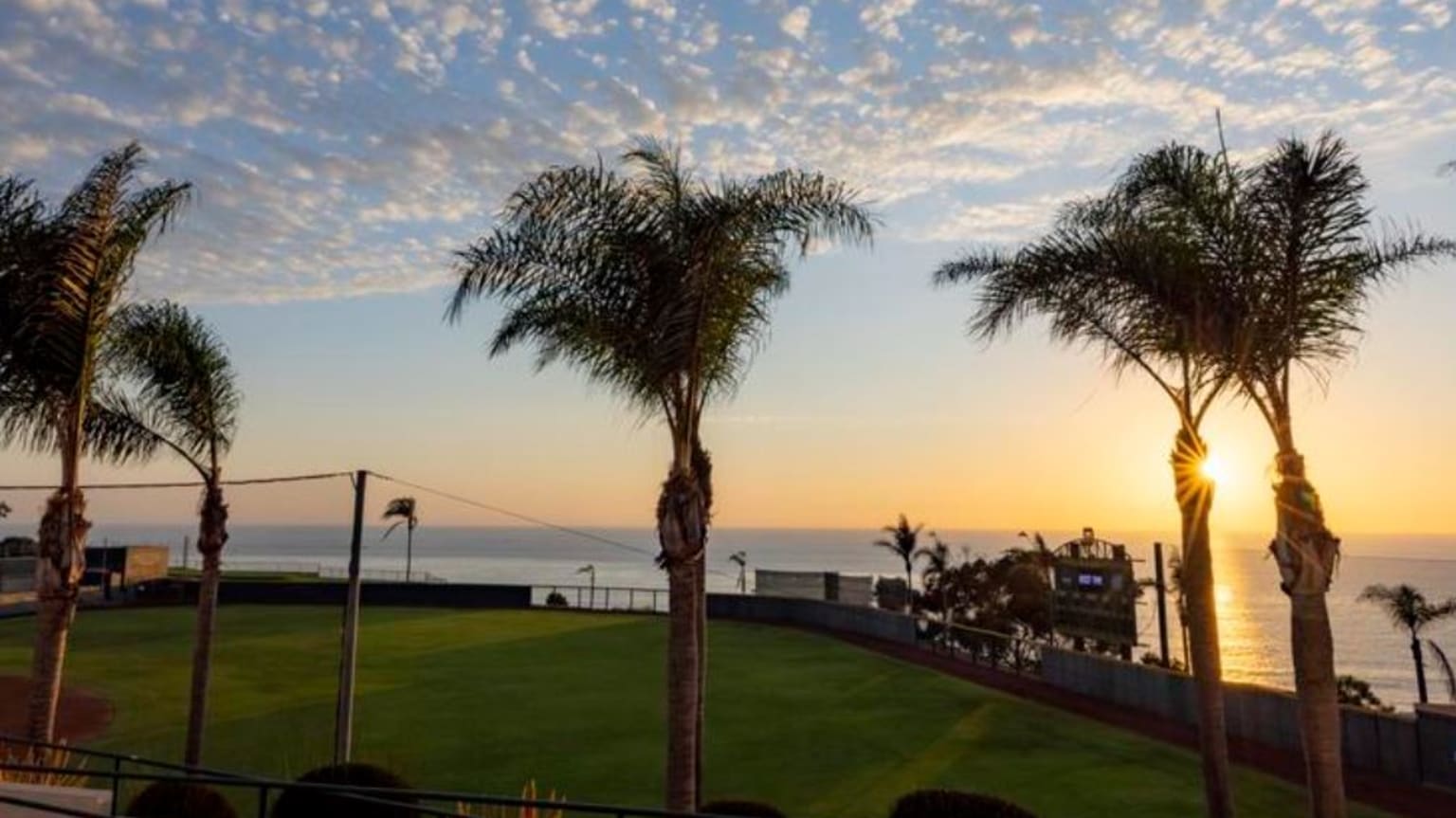 There have, of course, been some changes at Carroll B. Land Stadium over the years. Seats were added in from the old Anaheim Stadium to replace the concrete stands, the turf was extended from in front of the dugouts into the area behind home plate and a new scoreboard was put up in right field. But the school also made sure its changes didn't affect the most important part of the field: The view.

"It used to be a chain-link fence in the outfield, now it's padded," Riddle told me. "Except for what we call, 'Windows.' It's where we left the chain-link so people can see through, see the ocean, see all of what we have to offer." Kemp said he's not distracted by the "Windows" when he's up at-bat, but he could see why others who never play there might be.

"Luckily, in center field, there's a padded fence and just palm trees behind the batter's eye," the redshirt sophomore said. "But just to the right and the left, there's the chain-link fence that you can see through. Not too distracting for me because I've played there for so long, but ..." Kemp, who said the field helped him and others decide to play at PLNU, really enjoys seeing opposing players walk into the ballpark after playing in frigid temperatures in the Midwest.

"People wanna come and play at the warm, sunny, and 75-degree field," he said. "The first thing they do is take out their phones and take a picture from right field right when they're walking in. When they're stretching, they always run to the right-field corner to look at the view. That's when we know we got 'em." 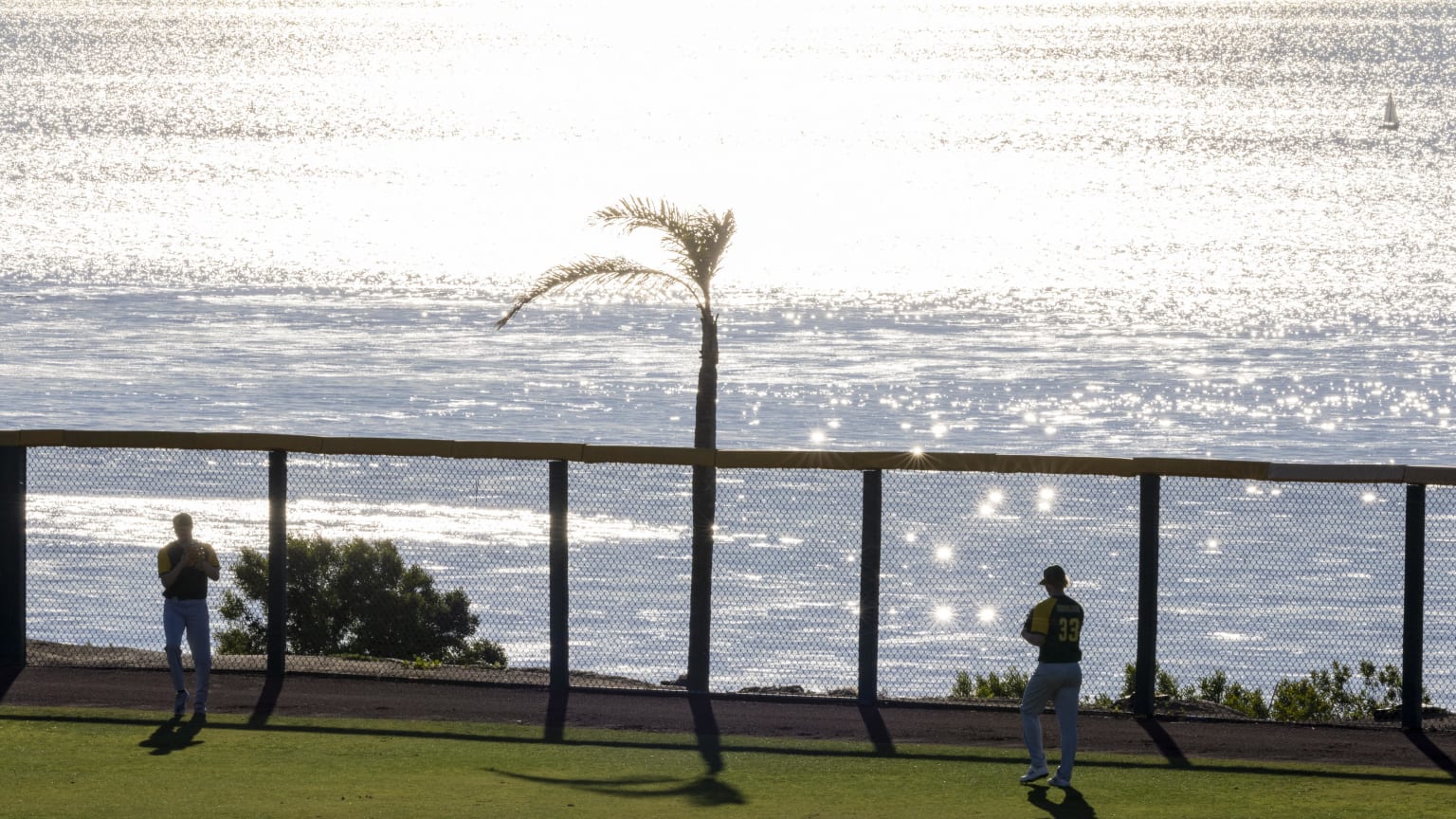 "When an opposing team and parents come to the field, their phones come out immediately," James said, laughing. "You walk out to right field and it looks right over the ocean. It's basically a postcard." And some people, with no real rooting interest, come to take in a game just for the beautiful confines. "I'll be near the field or something and I'll see people and I'll say, 'Can I help you?'" Riddle told me.

"'No, I was just in the area and I heard about America's Most Scenic Ballpark. I had to check it out for myself.'"

Although the ocean looks extremely close to the field -- like you might drop down into it if you take a step behind the fence -- it's actually a bit farther down from the ballpark. About a quarter of a mile away. There are trails to walk down to the beach, but that part of the university's land is mostly home to PLNU's six-time National Champion-winning surf team.

So, no, unfortunately, batters can't deposit dingers into the sea. In fact, it can be difficult to even hit a homer at the small-ish ballpark. "We get an on-shore breeze most days," Riddle told me. "So that makes the park play a lot bigger. We used to have guys that would come in and say, 'Oh man, I'm gonna hit three home runs today.' But then there's always the smart guy on the team, and the smart guy says, 'Dude, the wind's blowing in. You're gonna hit nothing but popups.'"

During some stormy afternoons, the winds can even kick up to 20 mph. "Last year, actually, there was a ball I specifically remember," Kemp said. "We were playing APU and it was a close game and a guy hit what he thought was a solo bomb. He definitely saw it go over the fence and it came back in because it was hit so high." Along with the picturesque environs, it helps that the on-field product is good: PLNU, a Division II program, has been to five World Series and started this season 10-0.

Kemp is slashing at a robust .386/.481/.796 line with four homers and 13 RBIs. Coach James noted they're "off to a great start." And on a cold February day in many parts of the country, you get the feeling that Riddle -- who's been overseeing the care of the field for 28 years -- has no place he'd rather be.

"Take today," he told me. "We don't have a cloud in the sky. There's no breeze right now. The field is prepped for a game. They're getting ready to come out for batting practice in about a half-hour. It is ... it's gorgeous." 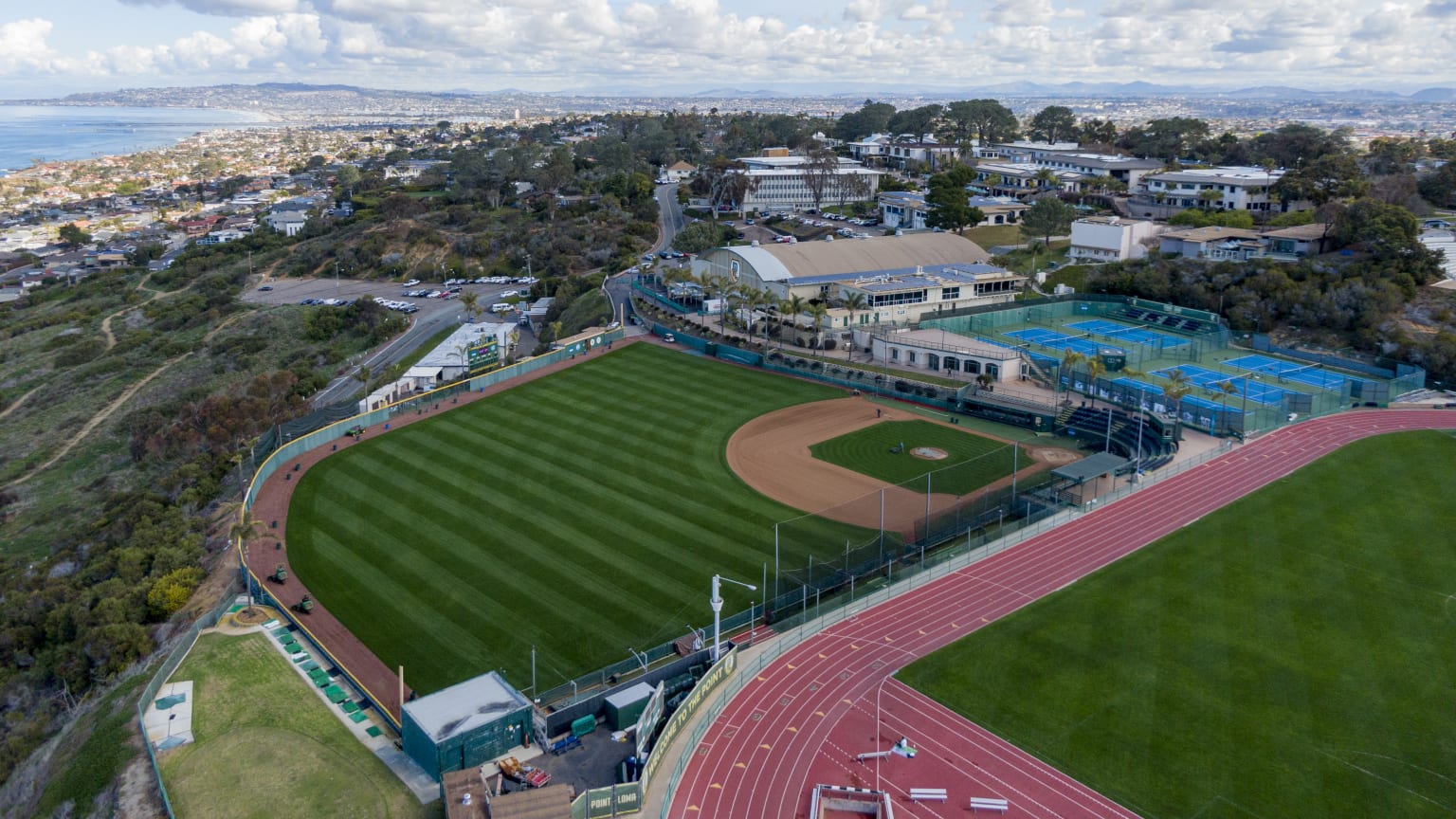 NOTES: Point Loma Nazarene University is a private Christian liberal arts college with its main campus on the Point Loma oceanfront in San Diego, California, United States. It was founded in 1902 as a Bible college by the Church of the Nazarene.

PLNU’S field is about a quarter of a mile from the Pacific. But in San Diego, it’s not the closest field to saltwater. MLB's Petco Park in downtown San Diego is about 1,500 feet from San Diego Bay. 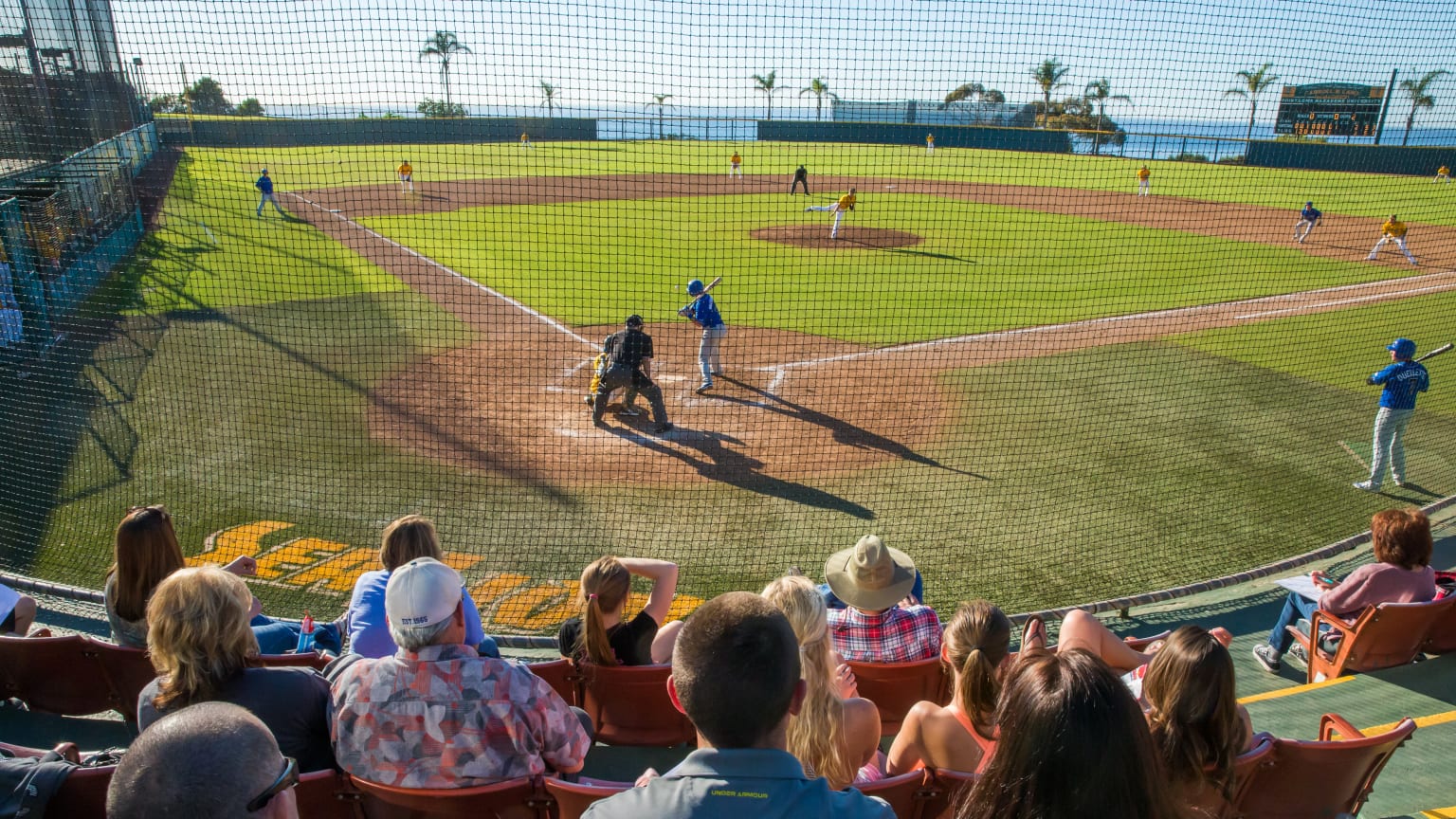 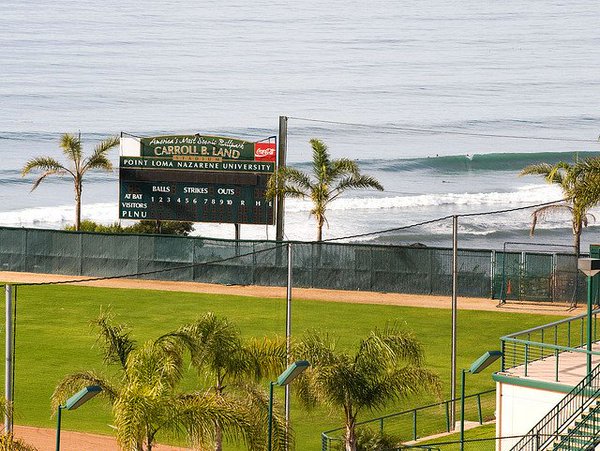 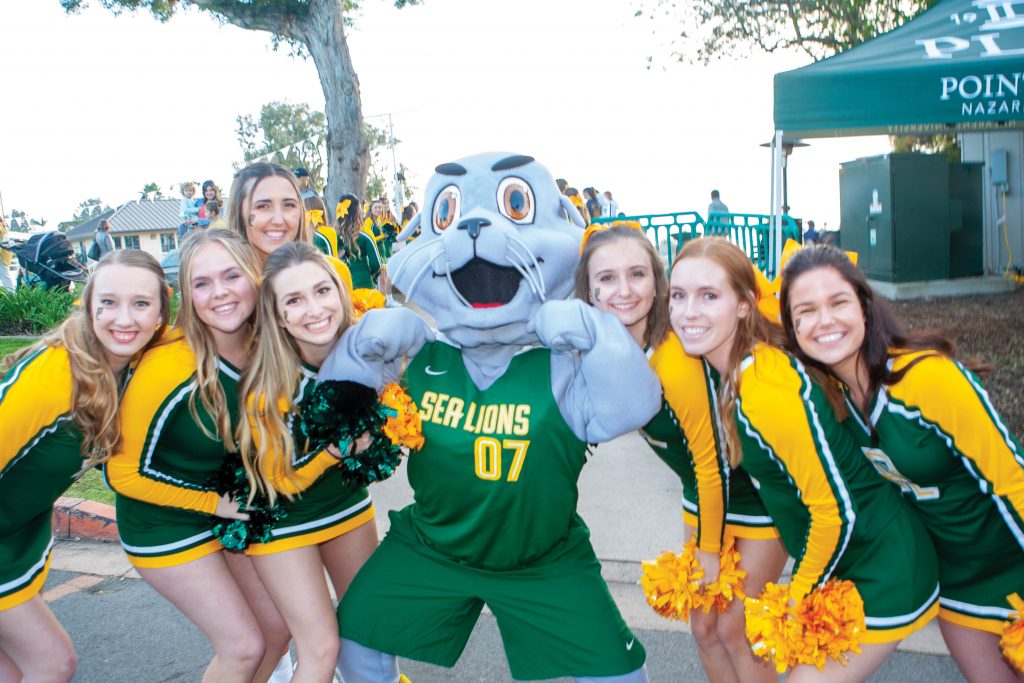