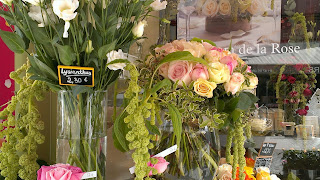 APRIL IN PARIS—We both admitted that if we were on our honeymoon the microscopic bathroom and one-person-at-a-time elevator in our hotel along Rue Cler would have been just fine.  Alas, after 28 years together, we decided when Paris calls again, we’ll stay someplace with larger facilities.  But, Rue Cler for our week’s stay this month was just fine.  Size-wise, small street (for fellow North Parkers), is the Ray Street of Paris, but only two blocks longer.

We’ll come back for the flowers in a heart beat, especially at Au Nom de la Rose and Les Floralies.  Both on Rue Cler in the 7th Arrondissement.

Rue Cler otherwise had so much to offer.  Several small cafe’s you expect to find in Paris, outdoor produce, a cheese and wine shop, several bakeries, a charcuterie and those colorful flower stands near our hotel.  Plus, what else made Rue Cler attractive was being near the Eiffel Tower and none of our Parisian cabbies knew where it was without checking their GPS.

Of course, there are countless more romantic rues in Paris, but this one just outside out hotel worked fine for us.

A delightful eight minute You Tube visit to Rue Cler can be found at:
http://www.youtube.com/watch?v=LdwbsMahz-I