PILGRIM POWER--On September 16, 1620, the Mayflower set sail for the New World. There were 102 passengers on board, most of whom were Pilgrims fleeing religious persecution. 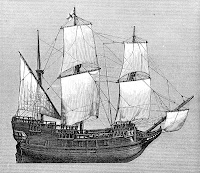 For two and a half months, the passengers and crew endured cold, sickness, bad food, leaks that threatened to scuttle the ship and storms that blew them far off course, before landing at what is now Provincetown, on Cape Cod, on November 21st. After determining that the area was not suitable for settlement, they landed at what is now Plymouth, Massachusetts, on December 21st.

Despite the hardships, it was a successful crossing for that time in history, as only one person died. Nearly a year later, the Pilgrims celebrated a good harvest with the first Thanksgiving in the New World.