NEWEST LINK--About 24 years ago, portions of the east end of the San Francisco-Oakland Bay Bridge collapsed during the October 17, 1989 Loma Prieta earthquake.  As of this week (Sep. 2), a $6.4 billion rebuilding of that eastern segment of the Bay Bridge has been completed and has opened to the public. 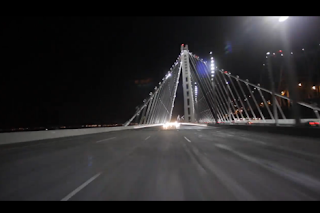 To celebrate the new span’s grand opening, the website of the San Francisco Chronicle newspaper produced the following video: http://www.sfgate.com/bayarea/article/Bay-Bridge-eastern-span-opens-4781385.php#media-86418

FYI:
--Designed by Charles H. Purcell and built by American Bridge Company, the San Francisco-Oakland Bay Bridge opened for traffic on November 12, 1936.
--During the Loma Prieta earthquake, which measured 6.9 on the moment magnitude scale, a 50-foot section of the upper deck of the eastern truss portion of the bridge at Pier E9 collapsed onto the deck below, indirectly causing one death, a 23-year old woman named Anamafi Maala, who was driving her car. The bridge was closed for just over a month as construction crews repaired the section. It reopened on November 18, 1989.