IN MICHIGAN OF ALL PLACES--The mission, if I chose to accept it and who wouldn’t, was to walk in the footsteps of the literary lion Ernest Hemingway and separate libational fact from fiction.

No, I wouldn’t be going to El Floridita Bar in Havana or to any of the many Harry’s Bars worldwide who claim Papa was a patron. Or to the bar in the Ritz Hotel in Paris where he raced on V.E. Day to toss back the first postwar Martini (someone beat him to it). Or to any number of saloons and watering holes where Papa reportedly sated his voracious and eclectic appetite for a drink.

That would be a mission impossible. Instead, I was heading for Petoskey, Mich, a small resort town on the shores of Lake Michigan where Hemingway spent his childhood and teen year summering with his family. His kin folk still live there on Walloon Lake.

Getting to Petoskey was no easy trick.  Luckily Southwest Airlines got me close.  I took a SFO to Chicago Midway nonstop roundtrip.
The luck didn’t extend to renting a car. Picking up my rental car from Thrifty at Midway took an hour and a half, an episode for another column. Suffice it to say the Thrifty counter was unstaffed, my complaints fell on deaf ears and the line behind me swelled to nine serious rent-a-car grumblers. When a manager finally showed up to open up, she was surly and unapologetic.

Thrifty did not have a car in the class I reserved, stuck me an extra $10 a day for a midsized car and when I walked out to pick it up, there were none—and, again, no apologies or a suggested solution. Only when I asked, “Can I take this Chevy?” did I get a car. I’m still wondering about the fate of the nine very annoyed business travelers in line behind me.

Getting out of Chicago in Friday afternoon traffic, even with the Chevy’s GPS, was hair-raising but once I hit Michigan, the Wolverine state’s highways were smooth, spotless and practically empty. Five hours later I was in the quaint hamlet of Petoskey.

Before hitting the bars I figured, it’s wise to  book a room and I was not up for a B&B. Locals touted me on to Stafford’s Perry Hotel, circa 1899, last of 24 luxury resorts that once catered to privileged vacationers who arrived by railcars, steamships or ferries.. But the Perry today, painted a canary yellow, reminded me of a dolled up but still charmless boarding house and the walk-up rates for a double were $120 to $139 nightly.

When in doubt or in strange small town, there’s usually always a bargain Hilton or a Marriott.  In Petoskey, the 77-room Hampton Inn and Suites is architecturally boring but stylish and friendly inside. Front desk clerk Jenica Collins, who has the presence and personality to work in Hilton’s upmarket Conrad brand, labored mightedly to give me a great rate. She started at $119 a night, barraged me with questions, and, when I said I was a business traveler, whittled it down to $79 a night including what turned out to be hearty breakfast.

Ensconced, I headed over to the City Park Grill (www.cityparkgrill.com) at 432 E Lake St., renowned for its excellent American comfort food, reasonable prices, live music but better known as the bar where Ernest Hemingway hung out and drank. Opened in 1910, it has long promoted the story that young Hem was a regular on barstool number two; his handsome bearded visage stares down from the backbar to the spot where he supposedly sat.

The bartender on duty in the high-ceilinged, wood-paneled bar and grill was burnishing that legend with patrons. I asked him what the aspiring writer drank in those early days? “Beer and Scotch,” was his answer. But when I wondered if Hemingway turned “mean” when he powered down more than a couple cocktails—the description of his mood change I’ve heard over the years from two people who claimed to have drank with him--the bartender went ice cold and stone silent.

Recovering a few moments later, he said, “Hemingway was a private person, quiet. Maybe someone mistook that for mean.”

From that point on, he committed the barman’s unpardonable sin—ignoring the customer. While we ate at the vintage bar –split a hamburger and a bowl of Jambalaya topped off with a husky Manhattan, $5.50 during the daily 4:30 pm to 6:30 pm “happy hour” --we got the silent treatment. Michigander Phyllis Joiner serving as my guide was stunned. “He just froze you out, she said.”

Some deeper investigative reporting revealed the City Park Grill isn’t quite the Hemingway haunt we’re led to believe, and certainly not the site of barroom exploits he’s famed for the world over. Sure, he may have watched bare knuckle boxing in the park next door, and it’s true he wrote magazine stories in his $8 a week room in Mrs. Potter’s nearby unheated boarding house—and all were rejected

But Michael Federspiel, executive director of the local Little Travis Historical Society and author of “Picturing Hemingway’s Michigan” (Painted Turtle Books, Detroit), shatters the myth with a strong dose of facts: “Prohibition was law in Poteskey 10 years before 1919 when it became the law of the land,” he said. Translated, the town was dry when Hemingway was said to be elbow bending at the City Park Grill. “He was a teen and might have had a soda at the bar,”’ Federspiel muses.

“Or he might have had a drink in the room downstairs where (diners) went during Prohibition. But then he left for World War I where he drove an ambulance.”

Hemingway returned to Poteskey after the war, got married down the road in Horton Bay in 1921 to Miss Hadley Richardson where he is not remembered fondly for cruelly lampooning residents in his Nick Adams books. After the nuptuals, the couple  immediately moved to Chicago. He did not come back for 25 years, writes Federspiel. But by then he was a bloated 265 pounds, was living in Havana, on his way to Sun Valley—and just passing through. 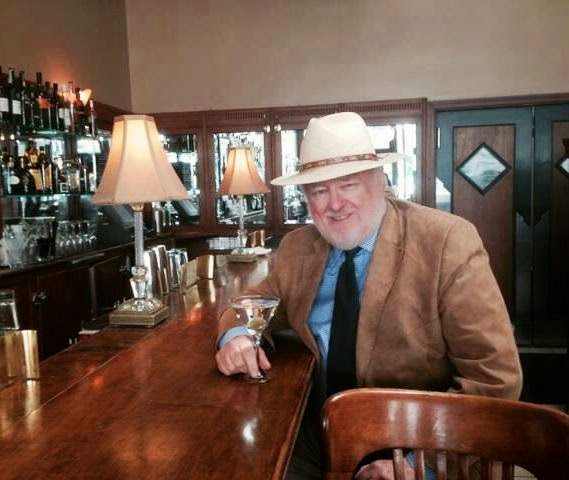 San Francisco-based Chris Barnett got his first gig as a saloon scribe in 1972 when then Editor-in-Chief Tom Shess asked him to pen “In Search of the Great California Saloon” for PSA Airlines’ inflight magazine. Forty-two years later, Barnett’s liver is still in good health.  His saloon writing career is still flourishing.