"I did nothing to you.  I was innocent.  All the accusations against me were false- I thought you knew." --Anne Boleyn

On this day in 1536, the neck of Anne Boleyn offered little resistance to the metal sword, which instantly severed her head from her body as she knelt erect on the scaffold.  Her flesh is gone but her short life remains a fascination 499 years later. And, a few say she never really left as Anne’s ghost has been seen inside the millennium-old Tower of London, the site of her execution.

Anne Boleyn’s ghost is obviously not content with being seen only at the Tower of London.  This enterprising spectre has opened a franchise at several locations: Hever Castle, Salle Church, Marwell Hall and Blickling Hall in Norfolk, where at the latter she has reportedly been seen riding into the courtyard of the Hall in a carriage of headless horses, while holding her head under her arm (with blood still seeping from the wound). Legend has it this apparition appears at Blickling Hall at Midnight on the eve of her execution day, May 19, 1536.  Blickling is the Boleyn’s ancestral Jacobean-style manor, where Anne was born in 1507.

Meanwhile back at the Tower of London, a legendary sighting (all reputed, of course) is described by Hans Holzer, who said J.D. Dundas, an officer in the 60th Rifles was looking out of his tower quarters when he noticed a guard below in the courtyard behaving oddly.  Standing in front of the lodgings where Anne had been imprisoned, the guard appeared to challenge something or someone, which to Major General Dundas “looked like a whitish, female figure sliding toward the soldier.”  The guard challenged the form with his bayonet, then fainted.  Only his superior officer’s testimony at the court martial saved the guard from imprisonment for feinting while on duty.

Reportedly, Anne’s body was left unattended on the scaffold for sometime until a tower worker placed her in an arrow box.  She was buried the same day in an unmarked spot inside the tower church St. Peter ad Vincula.  Her ghost has been seen inside the church walking down the aisle to her grave under the altar.

As recent as 1933, newspaper accounts reported a tower guard fled his post after a ghost walked into his bayonet.  That sounds like a version of the previous ghost/guard story.

Sightings have occurred at Hever Castle in Kent, where Anne met Henry VIII.  She’s been seen among her favorite castle haunts when she was alive.

Anne has appeared standing at the window in the Dean’s Cloister at Windsor Castle.

One legend says she is buried at Salle Chapel.

At Hampton Court she has been spotted wearing a blue or black dress and many times she appears headless.


In the Tower of London, Anne penned this poem:

Oh Death
Rock me asleep
Bring on my quiet rest
Let pass my very guiltless ghost
Out of my careful breast
Ring out the doleful knell
Let it sound
My death tell
For I must die.

WITNESS TO THE EXECUTION
Queen Anne Boleyn on the day of her execution, Friday, 19, May 1536
From a letter from Sir W. Kingston, Constable of the Tower, to Thomas Cromwell, May 19th, 1536.

“This morning she sent for me, that I might be with her at such time as she received the good Lord, to the intent I should hear her speak as touching her innocency alway to be clear. And in the writing of this she sent for me, and at my coming she said, "Mr. Kingston, I hear I shall not die afore noon, and I am very sorry therefore, for I thought to be dead by this time and past my pain ". I told her it should be no pain, it was so little. And then she said, "I heard say the executioner was very good, and I have a little neck", and then put her hands about it, laughing heartily. I have seen many men and also women executed, and that they have been in great sorrow, and to my knowledge this lady has much joy in death. Sir, her almoner is continually with her, and had been since two o'clock after midnight.”

ANNE’S FAREWELL ADDRESS
8 am.  Recorded by Edward Hall with spelling that has been modernized.

“Good Christian people, I am come hither to die, for according to the law, and by the law I am judged to die, and therefore I will speak nothing against it. I am come hither to accuse no man, nor to speak anything of that, whereof I am accused and condemned to die, but I pray God save the king and send him long to reign over you, for a gentler nor a more merciful prince was there never: and to me he was ever a good, a gentle and sovereign lord. And if any person will meddle of my cause, I require them to judge the best. And thus I take my leave of the world and of you all, and I heartily desire you all to pray for me. O Lord have mercy on me, to God I commend my soul.”

After being blindfolded and kneeling at the block, she repeated several times: “To Jesus Christ I commend my soul; Lord Jesu receive my soul.”
--Recorded by Edward Hall (spelling modernized)

CONTEMPORARY BIOGRAPHY
Wikipedia provides a lengthy biography of Anne Boleyn:http://en.wikipedia.org/wiki/Anne_Boleyn.
Where else will you find the signature of Anne Boleyn? 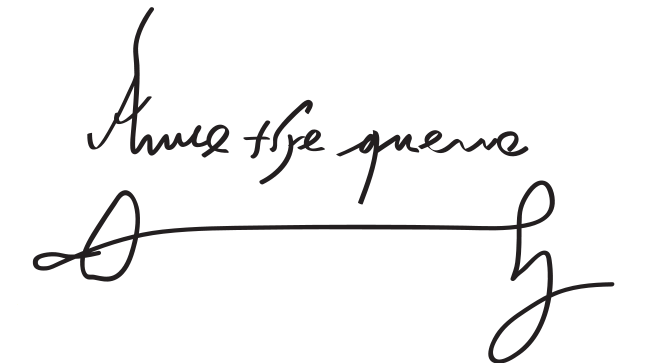