SIN DIEGO: TURNING THE OTHER CHEEK—San Diego History Center (Balboa Park) is cataloging the infamous Stingaree neighborhood’s transformation from “Vice to Nice” with an ongoing exhibition now through November 2, 2014. 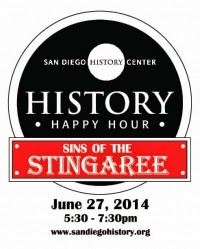 The program showcases the development, and eventual "clean up" of San Diego's infamous redlight district. The district existed between 1st and 6th Avenues (west-east) and from H (today Market Street) to the bay (north-south).

According to the History Center, the term "Stingaree" originated by people who visited the neighborhood and got fleeced or stung (like a sting from a stingray) by the many vices the district possessed. During its heyday around the turn of the 20th Century, the Stingaree boasted 71 saloons, 120 bawdy houses, opium dens, and gambling establishments. San Diego's waterfront became "synonymous with sin," according to the more conservative elements of the day, and rivaled San Francisco's Barbary Coast and New York's Bowery Districts.
The neighborhood also became a melting pot of nationalities from all over the globe. Wyatt Earp, while living in San Diego for two years during the "Boom of the 1880s," had his residence and business just outside the district.

Prior to the 1915 Panama-California Exposition, a city-backed effort to cleanup the vice elements within the Stingaree destroyed many of the structures deemed to be sanitation and health hazards and shipped off some of the prostitutes outside the city. But the problem of vice persisted.

Prohibition in the 1920s created a black market for liquor and in the 1930s, the forces of the Great Depression never allowed the neighborhood to improve it's image. With the buildup of military personnel throughout the city prior to World War 2, servicemen frequented the many locker rooms throughout the old Stingaree to shed their military clothes for street clothes, allowing them to partake in the bars, peep shows, and other nefarious activity that combat-bound soldiers and sailors often partake in. The phrase, "don't go south of Market Street" was common.

In the 1950s, the effects of suburbanization meant that people and businesses moved from downtown's core, taking jobs and opportunity with them, depressing property values. Soon San Diego's downtown, like others around the country at this time experienced urban decay (or urban blight).

It wasn't until the 1970s when a group of concerned citizens decided to reclaim and revitalize downtown. Backed by the legislation of of the National Historic Preservation Act of 1966, suddenly it became cost-effective to save the old downtown buildings symbolizing San Diego's past and became an incentive to attract business back to downtown. The first project, undertaken and overseen by the Centre City Development Corporation (CCDC) was the Gaslamp District and the renovation of Horton Plaza. Historic buildings were renovated and turned into commercial and mixed-use properties that today generate income for the city and entertain and service (safely) the millions of visitors to the city.
-----------
See additional article on the shady ladies of the Stingaree District: