WHY WE LIVE IN CALIFORNIA /Highway One


BIXBY BRIDGE—If this span were a Hollywood movie, the Bridge over Bixby Creek on U.S. Highway One along the Pacific Ocean, was well cast.  Its architecture blends with the beauty of this romantic highway and gorgeous central California coastline.  Today, this reinforced concrete, open-spandrel arch bridge, is one of the most photographed bridges in the West.

Yes, even Pillar to Post blog recently stopped to snap the photo above.  It is a breathtaking engineering project amid the splendor of Big Sur.

Bixby Creek takes its name from Charles Henry Bixby, from Livingston County, New York, who arrived on the Monterey Peninsula in 1868. He purchased large tracts of land in the Big Sur area and harvested the lumber, producing shakes, shingles, railroad ties, trench posts and tan bark. He processed these through a sawmill built along the creek and shipped them from a landing he built on the coast. 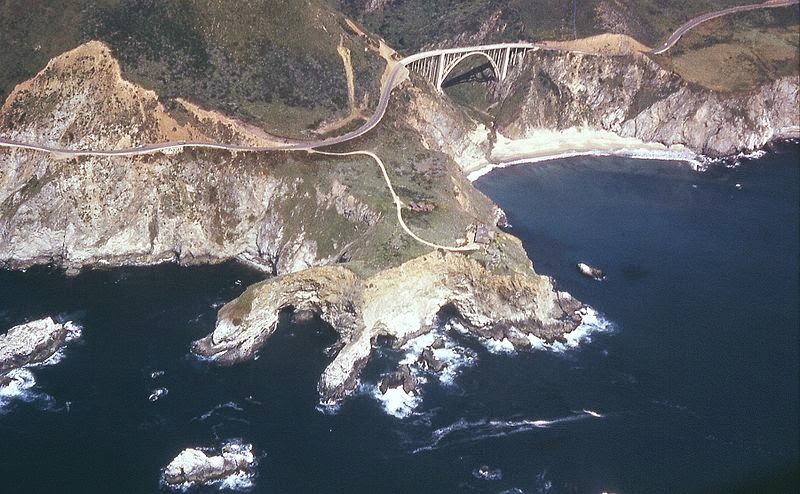 Thanks to Wikipedia, we can once again remember the hard working designers and construction crews, who championed Bixby Bridge.  The state awarded a contract for $203,334 to the lower bidder, Ward Engineering Company of San Francisco, on August 13, 1931.[7] Construction began on August 24, 1931.[7]

More than 300,000 board feet of Douglas fir timber, used to build a 250-foot high falsework to support the arch during construction, was transported from the railroad terminal in Monterey over the narrow, one-way road to the bridge site. The falsework, built by crews led by E.C. Panton, the general superintendent, and I.O. Jahlstrom, resident engineer of Ward Engineering Co., was difficult to raise, because it was constantly exposed to high winds.

It took two months to construct the falsework alone. When high waves threatened the falsework foundation, construction was halted for a short time until winter storms abated.

The crews excavated 4,700 cubic yards of earth and rock and used 45,000 sacks of cement during construction. Eight hundred twenty-five trucks brought in 6,600 cubic yards cubic yards of concrete and 600,000 pounds of reinforcing steel. Sand and gravel were supplied from a plant in Big Sur.

Crews began pouring concrete on November 27. The cement was transported from Davenport, near Santa Cruz, and from San Andreas. Material was transported across the canyon from platforms using slings suspended from a cable 300 feet above the creek. 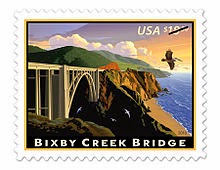 Speaking of Hollywood as we alluded earlier, the bridge is simply an aesthetic wonder and because of its scenic location it has been cast in TV and films like TV’s “Then Came Bronson” and movies “Play Misty for me” and “The Sandpiper.”  Bixby Bridge is also the star of countless car commercials.
The bridge was commemorated in an Express mail stamp issued on February 3, 2010. The United States Postal Service introduced a $18.30 definitive stamp designed by Carl T. Herrman of North Las Vegas, Nevada. The stamp features a color digital illustration of Bixby Creek Bridge in California, by Dan Cosgrove of Clarendon Hills, Illinois.