SUNDAY REVIEW/ “A WORK OF ART” FROM THE MASTER OF THE SHORT STORY: ANTON CHEKHOV

A WORK OF ART
By Anton Chekhov

Sasha Smirnov, the only son of his mother, holding under his arm, something wrapped up in No. 223 of the Financial News, assumed a sentimental expression, and went into Dr. Koshelkov's consulting-room.

"Ah, dear lad!" was how the doctor greeted him. "Well! how are we feeling? What good news have you for me?"

Sasha blinked, laid his hand on his heart and said in an agitated voice: "Mamma sends her greetings to you, Ivan Nikolaevitch, and told me to thank you. . . . I am the only son of my mother and you have saved my life . . . you have brought me through a dangerous illness and . . . we do not know how to thank you."

"Nonsense, lad!" said the doctor, highly delighted. "I only did what anyone else would have done in my place." 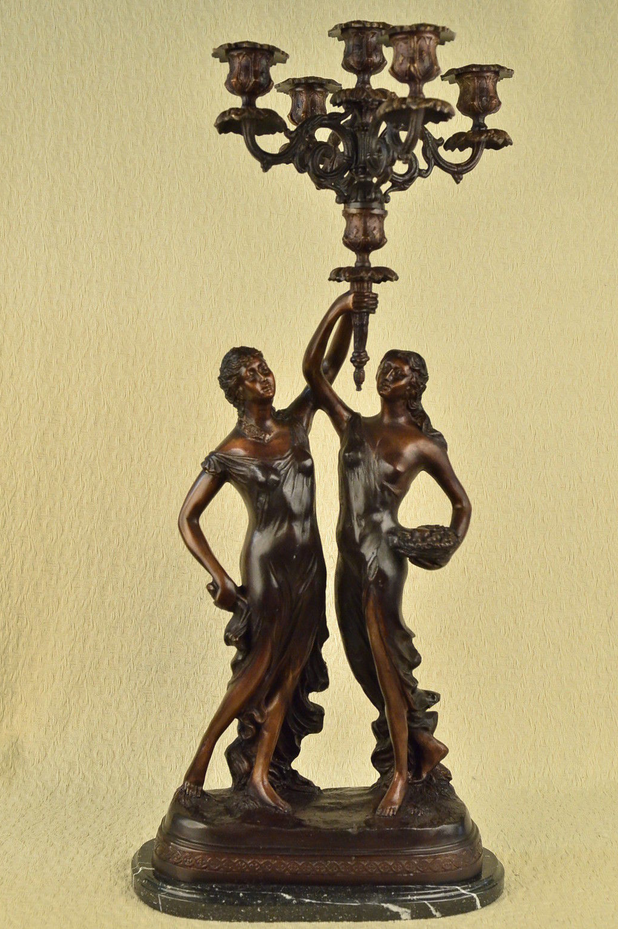 "You shouldn't!" said the doctor, frowning. "What's this for!"

"No, please do not refuse," Sasha went on muttering as he unpacked the parcel. "You will wound mamma and me by refusing. . . . It's a fine thing . . . an antique bronze. . . . It was left us by my deceased father and we have kept it as a precious souvenir. My father used to buy antique bronzes and sell them to connoisseurs . . . Mamma and I keep on the business now."

Sasha undid the object and put it solemnly on the table. It was a not very tall candelabra of old bronze and artistic workmanship. It consisted of a group: on the pedestal stood two female figures in the costume of Eve and in attitudes for the description of which I have neither the courage nor the fitting temperament. The figures were smiling coquettishly and altogether looked as though, had it not been for the necessity of supporting the candlestick, they would have skipped off the pedestal and have indulged in an orgy such as is improper for the reader even to imagine.

Looking at the present, the doctor slowly scratched behind his ear, cleared his throat and blew his nose irresolutely.

"The serpent-tempter himself could not have invented anything worse . . . . Why, to put such a phantasmagoria on the table would be defiling the whole flat."

"What a strange way of looking at art, doctor!" said Sasha, offended. "Why, it is an artistic thing, look at it! There is so much beauty and elegance that it fills one's soul with a feeling of reverence and brings a lump into one's throat! When one sees anything so beautiful one forgets everything earthly. . . . Only look, how much movement, what an atmosphere, what expression!"

"I understand all that very well, my dear boy," the doctor interposed, "but you know I am a family man, my children run in here, ladies come in."

"Of course if you look at it from the point of view of the crowd," said Sasha, "then this exquisitely artistic work may appear in a certain light. . . . But, doctor, rise superior to the crowd, especially as you will wound mamma and me by refusing it. I am the only son of my mother, you have saved my life. . . . We are giving you the thing most precious to us and . . . and I only regret that I have not the pair to present to you. . . ."

"Thank you, my dear fellow, I am very grateful . . . Give my respects to your mother but really consider, my children run in here, ladies come. . . . However, let it remain! I see there's no arguing with you."

"And there is nothing to argue about," said Sasha, relieved. "Put the candlestick here, by this vase. What a pity we have not the pair to it! It is a pity! Well, good-bye, doctor."

After Sasha's departure the doctor looked for a long time at the candelabra, scratched behind his ear and meditated.

After long meditation he thought of his good friend, the lawyer
Uhov, to whom he was indebted for the management of legal business.
"Excellent," the doctor decided, "it would be awkward for him as a friend to take money from me, and it will be very suitable for me to present him with this. I will take him the devilish thing! Luckily he is a bachelor and easy-going."

Without further procrastination the doctor put on his hat and coat, took the candelabra and went off to Uhov's.

On seeing the bronze the lawyer was moved to indescribable delight.

"What a specimen!" he chuckled. "Ah, deuce take it, to think of them imagining such a thing, the devils! Exquisite! Ravishing! Where did you get hold of such a delightful thing?"

After pouring out his ecstasies the lawyer looked timidly towards the door and said: "Only you must carry off your present, my boy . . . . I can't take it. . . ."

"Why?" cried the doctor, disconcerted.

"Nonsense! Nonsense! Don't you dare to refuse!" said the doctor, gesticulating. "It's piggish of you! It's a work of art! . . . What movement . . . what expression! I won't even talk of it! You will offend me!"

But the doctor gesticulated more violently than before, and dashing out of the flat went home, glad that he had succeeded in getting the present off his hands.

When he had gone away the lawyer examined the candelabra, fingered it all over, and then, like the doctor, racked his brains over the question what to do with the present.

"It's a fine thing," he mused, "and it would be a pity to throw it away and improper to keep it. The very best thing would be to make a present of it to someone. . . . I know what! I'll take it this evening to Shashkin, the comedian. The rascal is fond of such things, and by the way it is his benefit tonight."

No sooner said than done. In the evening the candelabra, carefully wrapped up, was duly carried to Shashkin's. The whole evening the comic actor's dressing-room was besieged by men coming to admire the present; the dressing-room was filled with the hum of enthusiasm and laughter like the neighing of horses. If one of the actresses approached the door and asked: "May I come in?" the comedian's husky voice was heard at once: "No, no, my dear, I am not dressed!"

After the performance the comedian shrugged his shoulders, flung up his hands and said: "Well what am I to do with the horrid thing? Why, I live in a private flat! Actresses come and see me! It's not a photograph that you can put in a drawer!"

"You had better sell it, sir," the hairdresser who was disrobing the actor advised him. "There's an old woman living about here who buys antique bronzes. Go and enquire for Madame Smirnov . . . everyone knows her."

The actor followed his advice. . . . Two days later the doctor was sitting in his consulting-room, and with his finger to his brow was meditating on the acids of the bile. All at once the door opened and Sasha Smirnov flew into the room. He was smiling, beaming, and his whole figure was radiant with happiness. In his hands he held something wrapped up in newspaper.

"Doctor!" he began breathlessly, "imagine my delight! Happily for you we have succeeded in picking up the pair to your candelabra! Mamma is so happy. . . . I am the only son of my mother, you saved my life. . . ."

And Sasha, all of a tremor with gratitude, set the candelabra before the doctor. The doctor opened his mouth, tried to say something, but said nothing: he could not speak.