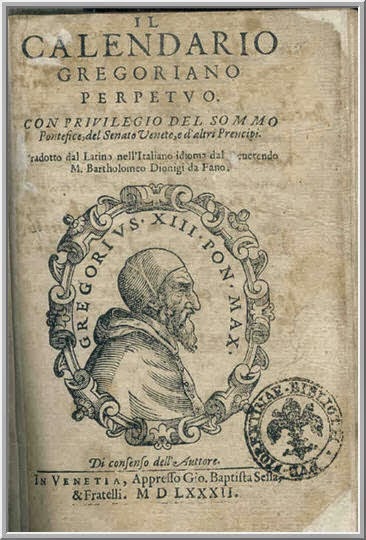 Editor’s Note: This guest blog on the history of modern calendars is from WebExhibits.org, an interactive museum of science, humanities, and culture.  Launched in 1999, the site can be found at http://www.webexhibits.org/

Evolution of Our Calendar from Pope (1582) to Playboy (1954)
Pope Gregory XIII dedicated his papacy to implementing the recommendations of the Council of Trent. By the time he reformed the Julian calendar in 1582 (using the observations of Christopher Clavius and Johannes Kepler), it had drifted 10 days off course. To this day, most of the world uses his Gregorian calendar.

But, hundreds of years later, monks were the only ones with any free time for scholarly pursuits – and they were discouraged from thinking about the matter of "secular time" for any reason beyond figuring out when to observe Easter. In the Middle Ages, the study of the measure of time was first viewed as prying too deeply into God’s own affairs – and later thought of as a lowly, mechanical study, unworthy of serious contemplation.

As a result, it wasn’t until 1582, by which time Caesar’s calendar had drifted a full 10 days off course, that Pope Gregory XIII (1502 - 1585) finally reformed the Julian calendar.

Ironically, by the time the Catholic church buckled under the weight of the scientific reasoning that pointed out the error, it had lost much of its power to implement the fix. Protestant tract writers responded to Gregory’s calendar by calling him the "Roman Antichrist" and claiming that its real purpose was to keep true Christians from worshiping on the correct days. The "new" calendar, as we know it today, was not adopted uniformly across Europe until well into the 18th century.

Here are a few more historical aspects of our calendar.

Has the year always started on 1 January?
In some ways, yes. When Julius Caesar introduced his calendar in 45 B.C.E., he made 1 January the start of the year, and it was always the date on which the Solar Number and the Golden Number were incremented.

However, the church didn’t like the wild parties that took place at the start of the new year, and in C.E. 567 the council of Tours declared that having the year start on 1 January was an ancient mistake that should be abolished.

Choosing the right interpretation of a year number is difficult, so much more as one country might use different systems for religious and civil needs.

The Byzantine Empire used a year starting on 1 Sep, but they didn’t count years since the birth of Christ, instead they counted years since the creation of the world which they dated to 1 September 5509 B.C.E.

Since about 1600 most countries have used 1 January as the first day of the year. Italy and England, however, did not make 1 January official until around 1750.

What is the origin of the names of the months?
A lot of languages, including English, use month names based on Latin. Their meaning is listed below. However, some languages (Czech and Polish, for example) use quite different names.

April
Aprilis
Named either after the goddess
Aphrodite or the Latin word aperire, to open.

November
From the word novem, nine, because
it was the 9th month in the old
Roman calendar.

Why does February have only 28 days?
January and February both date from about the time of Rome’s founding. They were added to a calendar that had been divided into ten month-like periods whose lengths varied from 20 to 35 or more days. A winter season was not included, so those period lengths are believed to have been intended to reflect growth stages of crops and cattle.

When introduced, January was given 29 days and put at the beginning of the calendar year. February was given 23 days and put at the end. Then, for an undetermined period shortly after Rome’s founding, months were said to have begun when a new moon was first sighted. At some later time, month lengths were separated from lunations and again became fixed. At that time, February’s original length was extended by five days which gave it a total of 28

Why does the Playboy Playmate of the Year and Calendar appear in January?
The "duh" answer is because January is the first month and that's the best way to start any calendar.  But, in the magazine industry, January is one of the toughest months to sell advertising because the selling period is during the year end holidays.  Madison Avenue's attention is hard to get during the party season.  So, magazine's make sure they make their January issues special.  Playboy puts its popular Playmate of the Year feature in that month to ensure advertisers show up.