BALBOA PARK’S BRIDGE FOR ALL TIME

EXPO CENTENNIAL--The tall, almost languid arches of Balboa Park’s historic Cabrillo Bridge are an apt metaphor for the 1915-16 Panama-California Exposition for which the span was built.  The famed expo was San Diego bringing attention to itself as a wannabe world-class city/port worthy of participating in a new era of commerce ushered in by the 1912 completion of the Panama Canal.
Roman era aqueduct style defines the shape of the seven-arch span, while the light stucco-like cement façade recalls California Mission and Spanish Colonial revival vernacular.  The bridge and the adjacent California Tower, when visually linked, became the image most of us associate with Balboa Park and the Exposition, which ran from March 1915 to January 1917.
The 120-foor tall bridge is also one of four structures to survive to date.  The others are the Spreckels Organ Pavilion, the Botanical Garden and the California Quadrangle.
Began in 1912 and completed two years later, the 900-foot long traverse became the western portal to the Expo linking Bankers Hill with the Park’s main central mesa. Then public works director Frank P. Allen, Jr. led design and construction of the viaduct in coordination with engineer Thomas B. Hunter.  Historians credit both with the creation of the bridge.
Concrete forms for the bridge piers were built with a million-feet of redwood and reinforced with steel supports.  More than 3.7 million visitors attended the first expo, which created enough revenue to cover the fair’s overall costs, including the $250,000 spent on the bridge.
A 2004 fire of suspicious origin (one of many in the park’s history) caused enough damage that CalTrans rescued the structure with modern infrastructure.  Otherwise, the Cabrillo Bridge remains as functional and postcard pleasing since its April 13, 1914 completion date
On that date, Franklin D. Roosevelt, as Assistant Secretary of the Navy was in the first motorcade crossing El Prado (the real name of the west to east street atop the span) to open the 1915-16 Expo.  FDR was to repeat the crossing on October 1, 1935—this time as U.S. President--to symbolically open the California Pacific International Exposition of 1935-36. 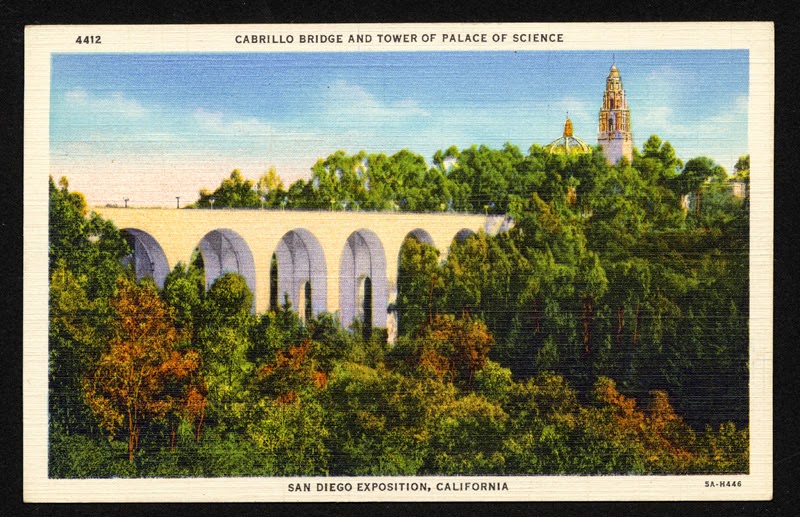