When Havana waiter Ray Mely heard last week that a VIP was scheduled to dine that evening at the Cuban restaurant he worked at he and the rest of the staff thought it was nice, but it wasn’t a new thing because Restaurante San Crisobal has had top name guests before like Mick Jaggar, Jay-Z and Beyonce to mention a few.

It wasn’t until the big black limo pulled up outside the paladar style restaurant (residence turned into a public restaurant) that the whole world knew that Michelle, Natasha (“Sasha”) and Malia Ann and President Barack Obama were those VIPs.

“Well, hello, Mr. President. Good evening, I am Ray. I'm going be your waiter. I'm here to assist all of you.”

“Ray, it is an honor for us,” said President Obama.

The First Family dined at San Crisobal, a newer paladar restaurant, in Havana on day one of the President’s historic trip to Cuba (the first U.S. President to set foot on the island since Calvin Coolidge did in 1928).

It was easy to see everyone was having a good time thanks to photos by White House photographer Pete Sousa.  The Obamas were seated in what used to be the home bedroom of restaurant owner Raiza Perez before she converted the lower floors of her family’s townhouse into her popular eatery in the historic Havana Vieja neighborhood.  Her husband is the head chef.  Our spy at the restaurant was too busy gawking and didn’t get chef’s name.

Meanwhile, after ordering, waiter Ray, who spoke excellent English, asked if he should bring wine to the table, the President said he had to work in the morning so no wine for him, but Michelle had a glass with dinner. 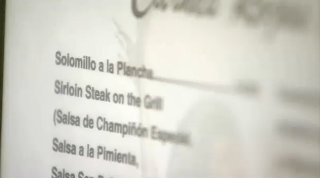 Everyone ordered off the menu and according to reporters covering the event, Obama ordered "solomillo a la plancha," steak on the grill, medium-well with a side of vegetables. The Obama daughters ate steak and pork, and Michelle Obama had sliced steak.  Cuban Coffee was served after dinner.

Cuba may be a dictatorship, but dinner with the Obamas was an exercise in democracy: everyone pays.  The President reached in his wallet to cover the $80 tab($US) plus tip. 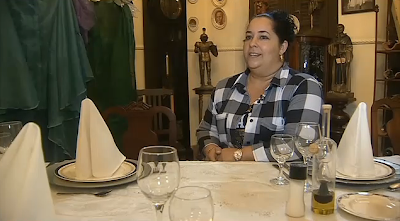